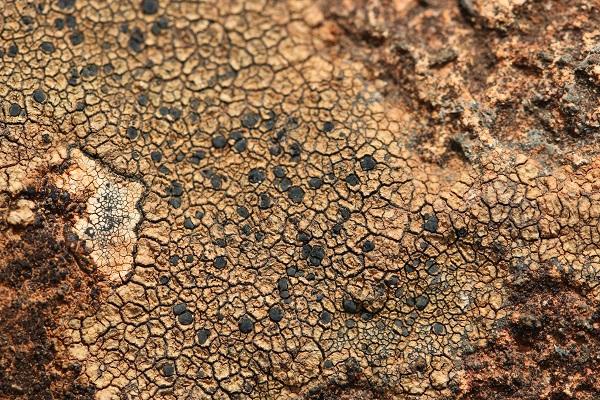 Prof Stefan Siebert from the Unit for Environmental Sciences and Management at the North-West University (NWU), together with academics from various American universities, recently described two new lichen species, the first discoveries of its kind in three decades. Lichens are a complex life form that is a symbiotic partnership between two separate organisms, a fungus and alga.

These two species were discovered during a National Geographic Society (NGS) expedition to study the lichens of serpentinites in Mpumalanga.

According to Prof Stefan, serpentinites are greenish, metamorphic rocks found along the renowned Barberton Greenstone Belt (Makhonjwa Mountains). This belt is home to some of the oldest exposed rocks on earth.

“The serpentinites are interesting in that they hold extremely high concentrations of heavy metals, such as nickel. This creates a toxic environment for most plant life and species associated with these rocks are highly specialised to survive,” says Prof Stefan. The NGS expedition set out specifically to target lichens, a poorly studied group, and to understand their association with these rocks.

During this pioneering survey, Scoliciosporum fabisporum was discovered. It was named after its distinct bean-shaped ascospores. This was an interesting find, as it was the first discovery of a new lichen species from serpentinite, and could be the first of many unknowns from these harsh environments.

Prof Stefan adds that the biggest discovery of the entire expedition was made in Buffelskloof Nature Reserve south of Mashishing in Mpumalanga. “Not only was a new species of lichenised fungi discovered at the base of the Calodendron Falls, but it also proved to be a new genus. This species is so distinct in its genetic make-up that it groups separately from other known lichen genera. So Burrowsia cataractae is a really an exceptional find for South Africa,” says the professor.

The genus was named in honour of John and Sandie Burrows, two prominent and passionate stalwarts for plant conservation in South Africa. The name of the species refers to its habitat at the base of a waterfall.

Prof Stefan states that the two species were added to South Africa’s list of 1 766 species – a number that is widely regarded by international lichenologists to be a far cry from South Africa’s true diversity of probably 3 000 species. This estimate is based on the size of the country and its diverse plant life.

The NWU applauds Prof Stefan and his American colleagues. The university looks forward to more lichen species being discovered.