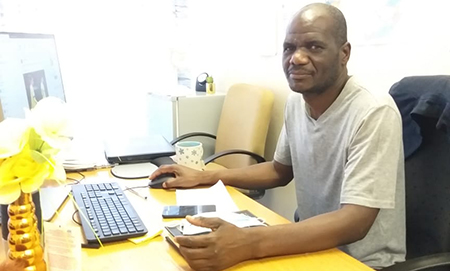 The study found that most of the violence within schools is gang related and that weapons are sometimes used in altercations. It also revealed that learners who engage in violence are often under the influence of drugs.

Teaching is often seen as a calling rather than a career. But that calling quickly turns into a nightmare when teachers are attacked by the very people they are trying to educate.
Over the past few years, there have been numerous reports in the media of learners physically assaulting, stabbing and even shooting their teachers.
Dr Michael Nhambura, a North-West University (NWU) alumnus, conducted his PhD study on learner violence at schools.
The study, titled “Handling of violent behaviour of learners in secondary schools: A case study of Vryburg Cluster in North-West Province”, was conducted between 2017 and 2019 under the supervision of Dr Joyce Dhlamini from the Faculty of Education.

A war zone
Dr Nhambura says 18 educators from three secondary schools participated in the study. The data was collected through focus groups, in-depth interviews with 15 teachers and one-on-one interviews with three principals.
“The amount of violence that occurs at schools affects teaching and learning, making schools unsafe, not only for the teachers but also for pupils,” says Dr Nhambura.
The study found that most of the violence within schools is gang related and that weapons are sometimes used in altercations. It also revealed that learners who engage in violence are often under the influence of drugs.

Trying to solve the problem
According to Dr Nhambura, the family organisation and structure, school and community environment have a great influence on the behaviour of learners.
The study found that, in order to manage violence in secondary schools effectively, teachers need support from the Department of Basic Education, parents and other stakeholders.
Schools mainly rely on policies and their disciplinary committees to help manage learner violence. While in the classroom, teachers try and implement various strategies to stop these outbursts.

Dr Nhambura adds that his research has given rise to the development of a psycho-educational and psycho-social intervention programme on managing violence in secondary schools.
This research is unlikely to be the end of Dr Nhambura’s quest to understand why some learners are so violent. He recently wrote a chapter in an academic book on this very topic. No doubt, educators and parents alike will be eager to learn more about what can be done to manage the escalating problem of violence at schools.