Dr Nittin Essoo has built a highly successful education brand in Mauritius by offering British degree courses without the need to live in the UK. British quality education and certification without the cost of living in the UK proved to be a very popular concept for young Mauritians.

The numbers are showing that the prospect of Brexit Britain is not appealing to international students. Brexit brings economic uncertainty and a hostile immigration environment. British universities are warning that international students, worth £26bn to the UK economy, will opt for countries such as the US, Canada and Australia instead. Already Australia has moved ahead of the UK as the second biggest destination for overseas students.

Quality British education, however, remains the preferred option for many. Dr Essoo sees the opportunity to take a model of offering British education in Mauritius and expand internationally, with opportunities already identified in East Africa and in Europe.

In this interview, Dr Essoo offers an interesting insight into the speed of change in the current global education ecosystem.

AfricaLive: Tell us about Rushmore Business School role in the Mauritian education system and your ties with British education.

Dr Nittin Essoo: The reason we have been successful is because we have brought British education to Mauritius. People can do a British degree with us without having to be in the UK. They will get exactly the same qualification as they would get if they were in the UK, with absolutely no difference at all.

AfricaLive: What was the inspiration to begin the Rushmore project and to bring UK education to Mauritius? What is the personal story behind the business school?

We decided we would like to start a business and spoke to some British universities to see if there was interest. Sixteen years ago there was no British involvement in the higher education system here, it was all local in fact with nobody offering international courses.

There was one University interested to work with us, which was the University of Birmingham and they offered us their MBA programme. We came back to Mauritius and set it up, starting with 25 students. We went on to graduate 250 students. It was a lot of work then because at first the lecturers and professors would come over from the UK to teach the programme and we just facilitated the programme by doing the recruiting and the marketing.

It was later we realised we can teach the courses ourselves by recruiting locally and this allowed us to set up new partnerships, diversify and offer new programmes.

We now offer around 60 programmes all the way up to PhD level. By the local legislation in Mauritius, we can’t call ourselves a University but to all intents and purposes, we are!

Like all new companies we had challenges all the way but we have been lucky to have great partners which have helped us grow. It helps we do this out of passion and not pure commercial interest. We have always added innovative courses and not the standard courses the Universities here are offering. For example, we now offer a course in aircraft engineering which is very ambitious but it is working well.

We have had our ups and down over the years. In about 2005, Mauritius amended the education act to encourage more of the private sector to get involved in education. We had been there since 2002 but in 2005 we started to see an increase in providers and a lot of competition. However, by then we were well established and were able to expand and develop further.

Now we find that the landscape is going back to how it was around ten years ago. There are a few quality education providers here while the others have disappeared. It happens in every country in the world. There are those who come with a “fly by night” approach of cashing in and then getting out.

Those of us who built their campus and were dedicated to education have remained.

We built the campus here seven years ago and it is purpose-built for our needs. We can accommodate 1500 students, which in Mauritius is a lot! I think we are doing quite well.

What does the future hold?

We are now looking at expansion.

What markets are you looking at expanding in to now?

Well, this is going to surprise you.

A lot of Europeans, particularly from eastern Europe, study in the UK either for their full degree or for one term or one year through exchange programmes such as Erasmus.

We are also looking at the African continent. We are looking at setting up a campus in Eastern Africa.

This would be the plan, to have campuses in Mauritius, Eastern Africa, and Europe offering the same courses and offer students mobility between the three campuses. Students from Europe could spend some time in Africa and some time in Mauritius and see three different cultures. We would then be a truly international school or University.

Possibly nobody else has mentioned this to you? Everyone is very focused on bringing students here but we would like to go out from Mauritius to Africa and Europe.

What do you need to drive this expansion? Are you looking for partners?

We want to concentrate on the marketing and recruiting students and not worry overly about getting land or constructing buildings.

We will bring the business, the know-how, and the courses and we are looking for partners that would provide the infrastructure.

When you are travelling overseas what is one thing that people find unexpected about Rushmore and about Mauritius?

I think people are surprised that we have been able to attract so many British institutions to Mauritius when it is such a small market. The market may be small but the purchasing power is there and the market is there. I think this is the misconception people have about Mauritius.

As a lot of people imagine us also on the beaches under the coconut trees, they are surprised that there is a lot of business taking place here. Now we have many foreign partners talking with us and investing with us once they understand the size and potential of the market.

How do you ensure that the output of the school is relevant and matches the needs of industry?

We work very closely with industry.

Every programme that we introduce on the island is discussed with business leaders to make sure it meets their needs. Very often it is really taken apart by them actually! We often revise a lot of the programmes to make sure it is relevant to industry. 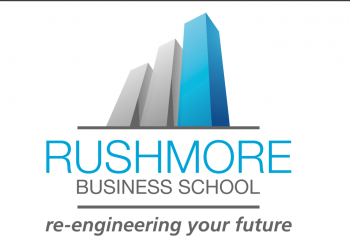