How does one solve the issue of unsustainable fishing? Conservation zoologist Tim McClanahan was pondering that question when he started a research project looking at overexploited coral reef fisheries in Kenya in the 1990s.

“It was a lifetime goal … because it’s one of those big unanswered questions,” McClanahan, a senior coral reef scientist at the Wildlife Conservation Society, told Mongabay. “And I had no idea how long it would take to solve the problem.”

He initially expected the project to take about six or seven years, but it ended up taking 24, culminating in a paper published in the June 2021 issue of the journal Marine Policy. The study looked at two interventions to overfishing in Kenya: the prohibition of all fishing activity in a marine reserve, and a ban on destructive small-meshed dragnets. The paper found that while both methods boosted the number of target species caught over the study period, the marine reserve ultimately provided more long-term benefits in terms of sustainability.

“I’m not a true believer in reserves,” McClanahan said. “I could have easily been convinced otherwise. Part of why I took 24 years to solve this problem is because I’m that cautious personality [and I wanted] to make sure that these things were correct to the best of my knowledge, and that any conclusions were sustainable over the long term.” 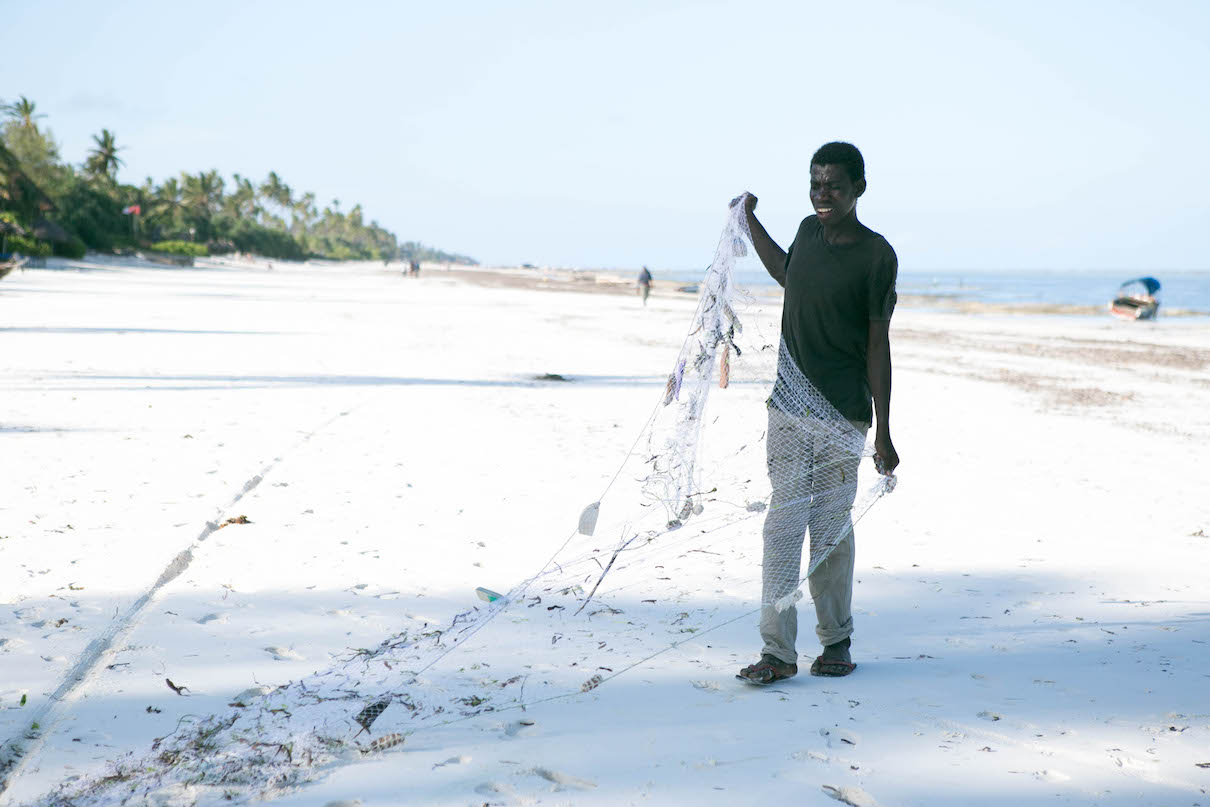 A Kenyan fisherman arranging his net on a beach. Image by Emily Darling / WCS.

According to a 2020 report by the Food and Agriculture Organization (FAO) of the United Nations, only about 65% of the world’s fish stocks were within biologically sustainable levels in 2017. In 1990, that number was 90%. Despite this sharp decline in the sustainability of harvests in less than 30 years, experts anticipate that global fish production will continue to swell in the coming years, growing from 179 million metric tons in 2018 to 204 million metric tons in 2030.

The need to preserve fish stocks is just one reason why there have been calls to protect at least 30% of the world’s oceans in marine protected areas (MPAs) by 2030. At the moment, only 2.7% of the global ocean is fully protected, although individual nations have already committed to protecting large swaths of sea within their own jurisdictions. For instance, the small island country of Palau has protected 78% of its waters, while the United States has protected 23%. Most other nations, however, are far from meeting this goal.

Some studies have shown that MPAs — which, in their strictest application, ban all fishing activity — help marine animals recover within their boundaries. These growing populations can, in turn, expand into adjacent areas that are open to fishing via a “spillover effect.” Other studies, however, have suggested that managing a fishery rather than banning (or severely curtailing) all fishing can be just as effective in helping to protect vital fish stocks.

But the problem with most studies is that they are conducted over a short time period and rely heavily on modeling rather than real data, says McClanahan.

One of the only other studies that examines the efficiency of an MPA over a long period of time is a 2013 paper published in Nature Communications, McClanahan said. It found that a Roman sea bream (Chrysoblephus laticeps) population in South Africa doubled over a 10-year period due to a fishing closure in an MPA. While the total fishing yield in the vicinity of the MPA initially went down, it eventually recovered six years after the establishment of the MPA. 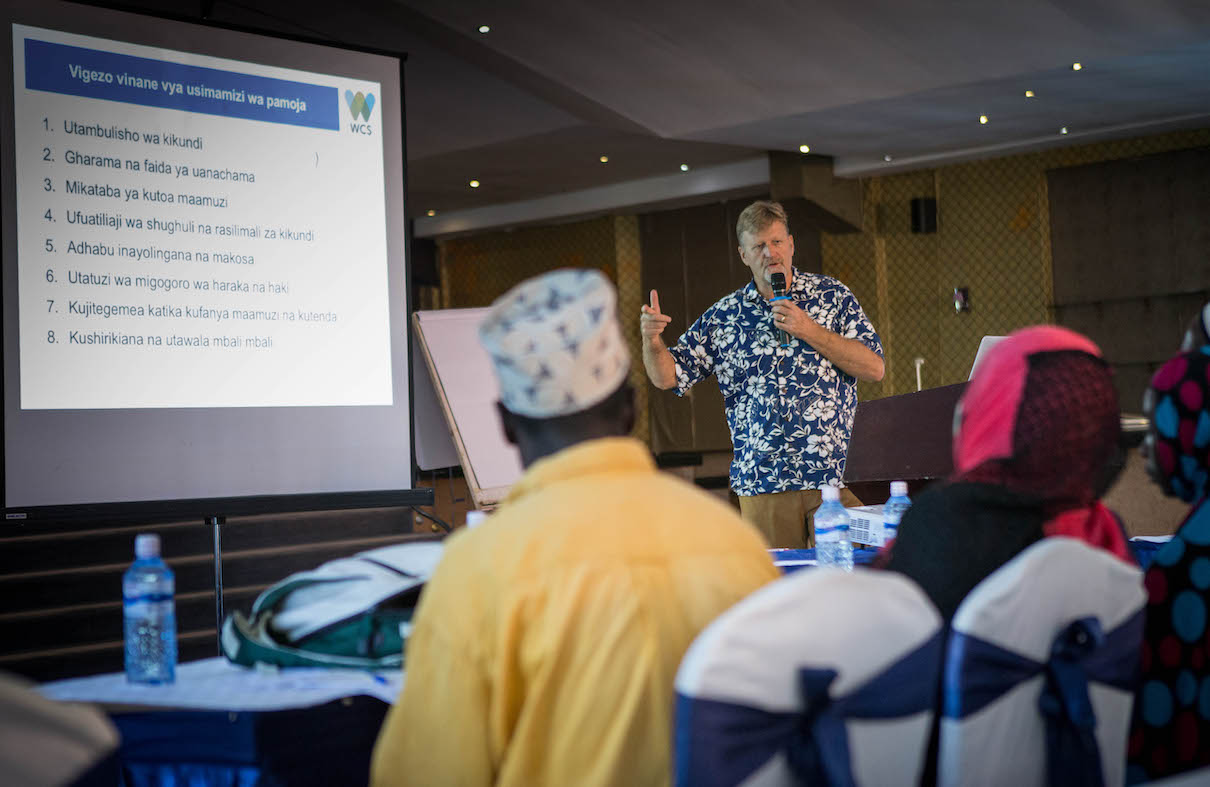 ‘We could have walked away’

In 1994, the fishing community in Kenya’s Kwale county was in turmoil. Officials had proposed and even legally gazetted an MPA along the country’s coastline, but the plan was abandoned as conflicts between fishers and park service employees escalated. Instead, the local government implemented gear restrictions starting in 2001. But in nearby Mombasa county, a 600-hectare (nearly 1,500-acre) MPA had been successfully set up in Mombasa Marine National Park, although this move instigated its share of conflicts as well. From the 1990s onward, Mombasa Marine National Park’s MPA has remained mostly free of fishing activity, the study says.

These two sites became the main focus of McClanahan’s study. He chose them not only because authorities were implementing different protective methods in the two locations, but also because of the uniformity of their fringing coral reefs along the coast, which made it easier to compare sites, he said. Additionally, he said that there is “good compliance” with fishing regulations in Kenya, which helped him collect accurate data.

Between 1995 and 2019, trained observers working with McClanahan monitored catches at various landing sites. They also conducted underwater surveys to assess how many fish had been caught and how many remained in the water. Their surveys included a wide array of species, from rabbitfish to goatfish to octopuses. Then, McClanahan and his assistants analyzed the data to evaluate fishing effort by looking at the catch per unit effort (CPUE), which indirectly measures the number of target species that were caught, and the total annual yields, a measure of the weight of the total catch at each site.

Over the 24-year study period, there was a slight increase in CPUE in both the gear-restricted sites and the closed area, which seemed to indicate that both methods were having a positive effect on the local artisanal fisheries.

“We could have walked away then and said, ‘Okay, well, problem solved,’” McClanahan said. “But … the total yield is really what we’re concerned about for sustainability [purposes].”

A rise in CPUE typically indicates that longtime fishers are hauling in more fish, he said.

“That’s a good thing,” McClanahan added. “But what you forget, what people tend to sweep under the rug a little bit here, is that some people probably left because … they lost areas of fishing ground or the new management system just didn’t work for their particular gear type.”

At the gear-restricted sites, total yields steadily declined to 30% below the author’s predicted estimates of the highest average catch in those areas. Conversely, the total yields from the landing sites adjacent to the MPA remained stable across the 24 years.

“I think what the park does is create the conditions where these [fish] reproductive events actually happen more often, more successfully,” he said. If a species’ numbers drop too low, reproductive encounters become less likely, leading to fewer offspring to replenish the stock, he added. 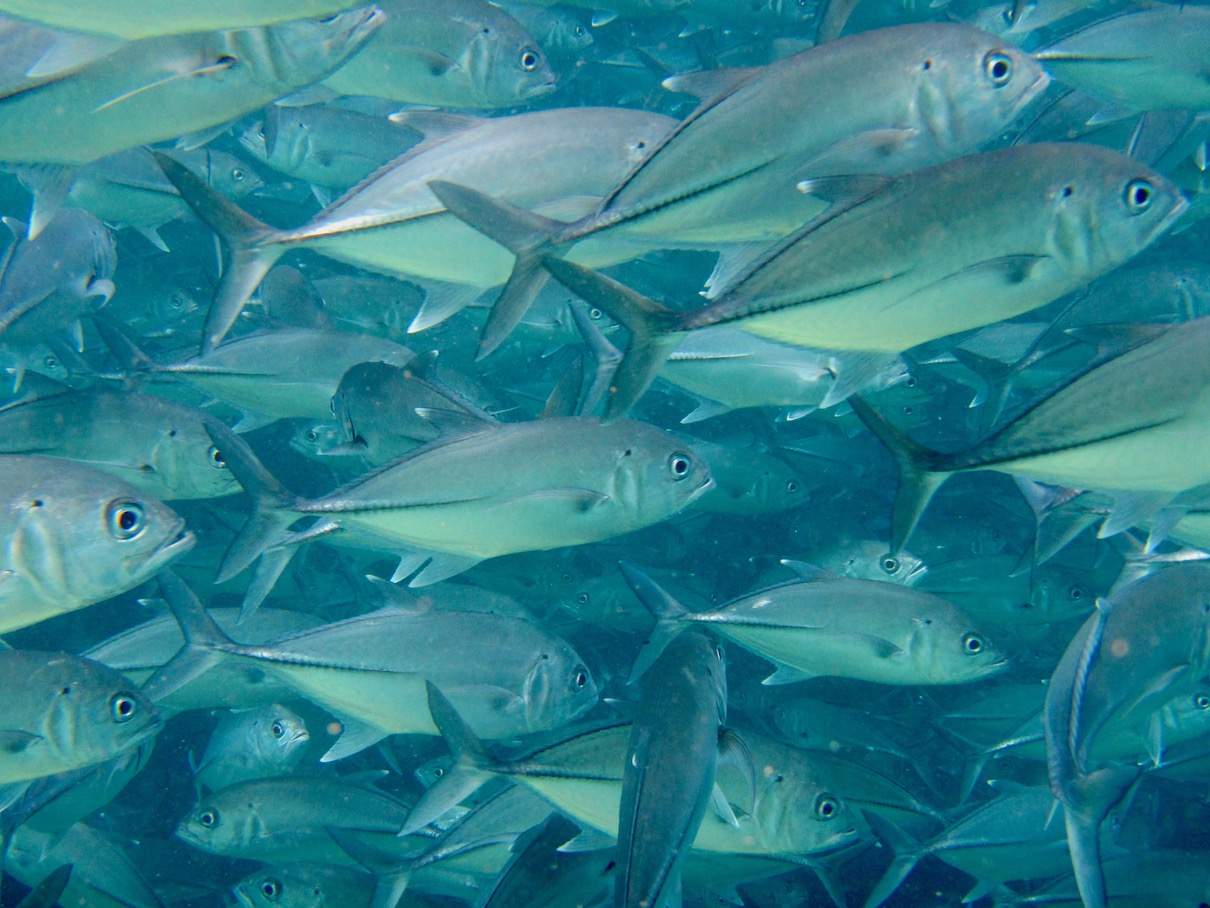 Reef fish off the coast of Kenya. Image by Tim McClanahan.

‘There are often social costs’

While the study’s findings suggest that MPAs are a more sustainable solution than gear-restricted sites, full-closure MPAs may not always be the right choice, said Veronica Relano, a researcher at the international research initiative Sea Around Us, who was not involved in the study.

“We should not think that the establishment of a no-take MPA solves all our problems,” Relano told Mongabay in an email. “On the contrary, poorly planned and managed no-take MPAs can do more harm than good. For example, when they curb small-scale subsistence fisheries. Another problem that may arise is when MPAs are not ecologically representative of an ecosystem, or are designated out of convenience, because an area is not used anyways. Then, they risk being ineffective, which may nurture perceptions that MPAs are useless.”

Christina Hicks, an environmental social scientist who worked on this project with McClanahan in its early stages, says that the study offers an “unparalleled” data set due to its long-term nature and its focus on the tropics, which she says is “notoriously data poor.” She said that she interprets the findings as showing that fisheries management “requires a combination of different approaches.”

“I think it’s probably dangerous to go down the road of either/or when both of them are showing positive effects,” Hicks told Mongabay. “In Kenya, you’ve got this combination of closed areas, but you also have gear restrictions, and I know in the early days [when] the closed areas were put in place, there were clashes and violent clashes. There are often social costs associated with marine protected areas, so I think the gear-based management provides the opportunity to work more collaboratively with local communities and to sustain livelihoods as well as to sustain biomass.”

Ray Hilborn, a professor at the University of Washington’s School of Aquatic Science and Fisheries, who was also not involved in the study, says that similar fisheries in other parts of the world may find that other management techniques are more appropriate, such as size limits or closed seasons.

“The bottom line is that managers should use whatever tools they have available, and it looks like, for those fisheries described in the McClanahan paper, closed areas are the most effective tool,” Hilborn told Mongabay. “But in other places like the U.S., we have much more effective tools that have been shown to work.”

McClanahan himself says that an MPA may not always protect fish and other marine species if it lacks proper management or local support. Still, he says that protecting 30% of the Kenyan coastline could be the key to solving the issue of overfishing in the region, which could in turn help ensure food security for the many people who rely on fish as a primary food source.

“I know that’s pretty idealistic,” he says. “But … if people recognize that, ‘OK, well, this is something we’re going to invest in, we’re going to make sure it happens,’ the willingness would increase and people would adopt.”