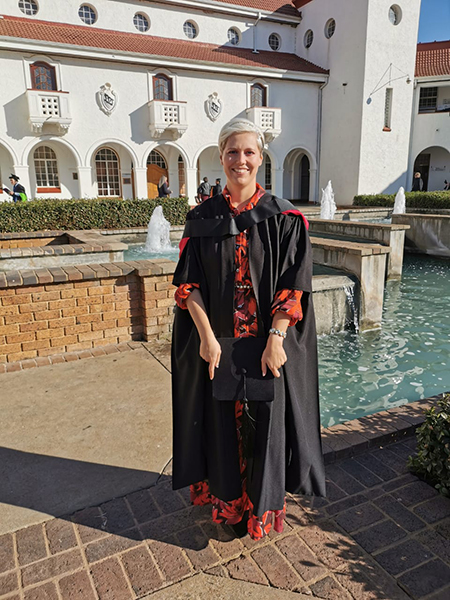 While most people are aware of the health risks associated with children being overweight or obese, they do not know about the academic consequences that come with these conditions.
Deidré van Staden, a North-West University (NWU) master’s degree graduate, conducted a study in which she explored how child obesity, overweight, stunting and wasting affect academic performance in mathematics, language, reading and writing.
Titled “A longitudinal study on the effect of overweight, obesity, stunting and wasting on academic performance of primary school boys: the NW-CHILD study”, it was conducted under the supervision of associate professor Prof Dané Coetzee and lecturer Wilmarié du Plessis from the NWU’s School of Biokinetics, Recreation and Sport Science.
The participants in the study were primary school boys from North West. Deidré followed their performance from 2010, when they were in Grade 1, until 2016, when they were in Grade 7.

Academics are affected
The purpose of this study was twofold. Firstly, it aimed to determine what the effects of being overweight and obese are on academic performance, taking into account socio-economic status (SES). Secondly, it determined what effects stunting and wasting have on academic performance.
The study found that the participants’ body mass index (BMI), stunting and wasting increased from 2010 to 2016. In most of the school subjects, there was a small to large effect relating to the association between BMI and academic performance, except for Afrikaans in 2013.
Over the seven-year period it was found that stunting and wasting had an effect on academic performance, especially when it came to mathematics and language subjects.
Listen to a sound clip of Deidré.
Deidré, who currently owns her own kinderkinetics practice in KwaZulu-Natal, says this study has relevance for the Department of Basic Education, schools, teachers and healthcare professionals.She adds that her research has given rise to the development of intervention programmes for the affected learners.