Culture change in business, much like culture itself, can be difficult to define. It’s a soft concept rather than something tangible and there’s no fixed results to see when culture change has been done successfully or concrete way of defining it and rating its success. This shouldn’t mean though that its importance can be understated and instilling the right kind of business culture is certainly not a luxury that can be taken lightly.

Indeed, a recent survey of 2,220 global business people found 60% believed culture to be more important than strategy or operating model. Though the same survey found only 35% believe the company’s culture is effectively managed. Successfully implementing a change in culture can not only increase revenue and growth through a more engaged workforce it also means your company becomes a more attractive place to work and can therefore pick the best talent available.

South Africa’s public institutions are one area that is in need of turnaround. Eskom’s troubles are well documented with Moody’s citing their major failings as a cause for national concern. The ratings agency labelled South Africa’s SOEs as the biggest and most dangerous economic stumbling blocks facing the country, but singled out Eskom for particular criticism.

Considering the importance placed on culture in the business world and the impact a change in it can have on things as essential as the bottom line, these institutions are well placed to take a serious look at culture change.

The turnaround at SETA

Despite these problems, five years ago Felleng Yende took the decision to leave her executive director position in the private sector and join a public institution when she took up the role of CEO at the Fibre Processing and Manufacturing (FP&M) Sector Education and Training Authority (SETA).

The SETA was not in a good way, Yende revealed to us that the recruiter had tried to convince her to take the position as a way to prove herself at a struggling institution that needed leadership and to be turned around.

Some of the issues the organisation faced at the time included performance levels being at 45% of their targets, financial problems, (some bills didn’t get paid for up to two years when Yende arrived), a breakdown in relationships with businesses and poor time management across the staff.

She prioritised changing the culture in the SETA, starting with appropriate dress, instilling a proper respect for timekeeping and prioritising the organisation’s relationship with businesses.

“I spoke to labour to ensure their needs would also be met within our new model. And from here we created a new culture. We changed the culture of the SETA, and the relationship with business,” said Felleng Yende.

In five years through targeting culture the FP&M SETA has seen results. A one year audit showed performance levels had increased from 49% to 70% and now sit above 90%. A new policy has been introduced to ensure every communication to the SETA is responded to within 72 hours and invoices are now paid within two weeks rather than two years.

Culture Change: The Best and The Worst

Not every attempt at culture change is a roaring success though. A Gallup study in 2006 concluded 70% of organisations that have tried to change their culture have been unsuccessful. Here are a couple that did not have the desired effect, as well as two that did.

1)   Nokia – After leading the mobile phone market at the start of the century Nokia had begun to fall behind competitors like Apple, so in 2010 the company appointed a new CEO and looked to change what was seen as an overly bureaucratic culture.

Having been so dominant early on in the industry the company had got complacent and slow, demonstrated by management shelving rolling out a touchscreen smartphone in 2004 that the company had invented, as it was seen as too costly. One former designer described the culture as “Soviet-style bureaucracy” and “management by committee”. New CEO Stephen Elop blamed a culture of complacency and the organisation needed an overhaul and decision making to be de-centralised. Elop tried to change the culture by delayering management and turn away from bureaucracy.

However just a year after his change Nokia retrenched 4,000 workers, then a further 12,000 the following year, in which time the company had lost $90 billion in market value and in 2013, just three years after Elop’s appointment Nokia was sold to Microsoft.

2)   Clash of cultures at DaimerChrysler – Though this was more a failure to anticipate a clashing of different work cultures when a merger takes place, and therefore not appreciating its importance, we feel it’s still a lesson worth heeding. In the 1990s two true automobile titans Germany’s Daimler and US Chrysler, merged and it was billed as a “merger of equals”. It soon became apparent that the companies had very different cultures on issues such as formality, pay, expenses and operating style.

The German company’s culture soon became dominant that employment satisfaction at Chrysler plummeted. “How do you pronounce DaimlerChrysler?… ‘Daimler’—the ‘Chrysler’ is silent,” was apparently a joke doing the rounds among dissatisfied Chrysler employees at the time. With big losses anticipated retrenchments began in 2001 and in 2007 Daimler sold Chrysler for $6 billion.

1)      Microsoft – In 2014 Microsoft had become somewhat stale and seemed to be lagging behind Apple in the technology game. That year they appointed Satya Nadella as CEO and as well as making some key directional decisions he also brought about a change in culture that had remained the same since Bill Gates and had stagnated. As he hadn’t been in the company since it started, joining in the 1990s, he was able to see how the culture was in need of changing.

Nadella realised that the company was very much in conflict with itself, big departments within Microsoft saw each other more as competitors than partners in the same company with the same goals. This toxic environment had led to a stifling of innovation and a reliance of refreshes of Windows. He restructured the company to get rid of this internal competition between different groups and have everyone working towards the same goals to try and reengage the workforce. This opening up extended to the products and Office can now be used on all devices. It was a change that required a change and opening up within Microsoft to be able to happen and it has shown results. Revenue for Office 365 was up 70% in the second quarter of 2016.

2)   Comair – Culture change doesn’t have to be instigated by a new CEO deciding there’s something wrong with how the company operates. In 2010 Comair underwent a strategic review of its business, in order to streamline its operations, as it had grown and developed organically and so naturally was a slight jumble of different systems. As part of this they appointed a Programme Delivery Executive whose team observed a sense of change fatigue with the employees, as the company had undergone many changes before this.

The team engaged staff and management to develop leadership that was engaging with the staff so they were fully involved. Also so they understood why this change to one system was so crucial and so that it wasn’t seen as just another change imposed from above on experienced staff members who had been there for a while and were now being ignored in the direction of the company. 1172 staff needed training on the new system and it wouldn’t have succeeded if they hadn’t been involved in the process. Since 2010 Comair has more than doubled its annual revenue from R3 billion to R6.5 billion.

What now for SETAs & South Africa?

Yende is clear about the reasons she wanted to make the transition from private to public sector and take on all the added challenges that involves.

“I do also feel I am proudly South African and this is a tremendous opportunity to serve my country,” she said.

But it is not just a case of a patriot deciding to stick their head on the line and embrace a public institution. There is wider support and there is a genuine sense from Yende that together South Africa can change the image and culture of some of its government institutions and she looks no further than the President as an example of bringing together different skills and experience from various areas of society to work towards a better South Africa.

“The importance of collaboration. No individual person or leader has ever succeeded without having partners who share a similar vision. No amount of power or economic muscle will change that. If we look at what the Honourable President Cyril Ramaphosa is doing, he is using his combined experience from working in labour, in business, and in government to show that he believes in collaboration and in coming together to work as a team,” she added. 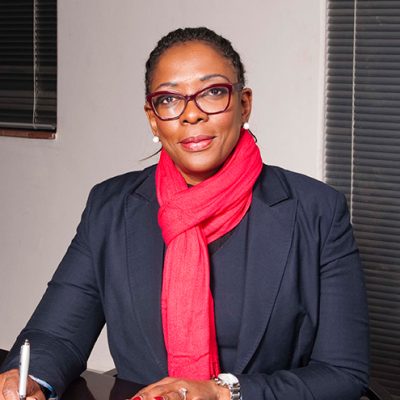