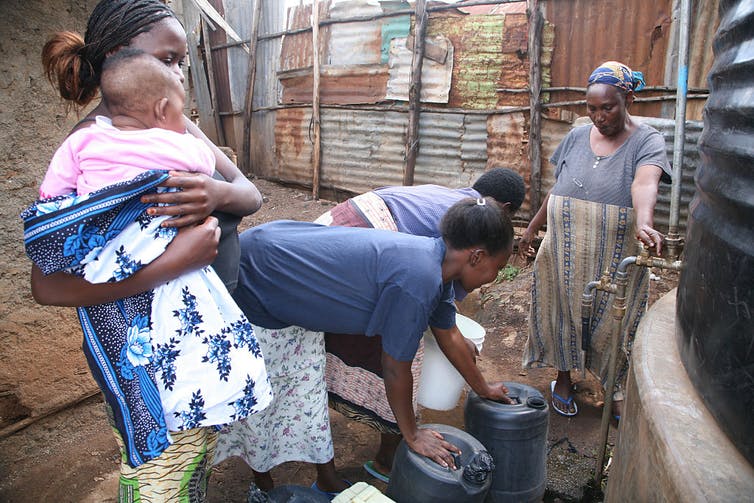 Many African cities struggle to supply safe, potable water to their residents. One of the main reasons for this is urbanisation; cities’ populations grow rapidly as more people move to them from rural areas.

Another reason, in some regions, is water scarcity.

Researchers have long suspected that informal urban neighbourhoods are lagging behind their formal counterparts when it comes to accessing safe drinking water. But this reality can be obscured when data is aggregated to city scale rather than being examined at a granular, localised level.

Numerous studies have been conducted to examine inequalities in safe water access. Most measure this access through source type, such as access to tap water. Some have incorporated other dimensions of water service delivery, notably water quality. However, relatively few studies have examined intra-urban differences in the volumes of water consumed.

In our study in the Kenyan capital, Nairobi, we examined patterns of domestic piped water distribution between 1985 and 2018. We used data from Nairobi’s water and sewerage utility using small areas they call “itineraries”. These have an average population of 700. We also examined granular population data from the WorldPop mapping initiative and we drew on spatial data about the age of different neighbourhoods for the years between 1975 and 2014 from the Global Human Settlement project.

This data allowed us to examine differences between neighbourhoods in sufficient domestic water consumption, cost, and water access. Crucially, we could examine changes over time. The data revealed that newly developed low-income urban neighbourhoods – home to up to a third of Nairobi’s population – are not as well serviced as older, wealthier and less densely populated areas.

Our hope is that these findings may influence governance and policy in the water sector. Water supply must be reliable, safe and affordable to everyone who lives in Nairobi.

The data showed that water sufficiency in Nairobi differs according to several factors. These include the age of a neighbourhood, income level, type of water access and the size of the population per itinerary.

The manner in which people access water differs according to income, too. People in high- and middle- income areas tend to have piped connections in their homes. Those in middle to low and low-income areas were more often getting water from communal taps or water kiosks (water vendors who sell water purchased from the utility company).

We also found that a great deal of water – an average of 3.5 billion litres per month – is being wasted either through burst pipes, theft or irregular meters. This is more than twice the amount of water needed for every one of the city’s residents, across all areas, to access the recommended 1500 litres a month.

There are three ways to address the spatial inequality of water access in Nairobi: good data to plan water services and tariffs, investing in infrastructure, and governance.

Data on water supply and consumption is key in assessing the gaps in the water distribution process. It can also help to ensure better management of sometimes scarce or limited water supplies. Historically, government data has been poorly stored.

However, there have been positive improvements in this regard as governments increasingly ensure that their data is accessible, electronically stored, complete and consistent. This enables research and future planning. Kenya has digitised the water consumption data and made the water tariff structure publicly available.

Improving water sufficiency will also require the right investments from the government. Growth in city population should be accompanied by investments in infrastructure to support provision of safe water to the population – including proper funding of water utility companies to enhance their performance. Investments should be organised based on residential category and neighbourhood age, with a focus on the groups the data shows are not being well serviced.

Finally, good governance is required to minimise both water losses and social inequalities. There should be a deliberate prioritisation of water supply and infrastructure development in low-income areas, both in newer and older neighbourhoods, and in densely populated areas. This is critical if Kenya is to achieve the water access targets outlined in the African Union’s Agenda 2063 and the 2030 United Nations’ Sustainable Development Goals.