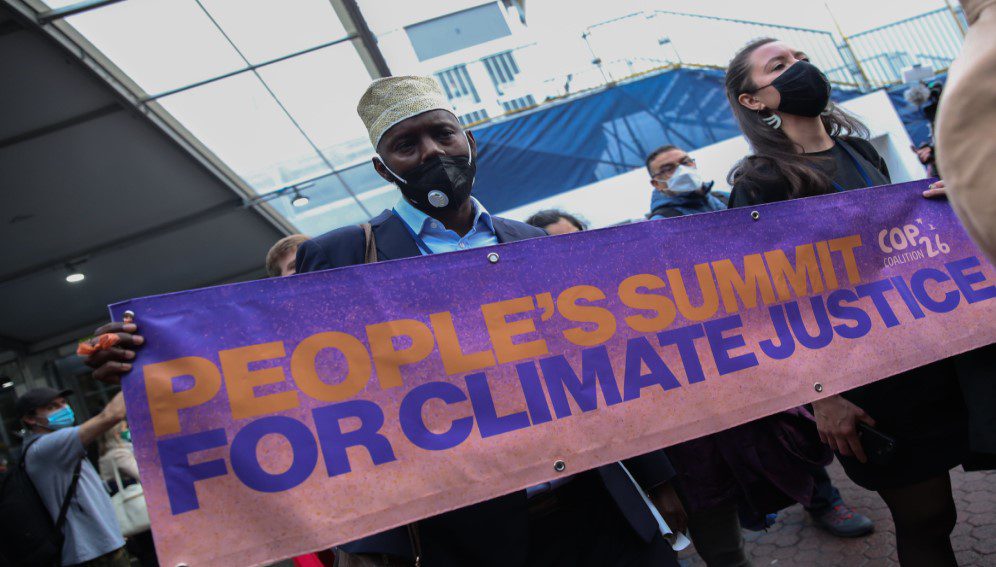 Activists from Sub-Saharan Africa have decried the lack of adequate action to tackle climate change in one of the regions of the world most vulnerable to its impacts at a UN summit they say is dominated by wealthy nations.

As world leaders and delegates draw close to the end of the COP26 climate summit in Glasgow, Scotland, activists say the UN conference has made communities from the global South “invisible”.

COVID-19 related restrictions, vaccine inequalities, tight UK immigration rules and accommodation struggles in the host city have left representatives from Africa out in the cold, they said.

For some climate change activists in Sub-Saharan Africa, the anticipated challenges of travelling to COP26 and frustrations with previous climate negotiations put them off from trying to attend the conference altogether.

“What we want from the negotiations this week is action. We do not want commitments on top of commitments.”

“I made a decision sometime back not to be attending these conferences. In my time championing the cause of Africa, I listened to just enough grandiose speeches, full of jargon but ultimately inadequate in bringing real impact on the ground,” said Herbert Mwalukomo, a Malawian activist and former Africa region facilitator for Southern Voices on Climate Change.

Mwalukomo, the head of the Centre for Environmental Policy and Advocacy, said he has been observing conference in Glasgow and he is not impressed.

“Where is the US$100 billion climate finance per year that was committed years back? What are those polluters doing in their territories to stem global warming? We don’t have much time,” added Mwalukomo.

“Global warming is not waiting for speeches. I know some will think this week could produce something impressive but many stakeholders that matter are excluded.”

COP26 aims to fast-track action towards the attainment of goals as set in the 2015 Paris Agreement and the UN Framework Convention on Climate Change.

But George Mwangala, associate campaign director for Africa at the Purpose Climate Lab, said that Africans have been locked out of the conference both in terms of leaving the continent and, for most of those that have travelled, being reduced to the fringes of conference halls.

He said that he made a personal choice not to travel to Glasgow because he knew he would only have been an observer there anyway.

With the conference ending today, Mwangala challenged negotiators that the time for more commitments was over.

“What we want from the negotiations this week is action. We do not want commitments on top of commitments. We have had enough of this. We want action. What is critical to us is climate finance,” Mwangala explained.

Maggie Mapondera, communications and media coordinator for WoMin African Alliance, an ecofeminist alliance for climate justice, said there were clear issues with the exclusion from COP26 of those most heavily impacted by the climate crisis.

She said the conference had excluded communities from the global South, “as well as some of those who are there being made invisible or being silenced as though their stories do not matter”.

On her impression of the proceedings at the conference, Mapondera too is unconvinced.

“Broadly, it’s clear that the conference is largely a greenwashing exercise with many of the governments failing to make real commitments to limit greenhouse emissions and put forward real solutions to the crisis as well as concrete proposals for climate adaptation and mitigation for communities that are already suffering greatly,” she said.

In the run up to the summit, the African Group of Negotiators on Climate Change outlined Africa’s priorities at COP26, including adaptation, climate finance and rich nations – which account for 80 per cent of greenhouse gas emissions – meeting their 2009 mitigation commitments.

On Monday, the UK pledged £290 million in new funding from its foreign aid budget to support poor countries in their efforts to cope with the impact of climate change.