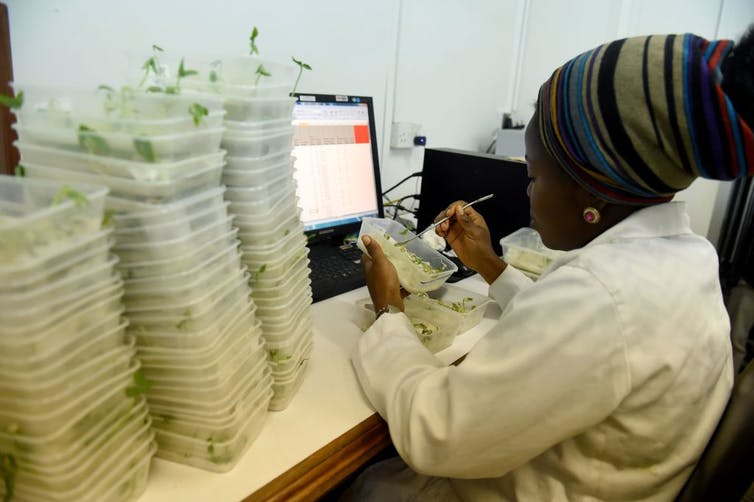 “Fresh impetus is being directed into identifying and advocating for scientific priorities in the area of food security and nutrition across Africa, with a particular focus on health implications.

At the centre of these efforts is a a five-year project initiated by the Alliance for Accelerating Excellence in Africa, a partnership between the African Academy of Sciences and the African Union Development Agency-NEPAD. This project aims to identify the continent’s most urgent research and development questions, and to advocate for investments in these areas. This will go a long way in helping the continent achieve its vision of transforming lives through science.”

Fresh impetus is being directed into identifying and advocating for scientific priorities in the area of food security and nutrition across Africa, with a particular focus on health implications.

At the centre of these efforts is a a five-year project initiated by the Alliance for Accelerating Excellence in Africa, a partnership between the African Academy of Sciences and the African Union Development Agency-NEPAD. This project aims to identify the continent’s most urgent research and development questions, and to advocate for investments in these areas. This will go a long way in helping the continent achieve its vision of transforming lives through science.

As a professor of pharmacology and having worked in the field of African indigenous medical knowledge for decades, I have been involved in research in this field, and have been a strong advocate for more research. I also believe the translation of this research into policy is critical.

One of the things that has become clear to me is that, while Africa is rich in biological diversity, this reality simply isn’t being used to its full potential. This was emphasised at a consultative round table last year on food security and nutrition priorities for Africa organised as part of the five-year project.

A survey was designed for this round table to prioritise research and development questions relating to food security and nutrition. This survey attracted comments and engagement from more than 1,000 experts globally.

The experts made it clear that what is needed is a prioritisation of the health and medicinal values of the food that’s consumed in African countries. In turn, this will spur more research and development of new supplements and phytomedicines – that is, plant-based therapies and medicines – across the continent. This approach has been successful elsewhere, most notably in China. The Asian country has invested heavily in training young practitioners of Chinese traditional medicine, who work with, among other things, plant-based therapies and phytomedicines. The Chinese government has also spent a great deal on manufacturing phytomedicines.

Changes in traditional eating patterns have brought about new health threats on the continent, including an increase in non-communicable diseases. Dietary interventions are also crucial in tackling type 2 diabetes and cardiovascular disease. In many cases, diet can reverse type 2 diabetes. And food is a key component in fighting marasmus and kwashiorkor, both severe forms of malnutrition.

Those of us who grew up in villages are used to consuming edible insects at their appropriate seasons. The younger generation generally abhors consumption of edible insects. Yet, recent scientific evidence has shown that edible insects are rich in nutrients, which promotes better health.

Read more:
How insects can help fight hunger in the world


There are solutions. One is greater diversification of rural cropping systems. In Malawi, Mozambique and Zambia, crop diversification combines the planting of maize; legumes such as beans, soybeans, pigeon peas, groundnuts and green beans, non-maize staples such as cassava, sweet potato, rice, millet and sorghum; and cash crops, such as cotton, tobacco, sunflower, cashews and sugar cane. In this way, farmers can spread the risk of crop failure and productivity loss due to weather events.

Studies have shown that some neglected and underutilised crops are adapted to a range of agro-ecologies. They are dense in nutrients and also offer better prospects in areas where crops don’t often grow well. Such crops, among them finger millet, bambara nut and cassava, are often drought and heat stress tolerant, resistant to pests and diseases, and adapted to semi-arid and arid environments.

Read more:
Eating insects has long made sense in Africa. The world must catch up


The nutrient density of these crops, as well as algae and edible insects, can be used to diversify diets and to address micro-nutrient deficiencies in poor rural communities.

Promoting these foods in rural areas could also create opportunities for rural economic development through the development of new value chains. China, Malaysia, India and Vietnam are good examples of countries that derive socio-economic benefits from investment in their traditional food and medical practices.

One of the priorities emerging from our work at the Academy involves commercialising the production of indigenous foods. This will mean, among other things, pushing for governments to invest in researching the safety and efficacy of foods as medicine, as well as advocating for basic sciences research on indigenous crops.

More investment in research of neglected and underutilised species could also yield new food products that will enhance people’s health and nutrition across Africa.

We also hope to promote the development of germplasm of nutrient-dense indigenous crops and underutilised species. Germplasm are living genetic resources like seeds and tissues, stored at low temperatures so they can be researched, preserved or bred.


All this work rests on a central premise: it’s long past time for Africa to embrace the concept of good food as good medicine.

Dr Grace Mwaura, former manager of the African Scientific Priorities Programme at AAS/AESA, Deborah-Fay Ndlovu, communications manager and Gladys Akinyi, an intern, offered support in the writing of this article.

UCT's Prof Ed Rybicki: "It typically takes seven to 15 years to develop a vaccine from scratch for development and testing."