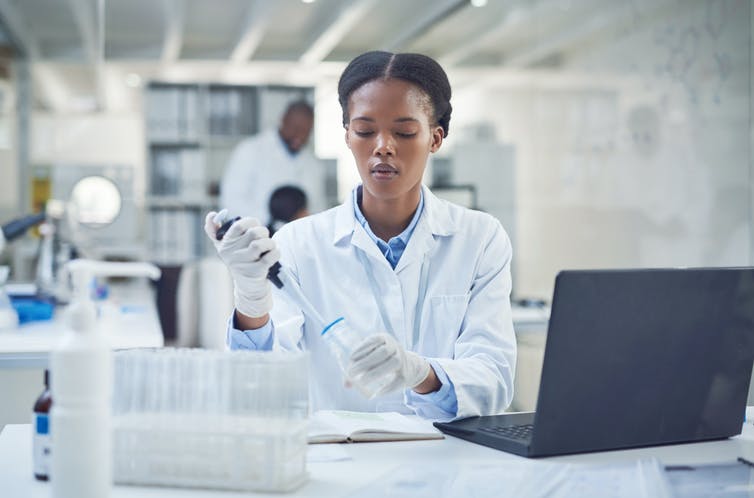 In a recent open letter to international funders for research and development, we highlighted multiple power imbalances and appealed to the funders to help build a more equitable ecosystem.

In this second letter, we urgently call on our own African political and research leaders to take greater responsibility to streamline research programmes and funding. We emphasise that responsibility for addressing the current gaps in research and development lies with the international community – as well as with African governments and their institutions.

In a recent open letter to international funders for research and development, we highlighted multiple power imbalances and appealed to the funders to help build a more equitable ecosystem.

In this second letter, we urgently call on our own African political and research leaders to take greater responsibility to streamline research programmes and funding. We emphasise that responsibility for addressing the current gaps in research and development lies with the international community – as well as with African governments and their institutions.

Research and development capacity has increased in recent years. Nevertheless only a handful of countries are close to the 1% target. Kenya, South Africa and Egypt have emerged as major research hubs in the last decade. Kenya invests about 0.8%, South Africa 0.75% and Egypt 0.6% of their GDP.

The ongoing COVID-19 pandemic has underlined the dangers of this approach even more. Africa has 14% of the world’s population but produces only 0.1% of the world’s vaccines. To date, one in four people in high-income countries have been vaccinated, compared to one in 500 people in low-income countries, many in Africa. Throughout the pandemic, African countries have been at the back of the queue for getting adequate test kits and consumables, personal protective equipment and now vaccines.

African countries are therefore dependent on the globally funded COVAX initiative to secure vaccines. The dependency on Western vaccine development and manufacturing has resulted in limited stocks and multiple bottlenecks. As a result many African countries may not attain the desired herd immunity against COVID-19 until 2023.

Nonetheless, this crisis has also presented an excellent opportunity for African governments to support research capacity. The danger that the COVID-19 pandemic poses to countries on the continent – and the ongoing vaccine nationalism – is a timely wake-up call. The African Union and its development agency – New Partnership for Africa’s Development – should prioritise working with governments to meet their promises on funding for research and development.

The pandemic is a brutal reminder that African governments need to muscle up their support for research capacity, especially for infectious diseases and vaccine research.

There is also a glaring lack of leadership and direction by and from African research and political leaders. The result is evidenced in the chronic lack of government investment – and regard – for science in our countries. As a result, African scientists who have the capacity to identify, sequence and track viruses have missed out, even during a pandemic, in developing life-saving treatments and vaccines.

Beyond COVID-19, the absence of investment spans infectious diseases research, the greatest burden of which is in Africa.

Africa’s overreliance on international funding and the impact of underlying biases have contributed to the under-representation of Africans in both local and international research and development scenes.

The impact of this overreliance has recently become all too clear. The UK government announced that UK Research and Innovation, the UK public body that directs research and innovation funding, had confirmed cuts to the overseas aid budget from 0.7% of GDP to 0.5%. The result has been a £120 million fall in overseas research programmes managed by the institution in 2021-22.

The decision, which includes immediate cuts to ongoing work, has affected African scientists the most. For example, the £1.5 billion Global Challenges Research Fund supports cutting edge research collaborations between UK scientists and researchers in various low and middle income countries. South Africa, Kenya and Uganda hold most of the grants for health, climate and sustainable development issues.

These investments are now at risk of incompletion. Scientists from the global north might have numerous alternative funding sources including national research funding programmes. But this isn’t the case for African scientists. Most rely on external donor agencies for research grants and fellowships.

The current research funding landscape in Africa is untenable.

What needs to be done

It is time for African governments to strengthen national research programmes and partnerships. They need to do this by working with the local scientists to prioritise domestic programmes for targeted research funding.

It is also critical that we focus on building a new future and lobbying for more South-South partnerships and initiatives focusing on the African bloc. African research and development capacity cannot continue to rely on funding structures that can be withdrawn on a whim, leaving African researchers helpless.

COVID-19 has been a stark reminder that most countries are likely to default to nationalistic policies during a crisis. This can further exacerbate global inequities when nations are faced with a singular threat. African countries therefore need to:

Africa too must rise and take greater responsibility to streamline research programmes and funding. Ultimately, the responsibility of addressing the current gaps lies with Africans and their institutions. Not with the international community.

How To Raise Larvae On Food Scraps To Feed Livestock