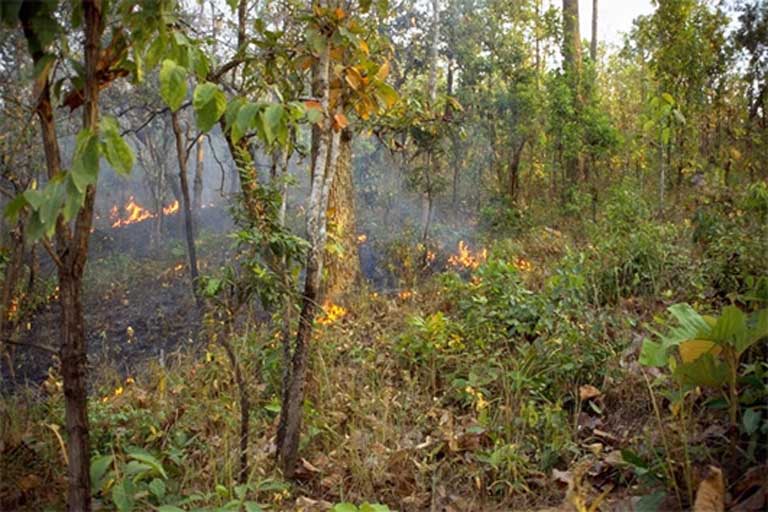 The assumption has long been that deforestation — easily and accurately measured from satellites — poses the greatest threat to the billions of tons of carbon stored in the biomass of the Brazilian Amazon. But forest degradation due to environmental and human disturbance is responsible for the bulk of that carbon loss, according to researchers at the University of Oklahoma. In fact, degradation — the loss of forest quality — released three times as much carbon as deforestation between 2010 and 2019, they say.

“We’re excited that we can analyze the forest area, forest cover change and the biomass change,” says Yuanwei Qin, a researcher in the University of Oklahoma’s Center for Earth Observation and Modeling and the lead author on the study. “But after we saw the results, we have some concern about forest conservation in the Brazilian Amazon…. We need to do something to increase the carbon sink in the forest to help mitigate climate change.”

This study is part of a growing body of research that emphasizes the importance of forest degradation in the Amazon. “Their work is important and new and pushing the science in an important new direction,” says David Skole, a professor in the Department of Forestry at Michigan State University who was not involved in the study. “Bringing degradation into the discussion is so important.”

Deforestation is defined as the total removal of trees, which in the Amazon is mostly carried out to facilitate ranching or to grow crops, and historically observable from satellite. Forest degradation is a more subtle process, and in the past harder to measure and monitor, though far more widespread.

Degradation is a loss in the quality and health of the forest, the result of environmental influences (such as drought, storms and intensifying heat) or human influences (such as fragmentation due to illegal logging to remove high-value trees, or from fires, which in the Brazilian Amazon are mostly set by people to make land more valuable and usable).

Although humans clear huge swathes of forest every year, this deforested area still represents only a small fraction of the Brazilian Amazon. However, human and environmental degradation can touch vast regions, leading to massive biomass loss and carbon release even in areas where trees still stand. “You might even walk through it and say, ‘Wow, this is a tropical forest,’” Skole says. “But it could be heavily degraded by human activities.”

To compare the effects of forest degradation and deforestation on carbon loss, the research team led by Qin used annual maps of aboveground vegetation depth as a proxy for carbon storage. They also used radar imaging to measure forest coverage, as they reported in Nature Climate Change last year and presented at December’s American Geophysical Union meeting.

The scientists charted the relationship between forest area and aboveground biomass from 2010 to 2019. “We found that yes, deforestation did contribute to the biomass loss,” Qin says. But the mathematical relationship wasn’t perfect — areas without any deforestation were still losing biomass. “So the [lost] forest area alone couldn’t explain the [total] biomass loss.”

In 2019, for example, the Brazilian Amazon lost 39,000 square kilometers of forest area, but in 2015, just 30,000 square kilometers was lost. “However, the net AGB [aboveground biomass] loss was three times smaller in 2019 than in 2015,” notes the study. The team believes that a strong El Niño, causing extreme drought and storms, likely contributed to heavy forest degradation and biomass loss in 2015.

Drought is a key driver of carbon loss from forest degradation, say the researchers. Their analysis shows that biomass losses grew as annual precipitation levels fell. “Under water stress, the trees don’t grow, or they lose their leaves for years,” says Xiangming Xiao, director of the University of Oklahoma’s Center for Earth Observation and Modeling and a study author. That means less vegetative material in which carbon can be stored. Those drought effects can persist for years. While drought can be a natural environmental impact, human-caused climate change and “the burning of forests to clear land for agriculture and grazing” have significantly intensified drought in the Brazilian Amazon in recent years, according to a 2019 NASA study.

The researchers hope to further define the relationship between drought, forest degradation and carbon loss in future studies, Xiao says. An important question: Precisely how much are human activities contributing to biomass and carbon loss in degraded Amazon forests (including set fires, illegal logging, fragmentation, and tree death due to climate change-driven drought).

Qin and his colleagues suggest that their methodology for measuring changes in forest area, with its ability to penetrate clouds, smoke from fires and other atmospheric masking, provides a more accurate estimate of forest cover than other currently available methods. Skole, however, suggests this comes at the cost of spatial resolution.

The current study doesn’t differentiate between degradation caused by environmental factors such as El Niño and human factors such as selective logging. “That creates a problem for policymakers who want to put in place actions and measures… to reduce deforestation and degradation by human actions,” Skole says.

In Brazil and globally, such policies include REDD+, a United Nations initiative that encourages forest sector activities to keep trees uncut and carbon sequestered. Wider international efforts, initiated to reduce global carbon emissions and curb climate change under the Paris Agreement, along with other initiatives, could also help reduce degradation due to intensifying drought.

“Degradation has become really important,” Skole says. “It’s hard to measure, it’s hard to quantify, and it’s not usually addressed by policy.” While policies may not be able to affect El Niño patterns, it’s hoped the current study will spur more investigations into forest degradation.

“In remote forest areas, I think it’s natural variability,” Qin says. But policies to mitigate human-driven climate change may be able to stem the effects of Amazon drought, while better forest management could preserve Amazon biomass. “Our study supports policies that reduce some types of forest degradation, like selective logging and forest fires.”

January Deforestation In the Amazon Highest In 14 Years