Are Small Farms the Solution to Food Insecurity? Uganda Study Shows Policies Can Get It Wrong 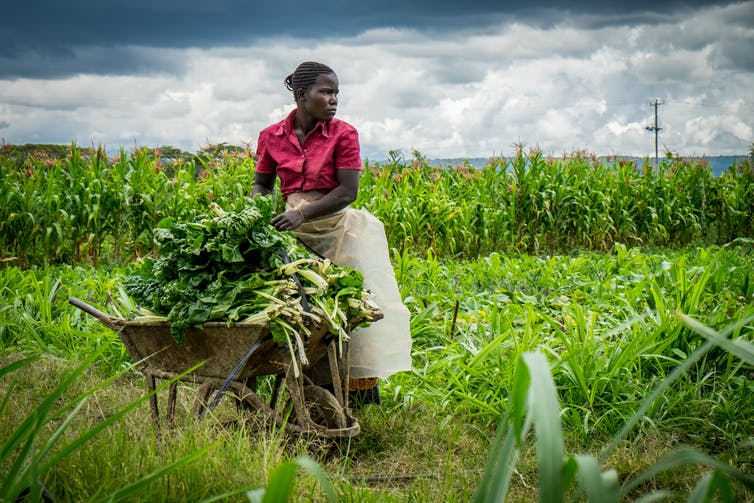 Around the developing world, agriculture remains a critical source of livelihood. In many low-income countries, the sector accounts for around 30% of gross domestic product, and 60% of employment. At the same time, most of the world’s extreme poor live in rural areas, mainly practising small-scale farming.

In trying to understand how to improve the sector, much of the academic research has focused on relationship between productivity and farm size. Specifically, it has long appeared that bigger farms have lower output per unit of land, or yields, than smaller farms.

This was first noted by the economist Alexander Chayanov in the 1920s Soviet Union. It was later documented by Amartya Sen, in the 1960s, for India. The observation was subsequently replicated around the world.

The interpretation given to this inverse relationship between farm size and yields, is that policies that favour small land holdings, such as land redistribution and ceilings on the amount of land a farmer can hold, should boost agricultural output and reduce rural poverty. For example, the Africa Union expressly recognises the “strategic role of smallholder farmers in achieving food security, poverty reduction and economic growth”.

Our research, however, challenges the interpretation that small farms are more productive. This is because yields are not only determined by farm productivity but also by other features of the economic environment.

We show evidence that suggests that functioning land markets, backed by strong property rights, would be more effective at improving agricultural productivity than some other popular land reform policies.

Our findings come from four waves of survey data on more than 4,000 farming households in Uganda. The data covers the period between 2009 and 2014. We found that larger farms were, on average, more productive than smaller ones, even if their yields were lower.

To understand why this can happen, we distinguish between two measures of productivity. The first measure is what we call “farm productivity” or total factor productivity, namely how good a farmer is at producing with a given set of inputs like land, labour or tools.

The second measure, commonly used in the literature, is “yields”, or production per unit area of cultivated land. Yield is a partial measure of productivity. It can increase if the farmer becomes better at producing. But it can also change if the farmer adds more inputs to a plot of land.

The rich data for household farms in Uganda allowed us to measure agricultural output. We also had details on all the inputs used in production, including the area of land cultivated, and the number of person-days used on the farm. In addition, we took into account agricultural practices such as use of fertilisers, inter-cropping, soil characteristics, temperature and water.

Using all this information, we were able to estimate both total factor productivity and yields at the farm level. We found that yields were indeed higher for smaller farms, as in previous studies. However, farm productivity was higher for larger farms.

How can we explain this finding? If small farm owners have less access to land markets, due to say, more insecure property rights, this may affect their input choices. For instance, farmers could resort to using relatively more labour in production. In addition, the farming technology is such that an increase in all inputs leads to a less than proportional increase in output.

These features of small-scale farming imply that two farmers may be equally good at running a farm, but the smaller farms may end up with higher yields.

Our research provides evidence that both channels explain the divergence between farm size and both measures of productivity. For example, we found that the positive relationship between size and total farm productivity is strong for households that own their farms and weak for those relying on customary land rights.

Furthermore, our study shows that both measures of productivity vary significantly between farms that use similar amounts of land. This implies that farm size cannot be an effective instrument for policies aiming to address low agricultural productivity.

Our results suggest that policies targeting farm size are misplaced, and can be counterproductive. There is no silver bullet for improving food security and reducing rural poverty. An effective policy should seek to facilitate resources allocation towards more productive farmers.

Yet, the problem for the policymaker is that productivity is difficult to observe. For that reason, we propose that policy should focus on fostering and improving markets. In particular, markets for land need to be developed further. Policies on land ownership and user rights may be an important step toward strengthening markets.

A fair distribution of land property rights, which may satisfy cultural and political objectives, can coexist with functioning rental markets. That would make it possible to separate between ownership and use of land, thus facilitating a better allocation of productive resources.

Disconnecting land use from land rights can also have substantial effects on other economic choices of farmers. Decisions like migration, sector of occupation, mechanisation or technology adoption may further contribute to overall productivity growth.