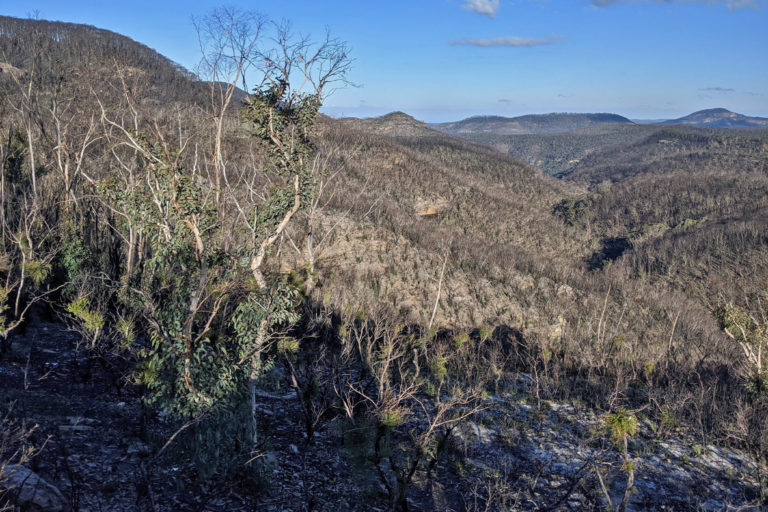 Now dubbed the “Black Summer,” many of these blazes were vast. One, the Gospers Mountain fire west of Sydney, burned more than 510,000 hectares (1.26 million acres), the largest forest fire ever recorded in Australia.

The full scope of damage nationwide wasn’t known until late in 2021, when a study published in Nature Communications calculated the total area burned during the Black Summer at 24 million hectares (59 million acres), an area roughly equal to the terrestrial U.K. The study also confirmed that these wildfires fit a climate change-driven trend of larger fires and worsening fire weather characterized by hotter, drier and windier conditions. Forecasts indicate that trend will only worsen.

With the catastrophic fires still fresh in the collective memory, Australians are now embarking on multiple reforestation initiatives. The federal government has committed A$200 million ($144 million) to aid native wildlife and habitat recovery.

But many tough questions are being asked how this can best be done, and whether or not certain native plant species can adapt to withstand the frequency and ferocity of future bushfires equivalent to or worse than the Black Summer.

Land managers are expressing serious concerns as to whether conventional replanting methods will be effective, and are discussing and testing alternative reforestation proposals. These include the selection of genetically superior seeds and a land management vision encouraging more fire-resistant novel ecosystems, native forests and plantations.

“There is increasing recognition amongst practitioners and the restoration industry that traditional tree planting may not be adequate under a rapidly changing climate, [and] that we need to modify how we plan and implement tree planting to account for the impacts of a changing climate,” said Alistair Jones, Asia Pacific projects manager for One Tree Planted, an NGO.

Southeast Australia was once occupied by rainforest, but as drought deepened over many centuries, its forests became dominated by eucalyptus. Locally known as gum trees, eucalyptus evolved strong resilience to nutrient-poor soil, drought and fire.

But as 21st-century global warming intensifies, these and other fire-resistant trees are finding it increasingly difficult to endure. In 2019-20, the Black Summer fires raged through Australia’s eucalyptus forests, doing major damage.

“With changes in fire frequency and fire severity — coupled with drought stress — we [now] need to question how resilient [Australia’s native] forests are, including the re-sprouters. We don’t really understand how much fire they can cope with,” said Rachael Nolan, lecturer in fire ecology and biogeosciences at the University of Western Sydney.

Significantly, the 2019-20 fires weren’t restricted to fire-adapted eucalyptus forests; they also burned fiercely in subtropical rainforest on the NSW and Queensland border, an ecosystem not adapted to fire and unlikely to rebound fully or quickly. The Black Summer blazes, for example, impacted 54% of the Gondwana Rainforests, a World Heritage-listed ecosystem that has been around for millions of years.

“There is no best practice for forest recovery [here and elsewhere]; it is new ground,” Nolan said. “The focus is currently on monitoring the burnt areas. In terms of what to do next, we’re still trying to get a handle on what has happened and what will happen.”

Mountain ash (Eucalyptus regnens), the world’s tallest flowering plant, is a fire-sensitive obligate seeder, meaning the trees are killed by fire and cannot resprout; instead, they reproduce after a fire’s heat stimulates their fruits to release seed. Those seeds take up to 20 years to mature into trees that can produce more seed. This regeneration process evolved to occur with fire intervals of 100 to 200 years and worked well for millennia.

However, that adaptation strategy is no longer working: Some mountain ash forests have burned up to five times over the past two decades as drought deepened. Concerned about this burning trend, officials launched the largest restoration initiative in Victoria state’s history starting in 2003 to conserve the mountain ash ecosystem — critical to Australia for carbon sequestration and as timber. This involved aerial seeding and hand planting, and ground-based fuel load management.

NSW land managers are considering a similar post-Black Summer reseeding effort for Kosciuszko National Park in the Australian Alps. To prepare, they’ve collected 10,000 alpine ash seeds in NSW to ensure a broad genetic range. Other vulnerable Victorian Alps tree species, including the snow gum (Eucalyptus pauciflora), have been exposed to short-interval bushfires, and could benefit from similar intervention efforts.

But the Black Summer — along with increased fire frequency and intensification — have raised big questions about whether replanting alone is a viable strategy for mountain and alpine ash restoration. Scientists and government agencies, including the Australian Department of Agriculture, Water and the Environment (DAWE), are investigating whether a more interventionist approach to forest management is required.

“Ultimately, these are discussions we are only just really starting to have in Australia,” said Nolan. “Do we let nature take its course, or do we start intervening through a more targeted management of Australia’s forest estate?”

“Many lessons are being learned from the [wildlife] response … to the Black Summer bushfires. In some cases, swift action was able to avert the extinction of populations of threatened species,” a DAWE spokesperson said. “Our threatened plants, animals and ecological communities also require ongoing efforts to build resilience to both catastrophic and sustained threats, including control of invasive species and active fire management, along with precautionary actions such as the establishment of insurance populations and translocation of plants and animals.”

One initiative: using alpine ash “super seed” in post-fire restorations. That collaborative effort is being conducted by Greening Australia, a forest restoration NGO, and the Minderoo Foundation, a philanthropic group founded by Australian mining magnate Andrew Forrest. Seeds are being gathered from populations exhibiting resilience to a hotter, drier climate, and to repeated short-interval fire — trees with characteristics including thicker bark and earlier flowering.

Seed stock genetic trials are being planned by Greening Australia in partnership with the University of Melbourne and Edith Cowan University. Researchers will test seeds from plants showing fire-resilient traits by planting them across an experimental network of “climate-adjusted seed provenance plots” in Victoria and NSW.

“To give these Alpine Ash communities the best chance of survival, we need to increase genetic variation into regenerating populations so they can adapt faster to our changing climate,” Elisa Raulings, science and planning manager at Greening Australia, said in a press release.

The magnitude of the Black Summer fires triggered an outpouring of financial support for reforestation organizations. Key among these was One Tree Planted (OTP), a global environmental charity that has since engaged in partnerships in Australia, including the Bushfire Recovery Nurseries program. OTP and the Foundation for National Parks & Wildlife (FNPW) are partnering to grow 1 million native tree seedlings in community nurseries.

OTP has committed to planting 25 million trees across Australia by 2025, working with Greening Australia on behalf of a reforestation program initiated by pharmaceutical giant AstraZeneca (AZ).

According to OTP’s Alistair Jones, the focus at the first AZ forest planting site, located in the NSW Southern Highlands, south of Sydney, was to reintroduce plant species that may increase wildlife food sources impacted by wildfires. These trees, including Eucalyptus punctata and Eucalyptus melliodora, supply food for many animals, including birds such as the regent honeyeater (Anthochaera phrygia), and mammals such as the koala (Phascolarctos cinereus) which Australia just this month listed as an endangered species for Queensland, New South Wales and the Australian Capital Territory (ACT) in Eastern Australia.

OTP is also involved in establishing a tree-planted wildlife corridor on lands adjacent to a fire scar (a burned strip of land) in Stirling Range National Park, a biodiversity hotspot in Western Australia where 38,000 hectares (94,000 acres) burned during the 2019-20 bushfire season. More than 1,500 species of flora inhabit the Stirling Range, and scientists are concerned they may never fully recover from sustained fire damage.

That’s why it’s so important to not only plant lots of trees, but evaluate which species are planted. “Historically, there has been a long-held belief that ‘local is best,’ or that plants sourced from the local region are best suited to restoration,” Jones explained. However, he warned that “as the climate changes, in many regions this is no longer the case. Species ranges are shifting, and it is expected in some areas novel ecosystems will form.”

An opportunity for holistic management

One advocate for this integrated approach is David Bowman, professor of pyrogeography and fire science at the University of Tasmania. “I see [post-fire restoration] as an opportunity, not as a problem, because it gives us degrees of freedom to build sustainability into fire management and the landscape,” Bowman told Mongabay. “The ultimate thing is to couple vegetation, wildlife, including exotic wildlife, and fire into a functioning system.”

While it may be a challenge for Australia to faithfully restore First Nations’ fire management practices in the forests of Southeast Australia, he said, traditional practices could be adapted to help residents live with fire.

Similar land management approaches are currently being developed in fire-prone regions of Spain, such as Catalonia, where land managers are thinning forests for bioenergy, clearing dense undergrowth, and allowing livestock to graze in some areas to reduce fire risk and fuel loads, and create “green fire breaks.”

Implementing such techniques is especially important now, Bowman emphasized, as Australian forest policy actively transitions away from native silviculture to a plantation-driven timber economy. Plantation timber is incredibly vulnerable to fire, he noted, and can drain management resources and skills away from native forests. Plantation susceptibility to fire presents a twofold problem: timber supply shortages and the release of stored carbon when burned.

Bowman led a 2021 study, published in Nature Ecology & Evolution, finding that 26% of NSW’s timber plantations were destroyed, and more than 70% suffered severe canopy fires during the Black Summer.

“This has created a wood supply problem in Australia because plantations are not supposed to burn. Some people offer plantations as an alternative to native silviculture, but plantations are extraordinarily vulnerable to burning,” Bowman said.

This warning comes as the Australian government continues pursuing its 2018 plan to expand national timber plantations by 1 billion trees over the next decade. Moreover, three fire-hit states are pivoting to source more timber from plantations, with NSW and Victoria phasing out native timber harvesting by 2030 and Western Australia by 2024.

Foresters and land managers often find themselves deeply divided in Australia over reforestation policy, and any transition from the native forest timber industry to tree plantations could have serious consequences for human resources and approaches for future fire management. However, the severity of the Black Summer fires should cause everyone to reconsider their positions.

“Talking about … changing [long term] forest practices is not simple. There are deep historical enmities [between various stakeholders]. To get rationality in forestry and forest management in Australia, and many other places, you need people to start anew,” said Bowman. “Climate change may be the catalyst for things to change.”