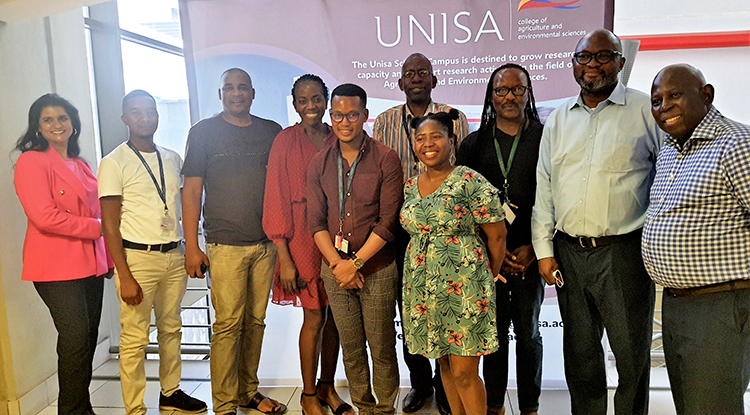 The College of Agriculture and Environmental Sciences (CAES) hosted a team from 54gene, a precision medicine and genomics company that is based in Africa and managed mainly by Africans. As a health technology platform company, 54gene is interested in building diverse datasets to unlock scientific discoveries and to improve diagnostic and treatment outcomes within Africa and the global community. 54gene is a potential player in the planned biotechnology platform in CAES.

At the start of his presentation, Professor Monde Ntwasa, CAES Acting Executive Dean, highlighted that Unisa, whose agenda in the past was dedicated to teaching and learning, is now building up its research capacity, in particular in experimental research.

In order to advance experimental research, a biotechnology platform is currently being established in CAES. Moreover, the university plans to acquire an experimental farm near the Science Campus. The main purpose of developing the biotechnology platform is to support activities related to the discovery and development of drugs, including anticancer drugs, diabetes drugs, biologics and associated reagents, and nutraceuticals and cosmeceuticals.

This shows that the college is already engaged in drug discovery activities with commercialisation potential. The Unisa biotechnology platform will not be limited to drug discovery activities associated with human health and diseases only. It will also include the development of veterinary solutions (i.e., vaccine production, breeding and animal/plant genomics), hence the acquisition of the experimental farm.

One of the major activities that will be part of the platform is computational biology since the aim of the platform is to host genomics repository facilities in a server at Unisa. The objective is to provide data and computational biology training on the African continent. Unisa plans to train students and to establish joint research projects that go beyond student exchange. In addition, Unisa has a presence in many countries in Africa and has a campus in Ethiopia.

What is unique about Unisa is its use of Drosophila melanogaster (the fruit fly) for preclinical drug screening, which is an affordable alternative to mice for the screening of drugs, especially on the African continent where studies on mice are very expensive and require extensive ethics. Moreover, only a limited number of mice/rats are allowed per study.

There are no ethical considerations for the use of fruit flies, and large numbers of flies can be used for experimental studies. Fruit flies also have a high genetic similarity to humans.

While a lot of research involving the use of the fruit fly as a model organism to study various diseases is being conducted in Europe and America, research activities of this nature in Africa are mostly limited to Nigeria, with a few groups appearing in Ghana and Kenya. In South Africa, Ntwasa’s group is the only one that uses the fruit fly for research. This presents an opportunity to share knowledge and to expand the use of Drosophila in Africa with the assistance of DrosAfrica.

Following Ntwasa’s presentation, Jude Uzonwanne, Chief Business Officer of 54gene, gave a presentation titled “54gene and the future of drug development” in which he described the origins and the objectives of the company. 54gene was founded in 2019 and registered in the United States (US). Its headquarters are located in Lagos, Nigeria, and Washington DC, US. The main agenda of the company is to build diverse datasets to unlock scientific discoveries and to improve diagnostic and treatment outcomes within Africa and the global community.

This agenda emanated from the fact that the genomic data available mostly consist of non-African genomes, and Caucasian genomes are often used as reference genomes in many applications, including diagnostics. This presents a major problem as the genome panels used for diagnostics do not reflect African genomes and therefore important variants within African populations are not captured.

It is well documented that Africans have the highest genetic diversity in the world. 54gene was established to solve the problem of the underrepresentation of African genomes and, ultimately, to improve the diagnosis and treatment of human diseases in Africa. 54gene aims to collect one million biobank samples from African individuals from different regions on the continent. About four biobanks are envisaged to cover the East, North, South and West African regions. 54gene is working very closely with private and public sectors of countries to build biobanks and sequencing capacity in these regions.

To date, 54gene has collected over 100 000 biobank samples, and the number is growing. These samples are housed and will be sequenced in Africa. At the moment, most of the whole genome sequencing activities are carried out on the Nigeria-based sequencing platform.

In its achievements so far, 54gene has also developed a chip, called GENIISYSTM, based on the African genomes and already saw an improvement in the detection of variants in African genomes. The GENIISYS chips are also revealing that what is currently known about populations in Africa may not be a true reflection of the diversity within these populations.

Currently, 54gene has a genome sequencing facility in Lagos, where all the biobank samples are sequenced. Since the Covid-19 pandemic started, some of the facility’s resources, skills and expertise have been directed to Covid-19 testing and diagnosis.

Beyond building genomic sequencing capacity in Africa, 54gene is also interested in drug discovery and development and it aspires to be a global pharmaceutical company operating from Africa. Currently 54gene’s drug discovery team is in the US (Washington DC and Cambridge, Massachusetts).

54gene wants more drug discovery activities to take place on African soil. It therefore supports the development of infrastructure and capacity in the area of drug discovery and development in Africa. Moreover, 54gene is currently training early career researchers through employment and mentorship programmes. Through these programmes, early career scientists get training and the opportunity to interact directly with key individuals who lead programmes under 54gene.

Furthermore, 54gene supports students’ research studies through scholarships/fellowships. 54gene plays a critical role in building capacity and hence is always exploring new partnerships. In his closing remarks, Uzonwanne highlighted that, through its partnerships, 54gene has built capacity in translational genomics in Africa and aims to foster partnerships to drive drug development all the way to commercial launch. In addition, 54gene is working on identifying target validation and hits based on the genomic variation observed in Africa populations.

Unisa as hub for collecting biological samples in Africa

Professor Olivia Mapholi, Chair of the Department of Agriculture and Animal Health at Unisa, gave a brief background on the African BioGenome Project, where she serves as co-chair of the steering committee. She highlighted that the African BioGenome Project is aimed at sequencing whole genomes of all the different species (animals and plants) found in Africa and creating a database containing all the genome data.

The project involves 76 participating countries and consists of 150 members. Africa has many non-human species whose genomes are unknown. Most genomes available in databases represent non-human species that are not found in Africa. So far, whole genome sequencing has been completed for three reptilian species indigenous to Africa. In this project, Unisa will be a hub for the collection of biological samples around Africa. Permits have been obtained from various countries, and capacity building will soon commence.

Preference is given to collaborative or joint research projects that are multidisciplinary, interdisciplinary and transdisciplinary in nature. The DITTC has been working hard to entrench innovation and technology transfer as part of the university’s key activities and competencies.

Following all the presentations, the panellists discussed possible collaborative work between Unisa and 54gene. The following points were mentioned:

Make a proposal on partnership prior to MoU (memorandum of understanding); pursue MoU with timelines for follow up discussions towards of MoAs (memoranda of agreement).

(i)    A broad MoA that covers the overall activities performed by 54gene and Unisa.

Scientists, Here’s How to Use Less Plastic