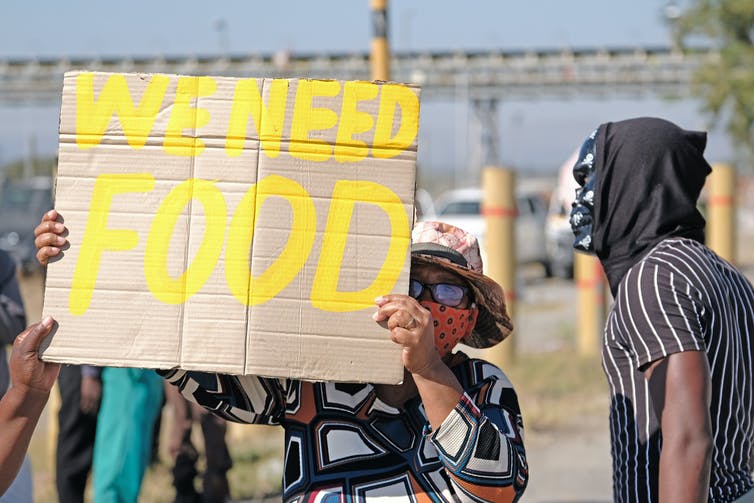 There is a long list of existing global crises made worse by the COVID-19 pandemic, including poverty and inequality. Another is food insecurity.

In South Africa, researchers found that, more than a year into the pandemic, food insecurity was still well above pre-pandemic levels. Simply put, this means more people than before do not have reliable access to sufficient, safe, nutritious food. The figure was already high before COVID-19: almost 20% of South African households had inadequate or severely inadequate access to food. In some of Cape Town’s poorer neighbourhoods the figure was as high as 54%.

But the pandemic hasn’t just shed light on existing problems. It has also identified those who might help to tackle these problems in the longer term: civil society organisations. In South Africa, these groups did a heroic job during the initial COVID-19 crisis, providing millions of meals for people in need. In the Western Cape province, for example, organisations provided more than half of the food aid distributed in the first few months of the lockdown, reaching 5.2 million people.

Without these organisations there would have been a much larger humanitarian crisis. And their work is ongoing as the need for emergency food aid continues. That’s because they didn’t just respond to the effects of the global pandemic: they also dealt with the fundamental inequalities of a food system designed to make profits for large corporate retailers and food processing companies rather than to provide safe and nutritious food for the majority of people.

And, as we argue in our recently published study, these organisations should be drawn more formally into food governance.

There are three main reasons for our argument. First, South African civil society organisations have shown they’re willing and able to hold the government to account. Second, they’re ideally placed to contribute their fine-grained local knowledge. They intimately understand the specific needs of the most vulnerable in their communities. Third, given their role in communities, they can play a huge role in education and information sharing about the food system and nutrition as well as performing agricultural and nutritional training.

The research showed that civil society organisations relied heavily on their existing networks and relationships with communities when looking to distribute food. These relationships helped them identify vulnerable people who might otherwise have slipped through the cracks and gone hungry.

It is clear from our research that civil society organisations already play a vital, varied role in South African society and governance. But it’s important that they be seen as more than service delivery mechanisms. This will allow them to play a bigger role in shaping a better food system.

Read more:
South Africa should learn from Brazil about how to tackle ‘hidden hunger’


There’s international precedent for this approach. In the Brazilian city of Belo Horizonte, civil society organisations worked closely with government departments to design and implement programmes that lessened hunger.

In the same way, South African civil society organisations need to be given a seat at the decision-making table and empowered to help drive long-term change.

Setting up systems for collaboration

There are a few ways this can be achieved. South Africa’s 2017 National Food and Nutrition Security Plan stipulated that a Food and Nutrition Security Council must be created. This process must be accelerated and civil society representatives must be among the members. Similar councils could be set up at both provincial and local government level.

It is also critical that short-term solutions such as emergency feeding be linked with long-term change of the system. This can be achieved by helping stakeholders in the food system – like government officials – “see” and understand the system as a whole. Community kitchens are a valuable way to do this. They bring people together not just to grow, cook and share food, but also to deliberate on how to solve food insecurity as well as recognise how it is shaped by other forms of inequality.

Civil society organisations must also be connected to the debates that help shape decisions and policies about food and policies that affect food.

Crucially, they should be allowed to operate in an enabling environment. They shouldn’t be controlled through heavy handed regulation or stifled by red tape. There are well-established government programmes for reducing red tape or increasing the ease of doing business, aimed at the private sector. Similar initiatives would benefit civil society organisations.

There have been examples of effective collaboration between civil society organisations and local and provincial government during the crisis to deliver food aid. This collaborative approach needs to be built on so that it becomes a lasting legacy of the crisis.

But building partnerships and enabling environments takes time and resources. COVID-19 has shown the government needs to invest in developing and strengthening relationships outside times of crisis that it can call upon in times of need.

Camilla Adelle, Research Fellow, Department of Political Sciences, University of Pretoria and Ashley Haywood, PhD candidate in the School of Government, University of the Western Cape

Are Small Farms the Solution to Food Insecurity? Uganda Study Shows Policies Can Get It Wrong