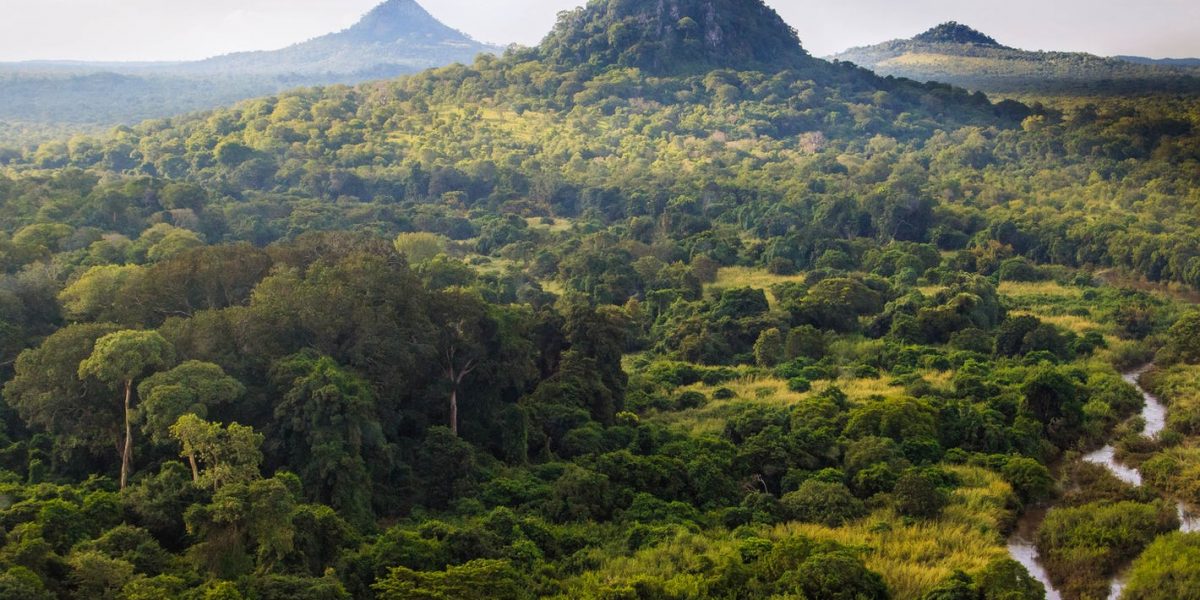 Gorongosa National Park has quite a history, from its inception 60 years ago to being battleground the subsequent Mozambique civil war, to its recent revitalization and engagement with the human community that lives among its borders.

The park enlists local people in management at all levels, and focuses on developing schools and girls’ empowerment programs, too, so in this context it seems a natural fit that the park would engage residents in a new, restorative agriculture venture which also serves to reforest the slopes of Mount Gorongosa, via agroforestry.

Matt Jordan is well suited to direct this project, having served as a Peace Corps volunteer in Mozambique after earning degrees in environmental engineering, and being of the belief that the fates of human societies and the natural world are intertwined, and can thrive together. Today, he serves as the Director of Sustainable Development for the park which includes overseeing projects like Gorongosa Coffee, and he answered some questions via email: his responses have been edited for brevity and clarity.

Mongabay: What crops are you planting within the park’s borders?

In the interval before coffee is productive for farmers, we support families with various seeds for crop rotation like beans and maize, and via horticulture. Alongside the restored coffee forests are direct reforestation plots, particularly around riverine systems. Furthermore, farmers implement permaculture on much of the land under coffee cultivation, conserving soil and moisture for improved yields.

How are these activities compatible with the goals and mission of the park?

All agricultural activities supported by the park are regenerative. The park supports three main value chains: shade coffee, cashew in the communities around the park, and honey. Both coffee and cashew are perennial trees that contribute to reforestation of the areas devastated due to tree cutting for unsustainable farming.

Through these programs, the park supports farmers throughout the whole production phase with inputs and technical assistance. All inputs are conservation-friendly and all agricultural practices taught to farmers are considered climate-smart (intercropping, crop rotation, and others).

Per the honey program, it helps local communities with extra income as well as an understanding of the importance of bees as the main pollinators.

At a high level, this mix of interventions (locally supported, with markets, and climate-resilient practices), can lead to a virtual value chain for smallholders linked to regenerative agricultural practices and, therefore, create a sense of stewardship and prosperity for both biodiversity and communities.

Who owns the land that is being cultivated, do the growers have security for their futures?

Indigenous or local people own the land where these products are being cultivated, though the park has some model fields where technicians cultivate these products with the help of local workers, creating jobs. It is the park’s goal to start working with associations (of farmers) and Mozambican law protects the right to land for local people, even those who do not have the formal DUAT (Direito de Uso e Aproveitamento de Terra) documentation.

Where and how are the coffee beans, honey & cashews marketed and consumed?

Gorongosa Coffee is being marketed in Mozambique, the U.S. and Europe. The global market has been extremely receptive and delighted to experience these products at home. We are working to be the first ever exported organic honey from Mozambique – currently, the honey is marketed and consumed within Mozambique.

As per cashew, the program is just now leaving the pilot phase after three years of work on proof of concept, therefore this will be the first year that the park will harvest and purchase cashew from local communities.

A regenerative style of agriculture that sequesters much atmospheric carbon, agroforestry also harbors much biodiversity: a new-to-science species of bat was just described which lives among your plantings, right?

What is the most exciting thing is that the coffee forests are bringing the biodiversity back. Ongoing research projects are proving that only a few years after establishment, these ‘agroforests’ shelter up to 80% of the biodiversity found in the rainforest. That is an amazing result.

Mount Gorongosa, where the coffee is cultivated, is home to myriad endemic species, including a new gecko to science – and a new bat – along with numerous invertebrates.

Since Gorongosa is a national park, how do you manage the interaction between such animals and crops?

The human-animal coexistence project is critical to the park. Most animals cannot reach the areas where coffee is produced since it is at high altitude (ie Mt. Gorongosa).

However, in the lowlands, we’ve championed an innovative solution using beehive fences as an effective deterrent to elephants entering farmlands. Not only does it help protect people’s crops, the honey itself has an economic and nutritional value, along with protecting pollinators. We are in the process of building the world’s largest beehive fence, and producing some high quality specialty honey.

How many people or families are employed by the agroforestry project so far, and what’s the vision for the future?

We currently employ 300 seasonal workers, too (which is great for coffee because harvesting is done in the maize farming off-season) and the sustainable development department has over 100 employees. In the near future, we will be incorporating sustainable forestry (an additional 30 jobs) and are looking to make sustainable beehives for local communities. We are also in the design phase for Mozambique’s first organic cashew processing facilities. Our goal there is to have 1,000 employees within the next five years, fundamentally transforming the opportunities available around Gorongosa National Park.

Does Gorongosa Coffee offer growers options to expand their operations over time?

Gorongosa Coffee is growing by around 100 hectares a year, and adding about 200 new farmers every year. Our goal is to reach over 1,000 hectares. We will need to be this big because we hope to restore 8,000 hectares of rainforest, using coffee production as the catalyst for more regenerative opportunities on the mountain.

This also includes the possibility of tourism on the mountain, so that visitors can experience the coffee flavors and then enjoy the wild landscapes and lions and elephants of Gorongosa.

How to design a forest fit to heal the planet