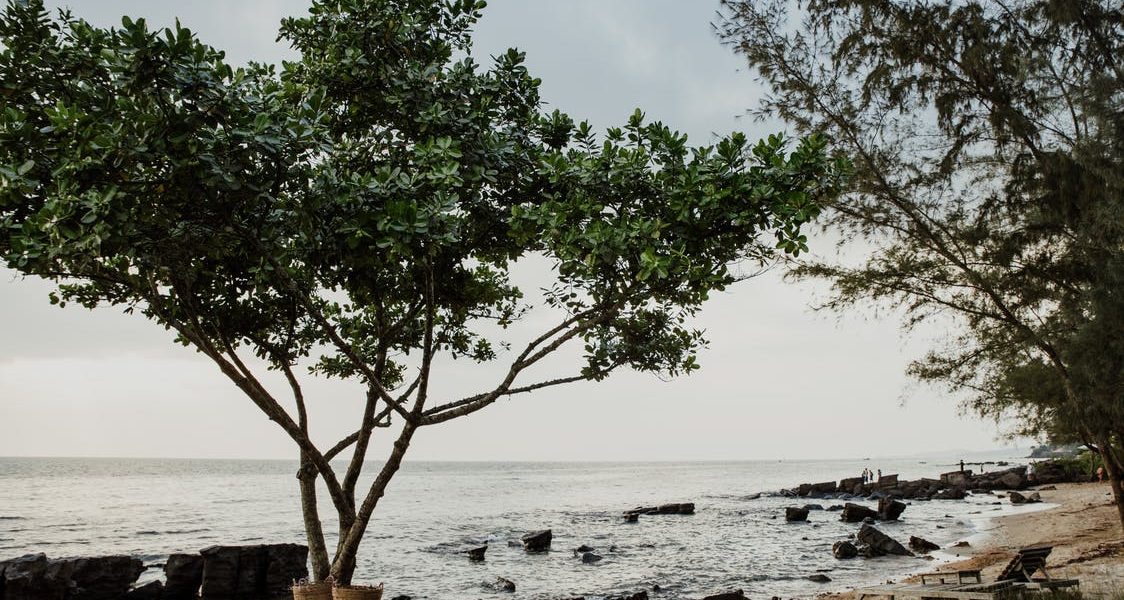 KWALE COUNTY, Kenya — More than 20 years ago, along the lush southeastern coast of Kenya, the area known as Vanga Bay was home to a mangrove forest spanning 4,428 hectares (10,942 acres). But some 18 hectares (44 acres) of mangroves have been lost every year for the past 25 years, a total of 451 hectares (1,114 acres) during this period.

Mangrove harvesting has been underway here since 1991 by local communities; according to the Kenya Marine and Fisheries Research Institute, approximately 87% of the Kwale county’s households use mangrove wood as fuelwood and building material, The overharvesting of the trees destroys the mangrove forest’s capacity to act as the first line of defense against ocean-related catastrophes.

They absorb three to four times more carbon than tropical upland forests and reduce the debilitating effects of floods, and their complex root networks are known to serve as a buffer against strong waves, high winds and storm surges for coastal communities.

In Vanga Bay, the loss of the forests is being keenly felt.

“We are vulnerable to recurrent floods from heavy rains in April and October, and sea level rise,” says Harith Mohamed Suleiman, a member of an Indigenous community at the forefront of promoting mangrove conservation and restoration. Indigenous ethnic groups living along the Vanga Bay coastline include the Digo, Duruma, Shirazi, Wapemba and Wagunga peoples.

“We also have floods and high tides when River Umba, which flows from Usambara Mountains in neighboring Tanzania, overflows into the Indian Ocean,” Suleiman adds.

For villagers, this has impacted their livelihoods; some 80% of the local economy depends on fishing. According to Mwanamvua Kassim Zara, a local fish trader, fish stocks have declined significantly over the past several years, and prices recently hit an all-time high due to the scarcity of certain species. This has especially been the case for dagaa (Rastrineobola argentea), a tiny silver fish and local delicacy.

Attempts to diversify livelihoods into subsistence rice and maize farming are threatened by recurrent floods and high tides, Suleiman says.

Against this backdrop, three villages launched the Vanga Blue Forest project in 2019, a community-led mangrove reforestation initiative that aims to conserve and restore Vanga Bay’s coastal ecosystems and role as a store of blue carbon, the carbon stored in marine and coastal areas.

The plan focuses on avoiding losses to precious natural resources to achieve economic, social and environmental benefits. It affirms that mangroves are central in combating climate change and conserving biodiversity. Kenya has committed to emissions reductions of 32% by 2030.

“Since the first NDC was submitted, we have gathered enough scientific information to identify mangroves as a pillar,” the environment ministry’s Otieno told Mongabay by phone. “We now have a national mangrove ecosystem management plan [for] 2017 to 2027 to boost Kenya’s contribution to limit global warming.

The Ministry of Environment and Forestry identifies integrating the use of nature-based solutions and, more so, the implementation of a national mangrove action plan, into national and county development plans as a pillar towards meeting the emission reduction targets.”

A project that spans villages and borders

The community-led initiative spans three adjacent villages in Kwale county: Vanga, Jimbo and Kiwegu. In neighboring Tanzania, communities are also engaged in conservation efforts and are in talks to establish a cross-border mangrove conservation initiative.

This planned reforestation project will run more than 140 kilometers (87 miles) from Diani in Kenya to Tanga in Tanzania.

The Vanga Blue Forest project operates under a larger umbrella organization known as the Community Forest Association of Vanga, Jimbo and Kiwegu, or VAJIKI for short.

The group is partnering with the Kenya Forest Service under the auspices of the 2016 Forest Conservation and Management Act, which promotes community participation, and aims to halt further degradation and deforestation of mangroves over a period of 20 years.

The community initiative is involved in restoring 460 hectares (1,137 acres) of the mangrove forest’s original footprint of 4,428 hectares. According to Mwanarusi Mwafrica, coordinator of the Vanga Blue Forest project, 450 hectares (1,112 acres) will be conserved, protected and allowed to naturally rejuvenate. The remaining 10 hectares (25 acres) will be reforested.

During the rainy seasons of April and October to December, the committee works hand in hand with other community groups and community members on a volunteer basis to plant mangroves.

“The project appeals to well-wishers who donate seedlings and provide incentives such as free lunches on mangrove tree planting days,” says Suleiman, the Indigenous community member who also chairs the VAJIKI Community Forest Association and serves as secretary of the Vanga Blue Forest project committee.

Less than a year since the project launched, with reforestation and coordination efforts in full swing, the COVID-19 pandemic hit.

“In 2020, we did not plant mangroves as planned because of COVID-19 disruptions,” Suleiman tells Mongabay. “When the Vanga Blue Forest was launched, our initial target was to plant 1,000 trees per year, per village. In total, we planned on planting 3,000 mangrove trees per year along the coast.”

So far, one of the villages have met this goal. On July 26, 2021, International Mangrove Day, community volunteers planted 1,000 mangrove seedlings in one day.

Suleiman says the trees were planted by approximately 100 community volunteers. The organization has not yet compiled data about how many seedlings have been planted since the summer.

The project uses two planting methods. The first involves directly planting mangrove seeds into the soil along the ocean’s edge, and the other requires growing mangroves in a nursery before transplanting them into mudflats along the coastline.

The reforestation process often involved trial and error at the beginning to figure out the best restoration practices and increase the trees’ survival rate.

“We alternate between planting directly and using a nursery because mangrove seeds are seasonal and their availability throughout the year varies from species to species,” Mwafrica says.

The mangrove seeds resemble long, sharp prongs and grow hanging from the parent tree. Once they’re ready to grow on their own, they fall from the tree, with the sharp end impaling itself into the ground.

However, the sticks tend to fall closely together, compromising their chances of survival. Community members volunteer to space the mangrove seeds to improve their survival.

Community members also volunteer to collect seeds in the forest, then pack them in a sack, soak them in salty water, and store them in a local nursery in preparation for planting day.

Technically, community mangrove restoration efforts began more than 10 years ago, with little success. Before the launch of the Vanga Blue Forest project, residents of the three villages planted 750,000 mangrove trees in the expansive forest.

The species were commonly loop-root, gray and spurred mangrove. However, according to Suleiman, the seedlings had about a 10% survival rate.

The project has not yet collected data on the survival rate of their latest reforestation efforts.

“We did not understand that different species grow in zonation from the mainland to the shoreline,” Suleiman says. “There are specific species for the mainland and those for the shore.”

According to Otieno, sightings of marine species such as milkfish (Chanos chanos), mullet (Mugilidae spp.) and octopus (Octopus vulgaris) have become more frequent in Vanga Bay since the project began two years ago.

He adds that government plans are underway to monitor the population of octopus for export purposes.

The reforestation project is also coordinated by the Association for Coastal Ecosystem Services (ACES), a charity registered in Scotland that supports mangrove and seagrass conservation initiatives by linking respective communities to international markets for carbon trading.

“The money is already in the bank account,” Mwafrica says. “All three villages will soon agree on their most [high-]priority projects to be supported using the funds. As agreed by the community members, priority areas will be anchored on four thematic areas: education, fresh water, health and sanitation, and environmental waste management.”

In 2020, donor funds were used to build flood walls to protect communities and rice farms from high tides, and purchase health care supplies.

The Vanga Blue Forest project plans to establish at least 2 hectares (5 acres) of fast-growing tree species such as Casuarina equisetifolia to meet the community’s demands for fuelwood.

Other concerted efforts to lift the pressure off mangroves include increased adoption of boats made from fiberglass rather than mangrove wood; fish traps made from palm and bamboo; and construction using bricks.

Kimiti says the project is an example of what should be done to mitigate climate change and simultaneously support livelihoods: “The community-based mangrove conservation initiative is a demonstration that mangrove forest conservation is a possibility.”