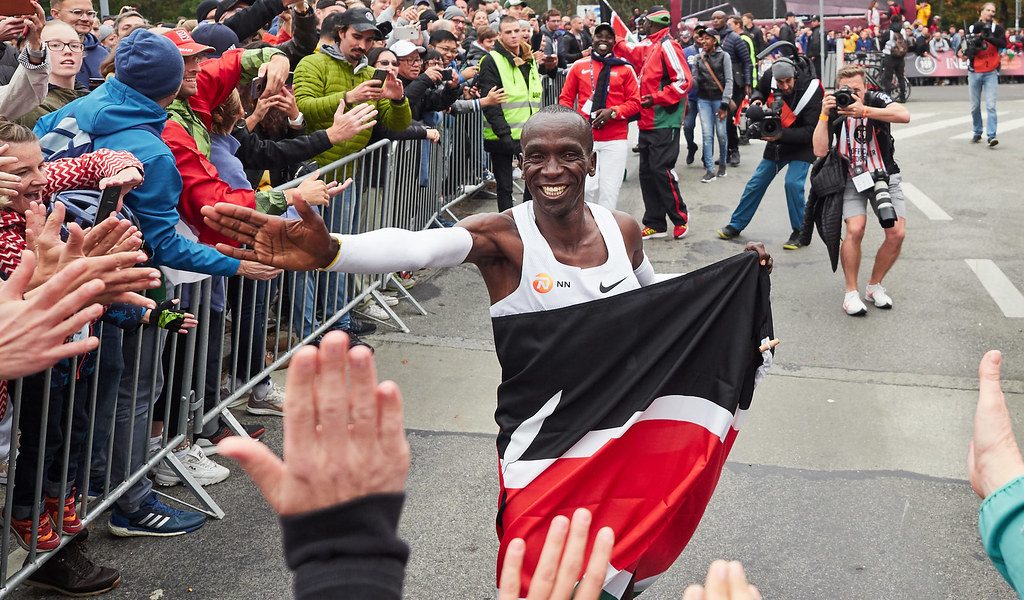 In August 2021, Athletics Kenya became the first national athletics body to join World Athletics as a signatory of the United Nations Climate Change (UNCC) Sports for Climate Action Framework — a collaborative initiative by the UN aimed at reducing carbon emissions associated with the sports industry. This came two months before the 2021 United Nations Climate Change Conference (COP26)  in Glasgow.

Over 50 Olympians and Paralympians from around the world have called on world leaders to deliver climate action in a video campaign titled “Dear Leaders of the World.”

Among the 50 athletes was Eliud Kipchoge, Kenya’s most renowned marathon runner. The release of the video coincided with the start of the summit in Scottland. In the video, athletes called COP26 “the Olympics of Climate Summits.”

While announcing the decision to join World Athletics as a signatory to the sports for Climate Action Framework, Athletics Kenya President Jack Tuwei noted that Kenya has already witnessed devastating effects from the climate crisis in Kenya and other African nations.

He added that Kenya has a rich tradition for environmental advocacy, such as Kenya’s first Nobel Peace Prize winner, Wangari Maathai, who contributed to sustainable development, democracy, and peace through her tree-planting initiative, the Green Belt Movement. Kenya also banned single-use plastics in 2017 and was an early signatory to the Clean Seas initiative.

At this year’s COP26 event in Glasglow, nations are expected to outline their plans to meet the climate action pledges made during the 2015 Paris Accords. One of the major pledges included reducing carbon emissions to limit global warming below 2 degrees Celcius.

The sports industry is a multi-billion dollar sector with widespread reach and engagement. Through its inclusiveness and ability to appeal across cultures, athletes believe it can be a strong tool in communicating about and addressing climate change.

In April 2021, Kenya’s martial arts star, Faith Ogallo, argued that athletes should learn from the COVID-19 pandemic and come together, “acting as champions to raise issues around climate change.”

She highlighted the need to be mindful of how athletes engage with the environment, particularly regarding the disposal of training materials. She called for athletes to come together and champion the betterment of the climate.

The climate crisis and its effects on athletics

The climate crisis is having a tangible impact on sports globally and is becoming a cause for major concern for sports personalities and governing athletic bodies.

In September, the Aspen Institute of Sports and Society program gathered a group of international experts including David Goldblatt, author on environmental issues and sport, Tim Leiweke, CEO and developer of the new Climate Change Pledge Arena in Seattle, and a US Olympic biathlete Susan Dunklee, for the conference Future of Sports: Climate Crisis and the Role of Sports.

Goldblatt said that the sports industry’s output is 5–6 billion US dollars annually and generates more transport emissions than other sectors, creating approximately 0.6–0.8 percent of all global emissions.

He urged the global sportswear industry to reach carbon neutrality within the next decade and become more transparent about the carbon it produces. He asked:

What will it be like playing futbol outdoors in Africa in ten years? It might not be possible.

One of the latest sporting events directly affected by climate change was the marathon event at the Tokyo Olympics in 2021, which was delayed because of concerns about extreme heat. Competitors complained of the brutal conditions in the “hottest ever Games.”

Other major sporting events impacted by climate change include the Sochi Winter Olympics, where organizers were forced to use artificial snow to supplement the melting snow at the Olympic venues.

The World Health Organization has predicted that heat stress linked to climate change could cause 38,000 deaths a year between 2030–2050.

In 2018, major sports personalities were affected by the heat in their events. Tennis player Novak Djokovic struggled with the humidity during his match at the US Open. Four other players had to retire due to the extreme heat.

Similarly, the world’s biggest sporting event, the FIFA World Cup, is scheduled to take place in Qatar in 2022. Though it typically takes place between June and July, it has been moved to November to avoid the excessive summer heat in the Middle East.

Though even with the change from mid-year to the end of the year, stadiums will have to be air-conditioned to keep the field and stadium temperature around 26 degrees Celcius.

Cricket, one of the world’s most popular sports, is also being affected by increasing heat. As early as 2016, 13 games in the Indian Premier League were moved from the Indian city of Maharashtra due to severe drought. Similarly, in 2018, the South African city of Cape Town experienced the worst drought in over 100 years, leading to reduced sports events due to low water supplies at most sporting venues.

Andrew Simms from Rapid Transition Alliance, a group of academics and campaigners who are promoting a faster global response to climate change, said, “A first step would be to bring an end to sponsorship from fossil fuel companies and products promoting fossil fuel-intensive lifestyles.” He added:

If players also speak out and say they believe clean air and a stable climate matter, millions more will see the possibilities for change. It will not only send a message of hope for the wider world, but it will help to guarantee a planet that is safe for sport.