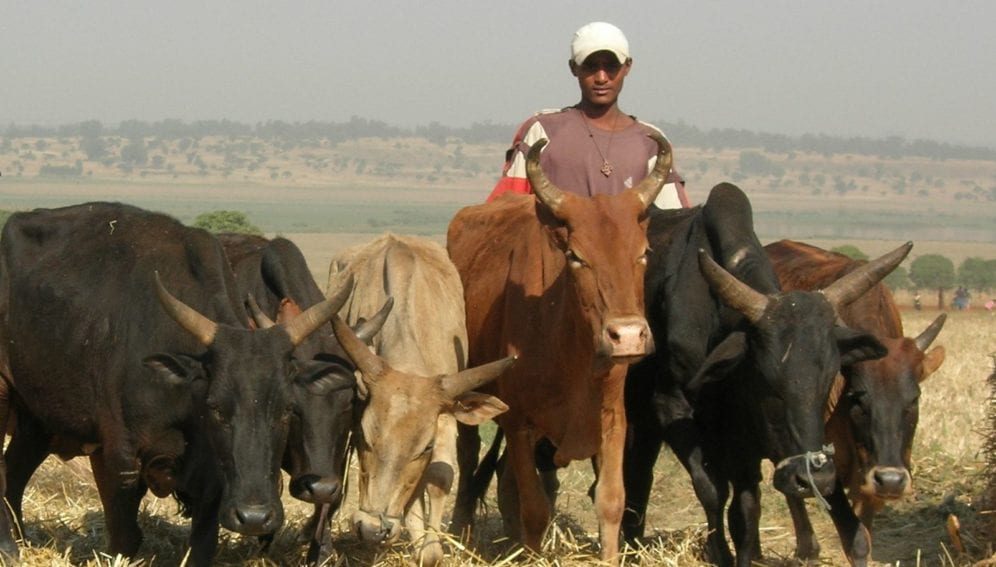 By: Royal Uche
[LAGOS] The increased conflicts between crop farmers and herdsmen in Nigeria could spill over into other countries if the competition for climate change-induced scarcity of resources such as water are not addressed, a study says.

The study says that activities such as burning of vegetation cover, deforestation and overgrazing by livestock have led to increased carbon emissions into the atmosphere, affecting rainfall and thus water access for livestock.

Researchers analysed data from the Global Administrative Areas Database, the Food and Agriculture Organization of the United Nations and other related research works, with a focus on climate change and current conflicts between crop farmers and herdsmen in northern Nigeria, according to the study published in the Journal of Cleaner Production last week (1 November).

“We cannot sit down and allow our cattle to die, hence the reason we migrate to areas with abundant grass and water.”

Drying grazing lands mean cattle herders in the country are forced to migrate onto arable farmland, often putting them at loggerheads with crop farmers.

“We sought to find out the root cause of the persistent farmers-herdsmen’s conflict which has lasted for decades,” says Obaisi Alaanuloluwa Ikhuoso, the lead author and a researcher at the University of Essex, United Kingdom.

“On an average, just over 409,700 hectares of forest are lost per year in Nigeria, with evaporation rate rapidly increasing while the aggregate rainfall has reduced by seven to 11 per cent per year, between 1990 and 2005, leading to warmer weather in the tropics,” he adds.

Yusuf Mohammed, a 27-year-old herdsman in Adamawa state, Northern Nigeria, tells SciDev.Net that inadequate rainfall in the country forces them to migrate.

“We cannot sit down and allow our cattle to die, hence the reason we migrate to areas with abundant grass and water,” Mohammed explains.

“We usually enter into agreement with the farmers, just to make peace with them.”
But a 45-year-old crop farmer in Akufo, Oyo state, Western Nigeria, Oluwafemi Abioye, tells SciDev.Net that some herdsmen do not abide by such agreements.

“Give herdsmen one hectare [of farmland] for grazing, and they will take ten hectares,” he says.

Abioye adds that he entered into such an agreement with herdsmen but the outcome was not desirable.

“I allowed herdsmen to remain on over 500 hectares of uncultivated farmlands with grasses, but they constantly migrate to my cultivated part of less than 200 hectares, thereby destroying my crops,” he explains.

“Other farmers would take drastic measures to stop that from happening, leading to conflicts that may even claim lives

According to the study, increased numbers of livestock and competition for scarce resources such as water is to blame for crop farmer-herdsmen conflicts.

“When livestock quantities exceed the capacity of available land and water, migration to other places is unavoidable and this will lead to conflict between immigrants and residents,” the study explains. “Constant conflict over land and water resources between herdsmen and farmers will have negative effects on food production and animal yield if there is no government intervention.”

“I would advise the government to provide a policy framework and structure for sustainable agriculture where both [crop farmers and herdsmen] can coexist peacefully,” he says.

Kabir Ibrahim, the president of All Farmers Association of Nigeria, adds that the government’s effort through the evolution of the National Livestock Transformation Plan which provides for the establishment of ranches will go a long way in mitigating the conflict arising from the competition of sharing the scarce resources between farmers and herdsmen.

Somalia Is Facing Another Food Crisis: Here’s Why – and What Can  Be Done to Stop the Cycle