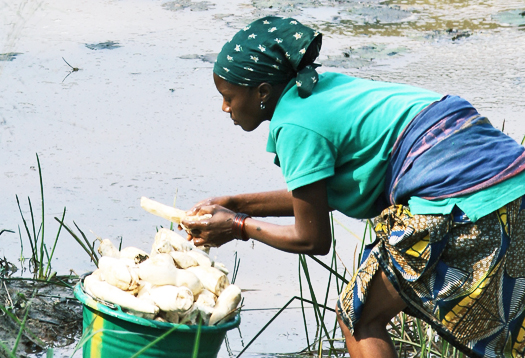 Poorly processed cassava, a food staple in much of sub-Saharan Africa, afflicts as many as tens of millions of children with konzo, a disease with devastating physical and cognitive effects.

Even children without physical symptoms of konzo appear to lose cognitive ability when exposed to the toxin that causes the disease, researchers report.

“That’s what’s especially alarming,” says lead author Michael Boivin, associate professor of psychiatry and of neurology and ophthalmology at Michigan State University. “We found subtle effects that haven’t been picked up before. These kids aren’t out of the woods, even if they don’t have the disease.” 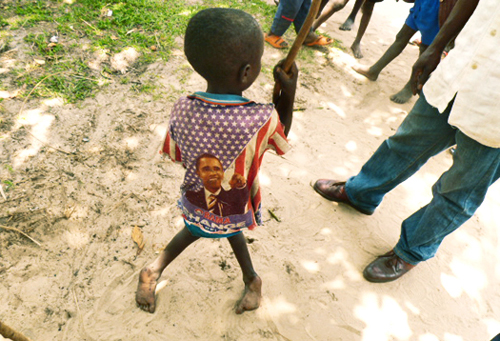 A child suffering from the disease konzo, which in the African Yaka language means “bound legs.” (Credit: Michigan State)

Konzo means “bound legs” in the African Yaka language, a reference to how its victims walk with feet bent inward after the disease strips away motor control in their lower limbs. Its onset is rapid, and the damage is permanent.

People contract konzo by consuming poorly processed bitter cassava, a drought-resistant staple food in much of sub-Saharan Africa. Typically, the plant’s tuber is soaked for a few days, then dried in the sun, and ground into flour—a process that degrades naturally occurring cyanide.

“As long as they do that, the food’s pretty safe,” says Boivin, who began studying konzo in 1990 as a Fulbright researcher in the Democratic Republic of Congo.

“But in times of war, famine, displacement, and hardship, people take shortcuts. If they’re subsisting on poorly processed cassava and they don’t have other sources of protein, it can cause permanent damage to the nervous system.

“Konzo doesn’t make many headlines because it usually follows other geopolitical aspects of human suffering,” Boivin says. “Still, there are potentially tens of millions of kids at risk throughout central and western Africa. The public health scope is huge.”

For the study, published in the journal Pediatrics, Boivin and colleagues from Oregon Health and Science University turned to the war-torn Congo. They randomly selected 123 children with konzo and 87 neighboring children who showed no signs of the disease but whose blood and urine samples indicated elevated levels of the toxin.

Using cognitive tests, the researchers found that children with konzo had a much harder time using working memory to solve problems and organize visual and spatial information.

They also found that konzo and non-konzo children from the outbreak area showed poor working memory and impaired fine-motor skills when compared to a reference group of children from a part of the region unaffected by the disease.

Konzo’s subtler impacts might seem minor compared to its striking physical symptoms, but the cognitive damage is similar to that caused by chronic low-grade exposures to other toxic substances such as lead.

Scientists eventually may be able to prevent such damage by creating nontoxic cassava varieties and introducing other resilient crops to affected regions, Boivin says. Meanwhile, public health education programs are under way to help stop outbreaks.

“For now,” he says, “if we could just avoid the worst of it—the full-blown konzo disease that has such devastating effects for children and families—that’s a good start.”

The National Institutes of Health supported the study.