For ‘Greener’ Concrete, Use Volcanic Rock? 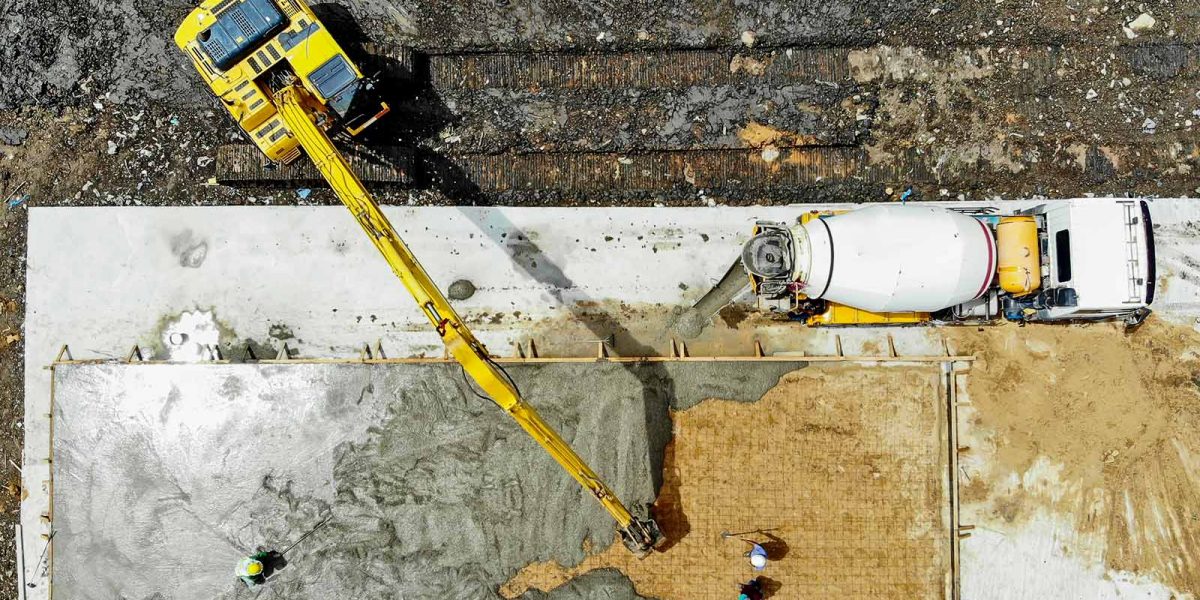 Replacing just one of concrete’s main ingredients with volcanic rock could slash carbon emissions from manufacturing the material by nearly two-thirds, according to a new study.

Concrete has given us the Pantheon in Rome, the Sydney Opera House, the Hoover Dam, and countless blocky monoliths. The artificial rock blankets our cities and roadways, underlies wind farms and solar panel arrays—and will be poured by the ton in infrastructure projects supported by COVID recovery investments in the United States and abroad.

That comes at a steep cost for efforts to combat climate change, however, because cement—the binding element that’s mixed with sand, gravel, and water to make concrete—ranks among the biggest industrial contributors to global warming.

“Concrete is ubiquitous because it is one of the most affordable building materials, it’s easily manipulated, and can be molded into just about any shape,” says Tiziana Vanorio, associate professor of geophysics at Stanford University.

But production of cement unleashes as much as 8% of annual carbon dioxide emissions related to human activity, and demand is expected to rise in the coming decades as urbanization and economic development drive construction of new buildings and infrastructure.

“If we’re going to draw down carbon emissions to the levels necessary to avert catastrophic climate change, we need to change the way we make cement,” Vanorio says.

Concrete’s CO2 problem starts with limestone, a rock made primarily of calcium carbonate. To make Portland cement—the pasty main ingredient in modern concrete—limestone is mined, crushed, and baked at high heat with clay and small amounts of other materials in giant kilns. Generating this heat usually involves burning coal or other fossil fuels, accounting for more than a third of the carbon emissions associated with concrete.

The heat triggers a chemical reaction that yields marble-sized gray lumps known as clinker, which are then ground into the fine powder we recognize as cement. The reaction also releases carbon that could otherwise remain locked in limestone for hundreds of millions of years. This step contributes most of the remaining CO2 emissions from concrete production.

Vanorio and colleagues are now prototyping cement that eliminates the CO2-belching chemical reaction by making clinker with a volcanic rock that contains all the necessary building blocks, but none of the carbon.

As the most-used building material on the planet, concrete has long been a target for reinvention. Researchers and companies have found inspiration for new recipes in coral reefs, lobster shells, and the hammer-like clubs of mantis shrimp. Others are partially replacing clinker with industrial waste like fly ash from coal plants or injecting captured carbon dioxide into the mix as a way to shrink concrete’s climate impact.

President Joe Biden has called for expanding carbon capture and the use of hydrogen fuel in cement manufacturing to help halve US greenhouse gas emissions from 2005 levels by 2030.

Vanorio proposes doing away with limestone altogether and starting instead with a rock that could be quarried in many volcanic regions around the world. “We can take this rock, grind it, and then heat it to produce clinker using the same equipment and infrastructure currently used to make clinker from limestone,” she says.

Hot water mixed with this low-carbon clinker not only transforms it into cement but also promotes the growth of long, intertwined chains of molecules that look like tangled fibers when viewed under a microscope. Similar structures exist in rocks naturally cemented in hydrothermal environments—places where scalding hot water circulates just below ground—and in concrete Roman harbors, which have survived 2,000 years of assault from corrosive saltwater and thrashing waves where modern concrete would typically crumble within decades.

“Concrete doesn’t like being stretched. Without some kind of reinforcement, it will break before it bends under stress,” says Vanorio, senior author of recent papers on microstructures in Roman marine concrete and on the role of rock physics in transitioning to a low-carbon future. Most concrete is now reinforced at large scale using steel.

“Our idea is to reinforce it at nanoscale by learning how fibrous microstructures effectively reinforce rocks, and the natural conditions that produce them,” she says.

LESSONS IN HEALING AND RESILIENCE

The process Vanorio envisions for transforming volcanic rock into concrete resembles the way rocks cement in hydrothermal environments. Often found around volcanoes and above active tectonic plate boundaries, hydrothermal conditions allow rocks to quickly react and recombine at temperatures no hotter than a home oven, using water as a powerful solvent.

Like healing skin, cracks and faults in the Earth’s outermost layer cement together over time through reactions among minerals and hot water. “Nature has been a great source of inspiration for innovative materials that mimic biological life,” says Vanorio. “We can also take inspiration from Earth processes that enable healing and damage resilience.”

From bricks and forged metal to glass and plastics, people have long made materials using the same forces that drive Earth’s rock cycle: heat, pressure, and water. Numerous archaeological and mineralogical studies indicate ancient Romans may have learned to harness volcanic ash for the earliest known concrete recipe by watching it harden when mixed naturally with water.

“Today we have the opportunity to observe cementation with the lens of 21st-century technology and knowledge of environmental impacts,” Vanorio says.

Vanorio teamed up with materials science and engineering professor Alberto Salleo to go beyond imitating geology to manipulating its processes for specific outcomes and mechanical properties using nanoscale engineering. “It is becoming more and more apparent that cement can be engineered at the nanoscale and should be studied at that scale as well,” Salleo says.

Many of cement’s properties depend on small defects and on the strength of the bonds between the different components, Salleo says. The tiny fibers that grow and interweave during the cementation of pulverized rocks act like tightening ropes, imparting strength. “We like to say that materials are like people: it’s the defects in them that make them interesting,” he says.

In 2019 an abiding curiosity about the ancient concrete he’d seen among ruins as a child growing up in Rome prompted Salleo to reach out to Vanorio, whose own journey into rock physics began after experiencing the dynamism of Earth’s crust during her childhood in a Neapolitan port city at the center of a caldera where Roman concrete was first engineered.

Since then, Salleo has come to see work on a low-carbon clinker inspired by geological processes as a logical fit with his group’s projects related to sustainability, such as low-cost solar cells based on plastic materials and electrochemical devices for energy storage.

“Thinking about a low-carbon clinker is another way to reduce the amount of CO2 that we send out in the atmosphere,” he says. But it’s only the beginning. “The Earth is a gigantic laboratory where materials mix at high temperatures and high pressures. Who knows how many other interesting and ultimately useful structures are out there?”