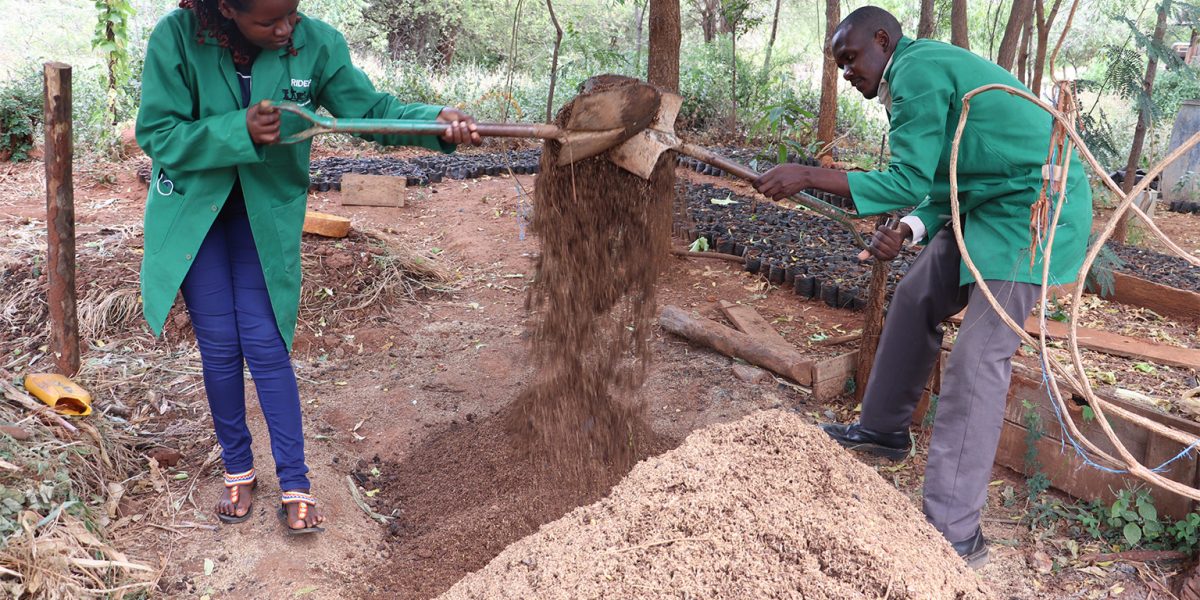 KARUNGARU, Kenya — Karungaru village in eastern Kenya’s Tharaka Nithi county is dry — so dry that even the resilient acacia trees have shed their leaves to cope. But amid these arid conditions, Peninah Muthoni is growing amaranth, spinach and other vegetables.

Thanks to agroecological techniques, Muthoni and hundreds of other farmers across the county are coaxing fresh vegetables to grow despite the harsh conditions.

“Bokashi has already nourished my soils,” she told Mongabay, “so what I need are cover crops to sustain soil moisture in the ground and keep watering the crops occasionally because it rarely rains in this place.”

Bokashi fertilizer, made by fermenting organic material to quickly create a nutrient-rich compost, is restoring depleted soils. After attending a workshop run by the Resources Oriented Development Initiative (RODI Kenya) in 2019, Muthoni put the techniques it offered to work in three gardens around her home in Tharaka Nithi.

Combining sack gardens, sunken basins, and making bokashi, she is growing enough vegetables not just for her three biological and 11 foster children. She says she even has a surplus for others in need.

The fertilizer is a key element of her approach. According to Patrick Gicheru, a leading soil scientist who directs the Kenya Agricultural and Livestock Research Organization (KALRO) in Embu county, south of Tharaka Nithi, farmers across the country are working with soils that lack important nutrients.

“We carried out a survey across the country because we thought that our soils were becoming unproductive because they were too acidic, but we were shocked to find that what was majorly lacking was zinc and potassium,” he told Mongabay.

The most common reason for depleted soils is overuse: when a field is planted repeatedly without being left fallow, farmers effectively extract vital nutrients with each harvest without replacing them.

Adding chemical fertilizer is one way to replace nutrients, but according to scientists, such fertilizers can harm soil microbes, which are key to replenishing nutrients. Many recommended fertilizers used in Kenya also lack key nutrients such as potassium.

RODI Kenya says thousands of farmers across the country have turned to bokashi to remedy this. RODI is an NGO that started in 1989 with the aim of enhancing income and food security of farmers.

RODI’s executive director, Esther Bett, uses bokashi on her own farm. “On my farm in West Pokot county, bokashi has proved to be far much better than synthetic fertilizers and even other organic manures because it takes just two weeks to prepare,” she said.

The beauty of this biofertilizer, Bett said, is that farmers can make it themselves using locally available materials. Several organizations as well as some individual farmers have begun producing and packaging the fertilizer commercially.

Bett said a farm with badly damaged soil can be restored over the span of three years.

Not everyone is convinced. Philemon Olembo, who grows maize on a 1.6 ha (4 acre) smallholding in Kakamega County, says he prefers chemical fertilizers because they are more concentrated, can be applied to save already-malnourished crops, and are readily available for sale.

“It is common knowledge that organic fertilizers can help build the soil, but here, we do not have that patience,” Olembo told Mongabay. ”We are in farming business and so we need something that will give us results as fast as possible.”

According to Bett, while chemical fertilizer adds nutrients to soil that are then consumed — or washed away — immediately, bokashi adds both nutrients and microorganisms. Chemical fertilizer needs to be applied every season, she said, “but bokashi leaves your soils nourished for the next three or four seasons and that’s why we keep reducing the volume for the starters. After the third application, the soils return to their original state when the land was still virgin.”

While the amount needed will decline each year, in the first season, a farmer will need 20 50-kilogram (110-pound) bags of bokashi per acre (roughly 2,400 kilos per hectare). Each bag costs 2,000 shillings (nearly $18), making that initial investment well beyond the reach of smallholders with limited income.

“It is an expensive affair,” Bett said, “and that is why we ask the farmers to learn how to produce bokashi on their own. We also encourage them to begin with a small portion of their land depending on their ability. One can start with as small as a quarter of an acre. Once the land is rejuvenated, they can move to another quarter.”

Farmers can make bokashi fertilizer themselves, said Erastus Maina, the officer in charge of production at RODI Kenya.

The bulk of the raw material is farmyard manure. This is mixed with charcoal dust to aid in aeration and elimination of toxins. Bran, the hard, outer layers of a cereal like rice, wheat or maize, is added to accelerate decomposition.

Another component is molasses, a byproduct of the sugar-making process that is available in livestock supplies stores across the country as a sweetener for cattle feed. In bokashi, it provides energy for the microbes.

Rice husks are also added, if the farmer comes from rice-growing area, but coffee husks, crushed dry maize cobs, or any shiny agricultural waste can be substituted. Such shiny waste, Maina said, contains silicon. Silicon in soil makes plants grow bigger and stronger as well as more resistant to pests and harsh weather.

Topsoil is also added to bokashi to introduce microorganisms, along with yeast, which is available in livestock supplies stores, to aid the fermentation process. Finally, egg shells or ash are added to introduce calcium. Ash also contains carbon, magnesium, potassium and phosphorus.

Once these components are mixed and heaped together and covered with polythene, the fermentation process begins immediately, reaching a temperature of more than 60° Celsius (140° Fahrenheit) in 24 hours. It is then turned over and over again every day to control the heat for eight days. After that, it is spread in a thicker layer and left to cool down completely for the next one week, when it can be turned just once a day.

“Unlike other manures which take up to three months to decompose, bokashi is usually ready for use after just two weeks,” said Maina.

RODI Kenya has also introduced bokashi and other agroecological techniques at farms run by 35 prisons across the country. The organization is also working with 28 schools. “We also package and sell it to farmers, and the interest has been growing,” Bett said.

According to Million Belay, coordinator of the Alliance for Food Sovereignty in Africa (AFSA), proven techniques like these are among the keys to strengthening agriculture and food systems in Africa. He said the adoption of agroecology faces obstacles because seed and fertilizer companies from industrialized countries see Africa’s agriculture as a potential market for their synthetic fertilizers, pesticides and hybrid seeds.

Belay said African governments need to invest in agricultural research, especially in the agroecology sector. “Universities across the world are releasing graduates who believe that for Africa to be food secure, it has to use agriculture systems practiced in the West. This has denied agroecology the financing support it deserves,” he said.

But, Belay said, everything begins with the health of the soil and sound farming techniques. “Well-maintained, healthy soils will always give you healthy food even when climatic conditions are unfavorable,” he told Mongabay.