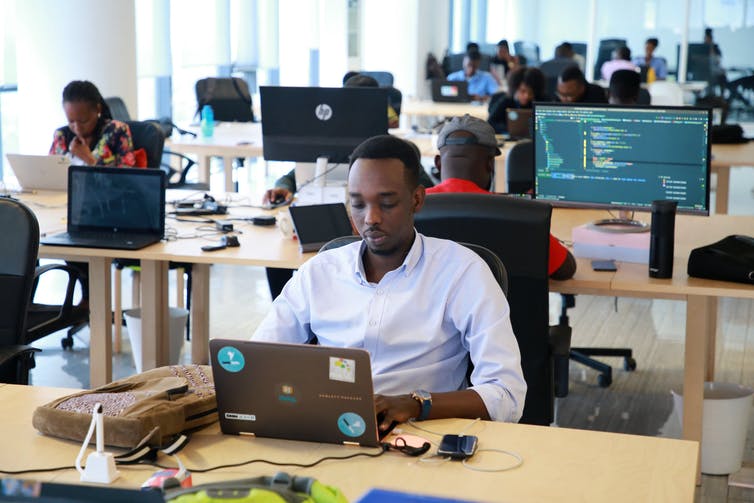 Today more than half of the world’s population is connected to the internet. In Africa, there are over 590 million internet users and over 800 million mobile phone subscribers.

Some observers note that such diffusion of digital tools and connectivity is bringing political, economic, social and cultural transformations on the African continent.

One such change is that workers from Lagos to Johannesburg to Nairobi are carrying out various forms of digital work. These are activities which involve manipulation of digital data using tools such as mobile phones, computers and the internet.

Examples are transcription, article writing, image tagging, search engine optimisation, and inbound and outbound customer services, which can be done for clients anywhere.

As a result, governments, development organisations and civil society look towards digital work as a fix for African countries’ development problems, including unemployment, poverty, and inequality.

For our new book, The Digital Continent, we conducted a five year study to investigate call centre work and the remote gig work and its implications for workers in five African countries: South Africa, Kenya, Uganda, Nigeria and Ghana.

We argue that job quality in digital work remains questionable.

We show that while digital work can bring some forms of freedom and flexibility into the lives of workers in the five countries, it can also contribute towards their precarity and vulnerability.

We conducted in-depth interviews with call centre workers and remote gig workers to understand their experiences of digital work, income, working hours, employment relations, and algorithmic management of their labour and body.

A majority of those we interviewed noted new digital jobs as one of their important sources of income. But this should be read with caution.

Call centres are notorious for contingent employment relations – that is, flexible and short-term contracts.

Firms’ use of temporary staffing agencies to cut labour costs is also common. Call centre agents can be hired and fired easily. For example, an agent in Nairobi told us that in April 2016 his firm fired 70 workers.

Companies also relocate with relative ease. Though in South Africa call centre operations have grown in recent years, several have closed down in Kenya, Nigeria and Ghana. Some companies moved to destinations with cheaper labour. Unfortunately exact data on this is hard to come by.

Similarly, workers on the continent see the digital gig economy as a new opportunity. While technological barriers may have been reduced, they face various hurdles to earning a living in the global gig economy. A worrying trend is that few actually earn an income on platforms where flexible digital work is made available.

Upwork is the world’s largest platform in terms of registered workers and the most popular among workers on the continent. But our estimates suggest that less than 6% of the Africans registered on it ever earn a single US dollar. In the case of Ghana and Uganda, these figures are as low as 3.1% and 2.7% respectively.

There is an oversupply of labour on the gig economy platforms. Respondents also told us that some clients do not want to give contracts to workers on the continent.

On platforms, work is primarily short-term. Some tasks (like image tagging) take as little as a minute to complete; others can last longer (like virtual assistant work). The short-term contracts mean that workers have to constantly search for work on platforms to earn an income. Yet compensation can be low.

Because some platforms pay as little as $0.10 per task, workers resort to working on multiple contracts, which means longer and unsociable hours. Some of those in our study spent up to 80 hours a week working.

Platforms also give employers access to a planetary workforce, so workers have become more expendable than ever. Workers we spoke to noted that clients preferred lower-cost labour destinations, such as India and the Philippines.

Increasing use of algorithmic management for surveillance and control of workers and the labour process is making digital workers even more vulnerable.

In call centres, technological tools like customer relationship management and workforce management are used to maximise workers’ time on call. Call centres are known as “assembly lines in the head” for this reason.

In the gig economy, workers face similar pressures with algorithms keeping track on them by taking a screenshot of their laptops.

While some platform workers can schedule the time and place of work the way they want, this flexibility isn’t available to everyone. Only experienced gig workers were able to achieve some form of flexible working.

Surveillance and algorithmic control result in loneliness and social isolation. Complaints about mental and physical stress, including sleep deprivation, were common among our respondents.

Some gig economy platforms openly state that clients do not have to pay if workers fail to meet the target or if clients are not satisfied with the work. There were dozens of stories of workers in our sample who never got paid for work done. Wage refusal or withholding pay is considered forced labour by the International Labour Organisation.

Call centres are considered flat organisations with very few opportunities for internal progression within a firm. A majority of the agents we interviewed did not consider their work at call centres as a long-term career option. We met workers who had been in the sector for over five years with no real progression in salary or working conditions.

Platform companies and organisations such as the World Bank have built a rhetoric around the gig economy as enabling self-employment or entrepreneurship. Our book shows a less positive reality. Digital work opportunities don’t always translate into good quality jobs, and may not be sustainable.

We see a need for research and activism that exposes how digital work is done. We also call for government action to uphold worker rights. And we advocate for building worker solidarity in digital economy networks.