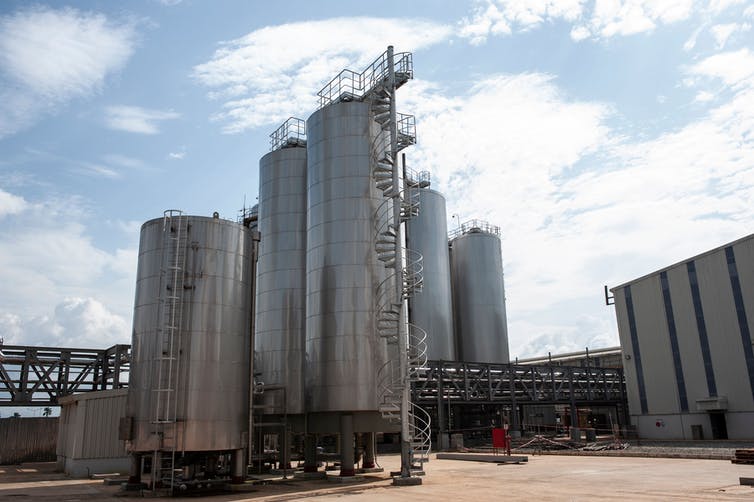 Antibiotics are life-saving drugs produced primarily by microorganisms which have been found in a variety of environments.

From penicillin discovered on mouldy old laboratory plates to tetracycline from soil, these compounds revolutionised medicine. The antibiotic industry is now worth over US$40 billion.

Yet despite the importance of antibiotics, the size of drug companies and continuous research in developed countries, the antibiotic pipeline is almost empty.

Antibiotics are life-saving drugs produced primarily by microorganisms which have been found in a variety of environments.

From penicillin discovered on mouldy old laboratory plates to tetracycline from soil, these compounds revolutionised medicine. The antibiotic industry is now worth over US$40 billion.

Yet despite the importance of antibiotics, the size of drug companies and continuous research in developed countries, the antibiotic pipeline is almost empty. Few compounds that can be turned into drugs are being discovered, and pharmaceutical companies are more interested in improving known drugs. This means there aren’t new classes of antibiotics coming onto the market. And we need new ones because disease-causing bacteria continue to overcome most of the antibiotics in use globally.

Read more:
The world needs ‘antibiotic guardians’ to safeguard their future use


Whether in hospitals or veterinary services, there are also increasing cases of drug resistance in Nigeria.

However, Nigeria’s contribution to antibiotic discovery from microscopic organisms is almost non-existent. One reason is that research of this nature takes a lot of time and money. A compound can be under consideration for a decade and end up failing the global standard.

Plant-based products (herbal mixtures and concoctions) can be formulated quickly and some get approval from the National Agency for Food and Drugs Administration and Control as marketable products. But drug products of microbial origin are uncommon.

The last time Nigeria reported a novel antimicrobial compound of microbial origin was in 1986, under a project commissioned by Pfizer. The compound was used to treat coccidiosis in poultry and to promote growth in swine. It was the second such compound from Nigeria, but research stalled in the decades that followed.

While work continued on the potential of microorganisms as antibiotic producers, no novel compound was reported. The question became where to look next. Previous environmental clean-up research suggested a way of filling the gap: using fungi found in waste produced by chemical industries.

Sango-Ota, Ogun State’s industrial city, southwest Nigeria, is home to many industries, including producers of chemicals. In our research, we explored the waste (sludge) from these companies, looking for fungi with potential to produce antibiotics. We found six species that showed some promise.

The reason we targeted industrial sludge was that indiscriminate disposal of chemicals can alter the genes of organisms found in that habitat. It happens through long-term exposure, giving the organisms specialised properties. They might, for example, be able to produce new compounds.

Chemical wastes of selected companies stored in wells, tanks and other collection areas awaiting disposal into the environment were sampled. The sludge was collected from areas that have been undisturbed for a long time (bottom of wells, tanks and collection area). This approach was adopted to increase the chance of isolating fungi that possibly use the chemicals as food, and also produce substances that would help them survive at the expense of other intruding microorganisms.

We found that out of six fungi isolates, the organism Geotrichum candidum OMON-1 produced a novel compound that stops growth of and ultimately kills Staphylococcus aureus. This is a bacterium found on human skin which causes infections that are difficult to treat when they enter tissues. The compound also shows activity against other similar disease-causing pathogens found in food and water.

Working with India’s Institute of Microbial Technology, we purified the compound and identified it as carboxymethylcystyl-asparagyl-aspartate. It’s a peptide antibiotic with three amino acids in its sequence and has a low molecular weight compared to known antibiotics. It stopped growth of disease-causing pathogens after two hours.

Discovery of a new antibiotic compound from a Nigerian environment is good news for researchers in this field. The focus in recent years has been to look for novel microbial compounds in the polluted Lagos lagoon. Now we see that strains of fungi, and indeed other organisms with modified properties, might also be found in other industrial wastes. It could lead to treatments for infections and other disease-related conditions or to other products of medical or industrial importance.

Read more:
How we learnt more about dangerous pollutants in Lagos lagoon


There are many industries in Nigeria that produce large volumes of waste which is poorly processed and disposed of. In Lagos State, chemical and pharmaceutical plants are the most polluting from over 7,000 industries, with less than 10% capacity to properly treat their waste. Plastic and textile manufacturing plants closely follow.

The next step could be to try to improve the compound we found. But instead we recommend exploring other modified or specialised environments for isolates with possible antibiotic action against some of the deadliest disease-causing bacteria. These include Pseudomonas aeruginosa, Klebsiella pneumoniae, Acinetobacter baumannii, Neisseria meningitidis and Neisseria gonorrhoeae.

It is a more important task because these bacteria are tagged ESKAPE pathogens and are priority organisms according to the World Health Organisation. They have reduced the effect of known antibiotics, or made them ineffective, through antimicrobial resistance.


Last hope antibiotics are beginning to fail in their treatment, keeping many people in hospital and leading to death of others. While the Lagos lagoon and other natural water bodies are vast and a tenacious search could uncover useful compounds there, modified industrial environments could be a faster road to the prize.