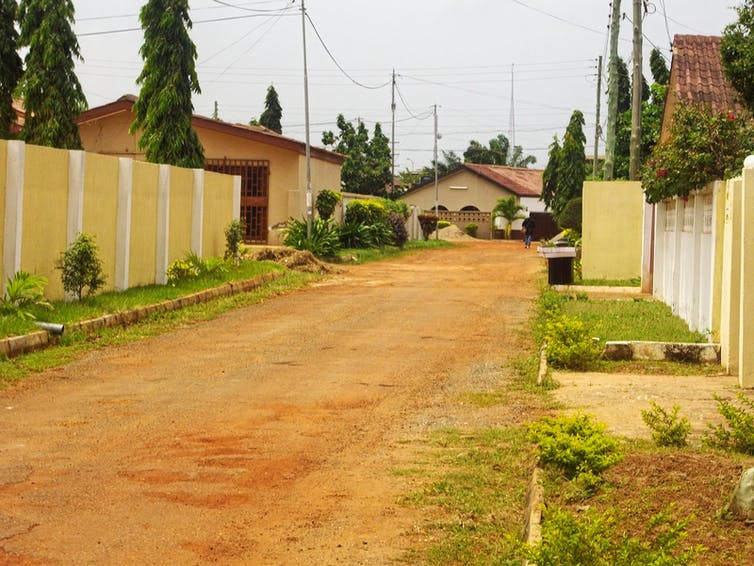 Ghana’s current system of land administration generates a lot of conflicts for a number of reasons.

Firstly, under Ghana’s customary land tenure system, multiple people can hold interest in the same land. This means that they cannot unilaterally sell or register it without the knowledge of the other parties or claimants. However, because the current land administration system is opaque and weakly coordinated, people are able to do that.

Read more:
Ethiopia’s blockchain deal is a watershed moment — for the technology, and for Africa


Secondly, Ghana laws require land owners to register their property with the Lands Commission. But concerns exist that the process is cumbersome and involves a lot of cost, including alleged bribe payments. As a result, many land buyers, after receiving their allocation notes, rarely complete the title or deed registration process.

Finally, even in cases where land buyers follow through with the title registration process, there is some evidence that title documents can be manipulated or tampered with at the land secretariats.

This means that land records in the country don’t reflect the reality. Land that’s already sold can misleadingly be captured in the Land Commission’s records as ’available’ or ’vacant’.

Ghana’s ineffective land administration system has serious implications. For example, several parcels of land are unavailable for development due to ownership challenges.

It also clogs up the country’s courts – a recent study suggested that about 57% of all court cases in Ghana are land related. And it can lead to violence. The fact that it can take an average of 10-20 years for the courts to resolve land conflicts, combined with a general lack of faith in the justice system, means that developers and individual land owners tend to opt for private protection by hiring armed gangs (popularly called ‘land guards’) to use force to ward off rivalry.

To address the problems, we have designed a framework for managing land transactions. If built and implemented, it would make it possible for potential land buyers to authenticate or verify the status of lands they want to acquire – whether the property is registered with the Lands Commission or has been deregistered from the commission’s records.

The framework integrates blockchain technology into the sale and purchase of stool lands in Ghana to make the processes more transparent, and the related transaction records impossible to tamper with.

Blockchain is a system of recording information in a way that makes it difficult or impossible to change, hack, or cheat the system. It is essentially a digital ledger of transactions that is duplicated and distributed across the entire network of computer systems on the blockchain.

Blockchain has become more widely known due to its use in Bitcoin as a ledger for financial transactions that are secured with encryption, verified and recorded by network nodes (also called a digital cryptocurrency). But the technology can be put to many different uses, such as the one we are proposing around land acquisition.

The register could contain information such as the locations, co-ordinates and boundaries of lands; names of the caretaker chiefs or queen mothers; details of existing allocation notes or title holders such as their contact details (phone numbers and e-mails); and other legal interests attached to specific lands.

Currently, if someone wants to buy land in Ghana, they contact the owner (who may be a chief, queen mother or a private person). After paying the determined price, the owner gives the relevant documents (such as a land allocation note) to the buyer to begin the title or deed registration process.

The problem with the current land sale and purchase process is that it is done offline. And the person selling the land might not be the only owner or the appropriate owner, which is why the process frequently breeds conflicts.

A blockchain land register would deal with these problems because land sale and purchase processes would move from offline to online.

In the first stage of the land acquisition, the potential buyer or the purported land owner might initiate the purchase or sale of the land on the online blockchain-enabled land acquisition platform. And since the platform would contain the contact details (such as phone numbers and e-mails) of those who had an interest in the land, the system would automatically notify them that someone wanted to sell or buy their land (stage 2).

In stage 3, if the person who initiated the sale of the land was not the true owner or the only owner, the appropriate parties notified about the transaction in stage 2 would have the opportunity to dispute and halt the transaction. The process would revert to stage 2 for resolution. If approved, the transaction would proceed to stage 4, where a purchase or sale document or a land allocation note would be issued.

The buyer could then use the allocation note, as proof of transfer or purchase or sale of the land, to begin the deed or title registration process. The allocation note could contain information such as the name of the stool and the chief (or queen mother – whatever the case might be) in charge of the jurisdiction; details of the land seller and buyer, their (digital) signatures and those of their witnesses, and the terms and conditions under which the land was bought or sold.

A blockchain-enabled land acquisition system would stop the unilateral sale of co-owned land because all relevant parties would be notified of any transaction initiated on their land. This would give them the opportunity to halt the transactions in real-time if it were being conducted on their blind side.

It would also prevent the multiple sale or purchase of the same land because when someone sold or bought land, the records would be captured and stored on the blockchain system. Being an online platform, it would be publicly accessible to anyone.

Therefore, potential land buyers could easily verify the status of land by just logging onto the blockchain land acquisition platform to see whether the land they wanted to acquire had been sold already or not or whether the person trying to sell it to them was the true or the sole owner.

Finally, blockchain records are also tamper-proof, which mean they can’t be manipulated.