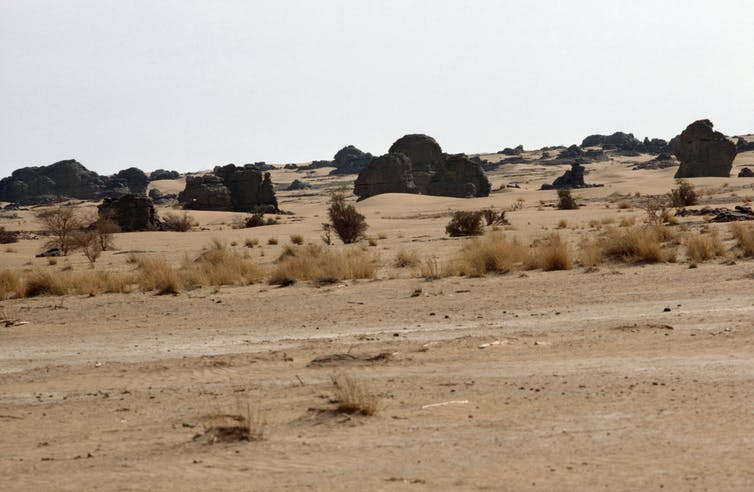 Nigeria’s President Muhammadu Buhari is about to take over the presidency of the Pan-African Agency of the Great Green Wall – the continent’s effort to restore degraded cropland, grazing areas and woodlands bordering the Sahara Desert. He takes over from Mohamed Ould Ghazouani, president of Mauritania.

Buhari has the support of the United Nations Convention to Combat Desertification and an international accelerator platform with new funding. But based on the slow rate of progress to date and the lingering confusion about the initiative’s vision, much work remains ahead to achieve farmer prosperity.

Africa’s Great Green Wall is an ambitious initiative started in 2007 by the African Union. It is now running far behind schedule. It needs to immediately speed up to reach its goals by 2030, as called for by the new infusion of money and as needed by the people along the edges of the desert.

The original aim was to plant an 8,000km long, 15km wide tree barrier linking Dakar to Djibouti. This was to stop “desert encroachment” and protect ecosystems and human communities in the south and north of the Sahara from the harmful effects of desertification and drought.

The African Union and the Pan-African Agency of the Great Green Wall discarded this idea in 2012, shifting the focus of efforts from trees to humans. Improving food security and livelihoods will be linked to containing desertification.

The new vision that emerged in 2012 is to establish a mosaic of green and productive landscapes across a broad zone surrounding the Sahara. The aim is to restore whole agroecosystems through land management practices that enhance the livelihoods of the rural people.

Reported progress has been slow and uneven, say reports commissioned by the United Nations Convention to Combat Desertification and the World Bank. Only some 18 million hectares have been restored so far, and movement in some countries is lagging. The Food and Agriculture Organization and United Nations have estimated that the pace must increase by a factor of 10 if the 2030 goals are to be reached.

Fortunately, help is on the way. On 11 January 2021 at the One Planet Summit in Paris, world leaders announced financial support of US$16 billion over five years – almost 10 times as much as international donors contributed between 2010 and 2019. A new multi-stakeholder platform will accelerate the Green Wall process through better coordination, implementation, monitoring, and tracking of impact. This accelerator will be managed by the agency headed by Buhari.

The task is a challenge but far from hopeless. Successful cases of regreening do exist, as shown by the Food and Agriculture Organization’s map of 2016. The accelerator would do well to study what has worked for regreening in various cases.

The following suggestions build on our experience and examination of successful cases.

Build on past successes

In the densely populated parts of southern Niger, farmers have regreened more than five million hectares since 1985 by adding at least 200 million trees to their farming systems. They did this not by planting trees, but by protecting and managing natural regeneration from the tree stumps already there and from the seedlings that emerge naturally from the soil.

On Mali’s Seno Plains, around half a million hectares have been regreened by farmers since the mid-1990s. In central Senegal, hundreds of villages are now greener than 30 years ago. In Burkina Faso and Niger, farmers have restored several hundred thousand hectares of barren degraded land to productivity by using simple water harvesting techniques.

These and other successful cases of restoration were driven and achieved through grassroots community mobilisation and the independent efforts of millions of farm households. They were also encouraged by some non-governmental organisations (NGOs) and development projects. They produced massive results at a very low cost.

Many of these efforts have not been officially reported as contributions to the Green Wall, as they happened outside the budgets and control of the national forestry departments.

The Pan African Agency now needs to convince governments to recognise and vigorously support investment in bottom-up, cost-effective, grassroots initiatives of this kind. This may not be the preferred choice of the government agencies through which funds are likely to pass. But many years of slow progress suggest that it is the only route to success.

No need to plant

The idea of the narrow green line across Africa still persists in too many minds. It is past the time to let it go. More trees are indeed needed, but planting is an expensive and precarious way to establish them in arid and semi-arid lands.

Budgets can be stretched tremendously by shifting to proven methods that achieve evergreening faster than conventional tree planting. We have discovered that regreening is almost always led by farmers. Farmers can protect and manage the natural regeneration of trees and shrubs on land they manage. There are also proven practices for rainwater harvesting and soil and water conservation.

The shift in vision has made it more challenging to track the progress of the Green Wall. It is easier to imagine and monitor a long wall of planted trees than a comprehensive restoration initiative. New baselines must be created. All progress should be counted, not only that which comes from government spending. The Pan African Agency should insist on greater clarity and consistency in what needs to be monitored.

Collaborate with the non-governmental sector

The non-governmental sector must complement the efforts of government departments. The members of the Global EverGreening Alliance have pledged their joint capacity to restoring hundreds of millions of hectares of degraded lands. The alliance includes nearly all of the major development and conservation NGOs around the world, and those working in the Sahel.

The NGO community is a tremendous resource. The Pan African Agency could greatly expand its impact by working with it.

Restoring the 100 million hectares of degraded lands surrounding the Sahara is possible. But the mindsets in governments and donor organisations must change. Success so far has been largely due to grassroots efforts with only modest support from external sources. Thus, the strategy going forward is clear: invest in scaling-up the proven successes, and let go of the ones that have failed.

While President Buhari has not indicated the direction the agency will take under his chairmanship, we hope he can follow these recommendations.

Somalia Is Facing Another Food Crisis: Here’s Why – and What Can Be Done to Stop the Cycle