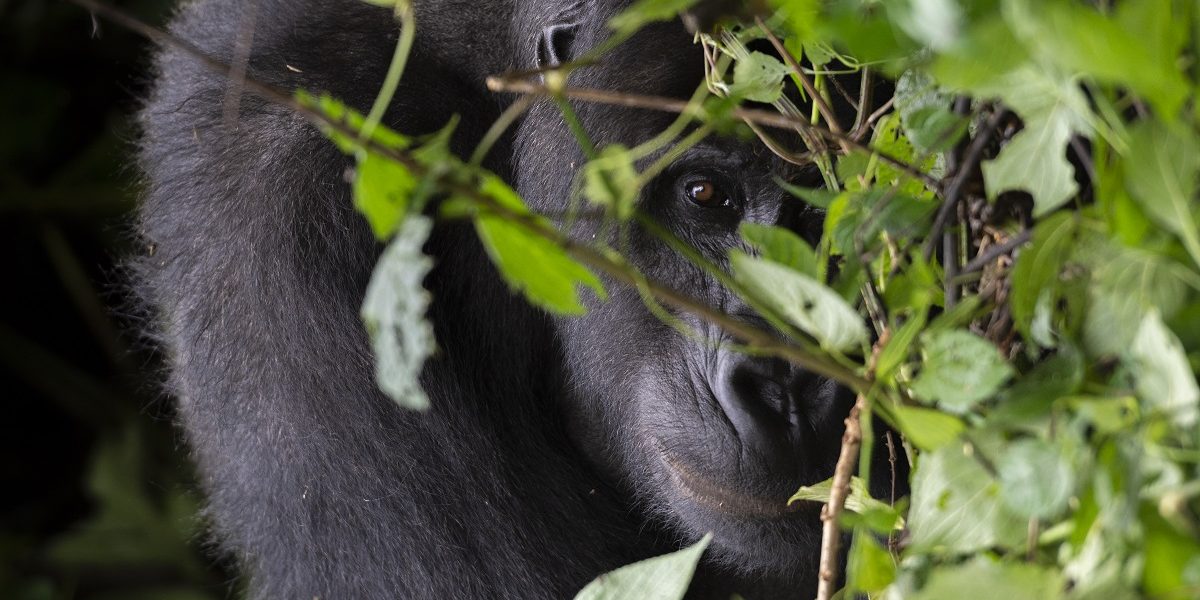 In eastern Democratic Republic of Congo (DRC), critically endangered Grauer’s gorillas (Gorilla beringei graueri) share their forest home with rural communities – which could help save their shrinking populations and habitat.

The DRC government officially recognized community ownership of three forest concessions, which combined are called the Nkuba Conservation Area, in April. The 1,580-square-kilometer (610-square-mile) patch of protected area, about twice the size of New York City, is situated between the Maiko and Kahuzi-Biéga national parks.

The formal recognition of Nkuba Conservation Area represents a win for community rights and conservation both, increasing the area of community-owned forests in the Walikale territory by more than 70%, according to the Dian Fossey Gorilla Fund, a non-profit that has worked with local leaders since 2012 to secure the area, a biodiversity hotspot, for protection.

Under the DRC legal framework implemented in 2016, each community-managed forest concession can be no larger than 50,000 hectares, amounting to the three concessions that form Nkuba Conservation Area. While the official land titles are not designated as conservation sites, the communities at Nkuba have entered a 25-year agreement to co-manage the area for conservation with the Fossey fund, which is responsible for the management plan and management decisions with approval from a union representing the communities.

In exchange for protecting gorillas by not hunting them and alerting authorities of poaching activity, the fund’s leadership say they provide education, jobs and conservation training to locals to aid protection efforts for the Grauer’s gorilla and other threatened species that live in the forests.

Now that locals own the forest concessions for themselves, they have a better incentive for protecting them and recognize their value, Tara Stoinski, CEO and chief science officer of the Dian Fossey Gorilla Fund, told Mongabay. 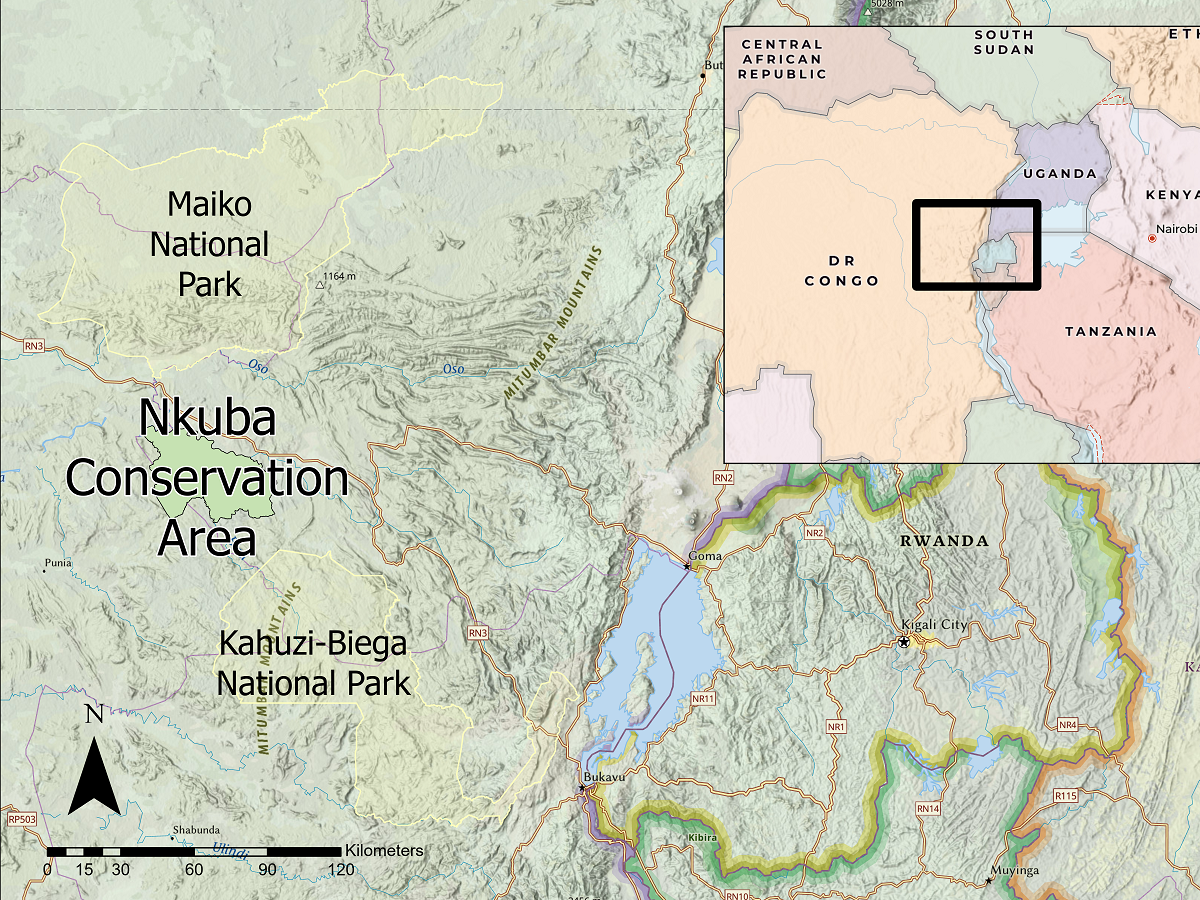 Nkuba’s strategic location acts as a haven for some of DRC’s most threatened and rarest species, including the Grauer’s gorilla, which is only found in eastern DRC. The species, also called the eastern lowland gorilla, faces poaching; habitat loss from widespread deforestation; and the effects of civil unrest from armed rebel groups fueling illegal mining operations, Stoinski explained.

Scientists estimate close to 17,000 Grauer’s gorillas existed in the wild prior to the civil war in DRC in the mid-1990s. Now, only 6,800 remain in the wild, according to the most recent estimates.

“They’re found nowhere else on the planet, so conserving them here is the only way to ensure that the species survives,” Stoinski said.

Researchers at the Dian Fossey Gorilla Fund estimate about 200 individuals live within Nkuba, but the majority of Grauer’s gorillas — an estimated 75% — live outside of protected areas. Nkuba makes up about 10% of the gorilla’s total habitat in DRC, said Urbain Ngobobo, the Congo programs director for the Dian Fossey Gorilla Fund. Research indicates that the greatest number of Grauer’s gorillas live in the Oku community forests, located near Kahuzi-Biega National Park.

As ecosystem engineers, gorillas help keep the entire ecosystem healthy. They play a vital role in seed dispersal by eating fruits and seeds that they defecate throughout the forest, and they clear paths for other animals, Stoinski said.

If they go extinct, so too might other wild animals and tree species in the area, Ngobobo added, so protecting gorilla habitat also ensures the protection of other wildlife.

Recent studies show that Grauer’s gorilla populations have suffered decreased genetic diversity from habitat fragmentation, making Nkuba’s role as a wildlife corridor between the two national parks crucial. A 2018 study found that Nkuba’s Grauer’s gorillas, a centrally located population, were more genetically diverse than populations living at the edges of its habitat range, bolstering the importance of Nkuba for forest connectivity.

“It’s playing the role of an ecological corridor, ensuring connectivity, allowing wildlife [to move] from one point to another point,” Ngobobo said.

Habitat fragmentation occurs when contiguous habitat, such as a forest, is sliced into smaller patches of habitat, often due to human activities like deforestation for logging operations or oil palm plantations. Animals living within those patches are thus reduced to a smaller area of suitable habitat, which can threaten those populations’ survival and decrease genetic diversity by restricting the number of potential mates.

“You don’t want these island populations, if you can help it,” Stoinski said. “One disaster could have a significant effect, so maintaining connectivity is really important.” 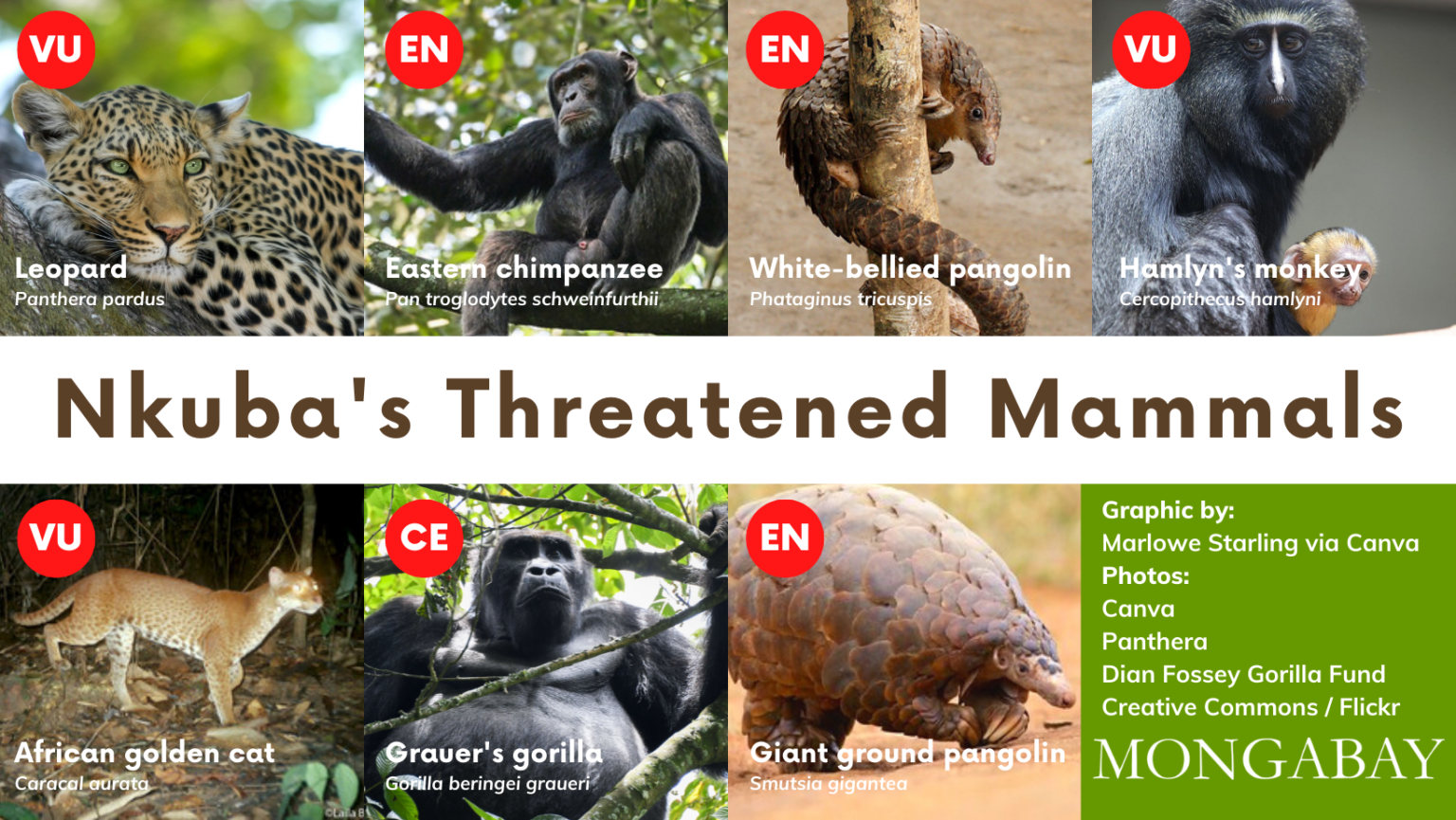 Biodiversity at stake in the Congo Basin

Central Africa’s Congo Basin, the second largest tropical rainforest in the world, stretches across an area of 3.7 million km2 (1.4 million mi2). The rainforest is home to a rich diversity of endemic and endangered species, from the charismatic mountain gorillas (Gorilla beringei beringei) that U.S. primatologist Dian Fossey studied in Rwanda, to more than 600 tree species that play a critical role as one of the Earth’s largest carbon sinks.

The Congo Basin receives a smaller share of forest conservation funding than the Amazon or forests in Southeast Asia, according to the Central African Forestry Commission. Stoinsiki said more funding is needed in Central Africa to protect the forest ecosystems people depend on.

“Ultimately, the health of these forests depend[s] on intact ecosystems,” Stoinski said. “Then we, in turn, depend on these ecosystems to keep our planet intact.”

Although climate change does threaten species living in tropical rainforests, biodiversity in the Congo Basin is mostly threatened by human activities and the direct killing of wildlife.

“Behind all poaching activities is a business,” said Dominique Endamana, the IUCN Regional Forest Program for Central and West Africa officer, in an interview with Mongabay. “People kill for money. People kill for [eating].”

For example, elephants no longer live in the area because they were poached to extinction for ivory. That’s a fate the Fossey fund is working to help the Grauer’s gorillas avoid.

Working with communities to champion conservation

Prior to the civil war, people depended on agriculture and small business for their livelihoods, Ngobobo told Mongabay in an email. But rampant violence left communities in eastern DRC in acute poverty, Endamana said, forcing them to hunt for bushmeat or work for environmentally damaging mining operations that harvest minerals used to make electronics sold in the Global North.

Rebel groups in mineral-rich DRC control artisanal mines and often poach gorillas for their high volumes of meat. Ngobobo said he and his team were kidnapped four times by rebel groups. Each time, however, locals living at Nkuba negotiated for their release, which he said was a sign of local support for their conservation work.

Plus, widespread food insecurity in the area caused locals to overexploit forest resources like medicinal plants and hunt for bushmeat, which Stoinski said was the greatest cause of wildlife decline.

Now that communities own the forests for themselves, they have a better incentive to protect them, motivated by the steady employment, health care, payment of school fees and improved living conditions the Fossey fund provides, Ngobobo said. He added that locals now alert Fossey fund staff when they notice a suspected poacher roaming their forest.

“Ultimately, for conservation to work, people need to be invested in it,” Stoinski said.

The charity has employed 70 full-time staff members from the local community at Nkuba and hires about 250 part-time employees every month, according to Stoinski. Survey teams conduct field work for gorilla research, unarmed rangers patrol the forests for signs of poachers, and several ex-poachers are also employed as Fossey Fund staff.

But establishing Nkuba as a community-managed forest wasn’t a simple process, and convincing people who earned income from mining to switch to conservation wasn’t easy, Ngobobo said.

“Mining offered direct benefits while people felt that without tourism, there was no other material benefit to be gained from conservation,” Ngobobo said in an email.

For example, elephants no longer live in the area because they were poached to extinction for ivory. That’s a fate the Fossey fund is working to help the Grauer’s gorillas avoid.

In addition to initial community pushback, it is legally difficult to obtain a community concession, so support from an NGO, such as the Dian Fossey Gorilla Fund, can help communities navigate the process.

Fossey Fund leadership says that its training and conservation programs have helped alleviate those pressures by providing an alternative source of income and focusing on sustainable harvesting techniques. For example, some community members are analyzing Grauer’s gorilla fecal samples to find out what kind of food they eat. Gorilla diets can provide clues to what types of wild fruits are edible, so cultivating those seeds in the community eliminates the need for harvesting fruit and other non-timber forest products in gorilla habitat, according to the Fossey fund.

Forest-dependent communities play a critical role in addressing climate change, say researchers at Human Rights Watch, who make the argument for placing such communities at the center of climate policies.

Similarly, Endamana warned against scientists like himself ignoring the needs, knowledge and values of local and Indigenous communities when making management decisions.

“We can’t talk [about] conservation without local communities,” Endamana said. “It’s impossible. We can’t conserve without them.”

Through educational programs, the Fossey fund is now training the next generation of conservationists, Ngobobo said, supporting 240 students. More young people than before, including women, are earning high school diplomas and attending college, he added.

“We’re very excited for Nkuba to be a field site where young Congolese biologists can come and do their master’s thesis, or their Ph.D., or just get a better understanding of the biodiversity that’s in their backyard,” Stoinski said.

“Me, as Congolese, I think it’s my responsibility to give my life, to give my knowledge, to give my energy, to give my time to protecting [gorillas],” Ngobobo said. “We need to act now. Now, and not later.”