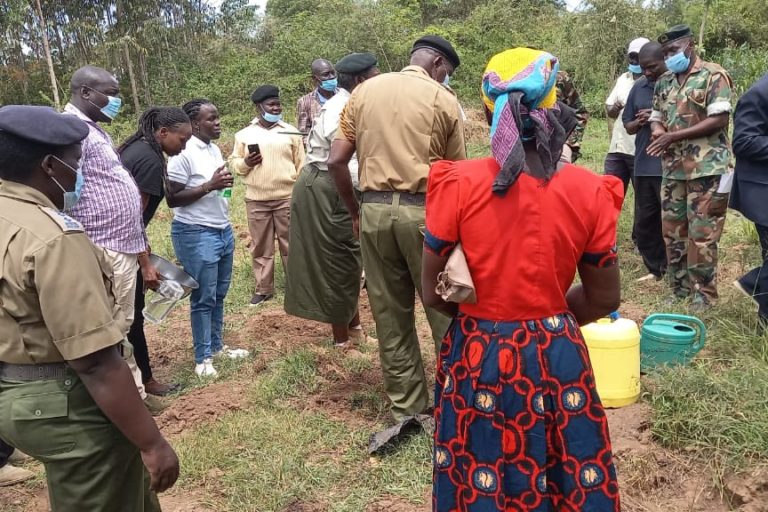 MIGORI COUNTY, Kenya — On a hot, sunny afternoon, Susan Aluoch is among a group of volunteers preparing a tree nursery in preparation for the upcoming long rains.

Aluoch is a member of the Mirema Community Forest Association (CFA), hailed for its successful reforestation initiative that regenerated the Mirema Forest and drew government attention.

Like other volunteers in the group, Aluoch says she decided to take part in the cause after years of suffering from recurrent floods in the once heavily deforested area.

Five years ago, the 810-hectare (2,000-acre) site that comprises the Mirema Forest was bereft of trees after extensive logging for charcoal in the 1980s and ’90s, according to Michael Onyango, a government forestry officer for Migori county, where the forest is located.

Located some 480 kilometers (300 miles) west of Kenya’s capital, Nairobi, the Mirema Forest is today a lush, green source of the many streams that feed the Kuja River. The river winds its way through the forest before draining into Africa’s largest lake, Victoria.

Edwin Ouma, a member of the Mirema CFA, says the main aim of the community reforestation drive was to protect the community from floods that would inundate nearby farmland and homes after long rains swelled the local streams.

“Long rains came with floods because there were no trees or vegetation to control the speed and flow of water,” he says. “This affected hundreds of families.”

Floods would destroy and sweep away crops, resulting in acute food shortages. Many farmers were forced to rely on government aid.

“I have firsthand experience of what deforestation can do,” Aluoch says. “I have been a victim of floods, drought and hunger. As a mother, I know the pain it can cause.”

The reforestation, management, and protection of the forest has played a big role in reducing the impact of floods in the area, according to Michael Agono, a researcher at Rongo University.

This has led community members such as Esther Omido, a mother of four, to return to their lands.

“The flood impact has greatly been minimized in the past two years,” Agono tells Mongabay. “Initially the forested area would turn into a big lake when rains came.”

Drawing attention from all corners

Compared to similar efforts across Kenya, the Mirema initiative is ranked among the best community-led reforestation initiatives due to the high survival rate of the trees planted, an outcome that caught the attention of the Kenya Forest Service (KFS).

Impressed by the community initiative and its success, the KFS sent two officers to oversee the reforestation and protection of the forest.

The community reforestation exercise has seen a total of 300,000 trees planted since 2018, with a survival rate of 70%.

Ronald Aloo, a KFS ranger managing the forest, tells Mongabay that other reforestation drives are mostly driven by the government and have a 50% survival rate. According to Aloo, the fact that communities were involved in the Mirema efforts may have led to its success — especially as nearby communities tend to oppose government-led reforestation initiatives, as in the case of the Embobut Forest.

William Odhil, chair of the Mirema CFA, says the first step of the reforestation intervention was to plead with community members who had encroached on forest land to relocate.

“It was not easy telling people to move from the land which they had occupied for almost two decades,” Odhil says. “It took a lot of effort for them to understand where we were coming from.”

However, what started as an idea from a small group of people in the CFA later attracted the wider community after they saw the results.

Once the area for reforestation was secured in 2018, the CFA started planting trees on the hilltop side of the forest, and slowly worked its way downslope.

“After two years, part of the forest was back, and green shrubs were all over,” Odhil says. “The impact of floods had reduced.”

Odhil donated a piece of his own land to establish the initiative’s first community tree nursery. Other CFA members also set up tree nurseries within their farms, contributing the money to buy seeds and growing them in the nurseries before planting them in specific locations in the forest.

The success of the reforestation drive attracted the attention of the county government, the national government, international aid group World Vision International, and a local bank that now provides financial support for the initiative.

With the help of these new supporters, the reforestation efforts accelerated over the past four years, resulting in at least 405 hectares (1,000 acres) of the forest being restored, according to Aloo. This represents half of the Mirema Forest’s original size.

To maintain a steady supply of tree seedlings to the CFA, the county government partnered with World Agroforestry (ICRAF) to both supply the seedlings and train CFA members on setting up and managing tree nurseries, and transplanting and caring for trees.

“These have been instrumental in ensuring the success of the community-led initiative,” Onyango tells Mongabay.

Two methods to regenerate a forest

With capacity building from ICRAF and World Vision International, the community adopted a combination of two methods for reforestation.

The first approach is called farmer-managed natural regeneration (FMNR), where naturally occurring seedlings within the forest are matured to full growth. This method involves pruning tree stumps to enhance faster regeneration and regrowth of trees that have been cut. The pruned branches can be used for firewood and charcoal.

“Natural regeneration of indigenous trees is faster and has been key to the success of this initiative,” Aloo says.

The second approach used by the community is establishment planting. This involves introducing nursery-grown tree seedlings into the forest. Their placement is spaced out in such a way as to fill in the gaps between trees that were cut down and to ensure an even distribution throughout the forest to replicate the forest’s diversity.

Mass planting exercises are also done twice a year during the long rainy season, in which the entire community is mobilized to take part.

“The community owns this drive, and they are zealously guarding the forest against any possible threats, and this is helping a lot,” Aloo adds.

CFA members meet every Monday, Wednesday and Friday to work on the nursery, plan tree management schedules, and carry out forest patrols.

The future of the forest

The government is in the process of fully gazetting the forest, a move that would see more KFS rangers deployed to secure the area as protected.

“We have plans of training community scouts who will join KFS officers in securing the forest,” Aloo says.

The KFS has laid out a five-year plan that will see the remaining section of the Mirema Forest fully restored.

The KFS says it’s currently drafting a policy paper that will see other reforestation drives adopt the Mirema CFA approach as an example of a successful Kenyan reforestation initiative.