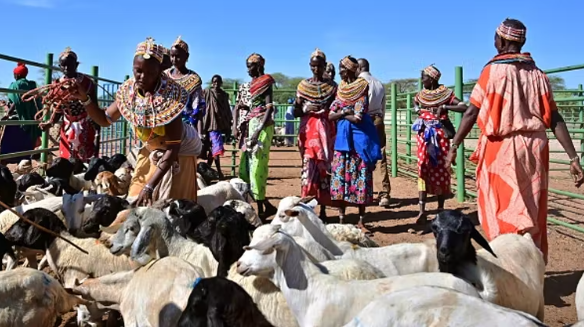 Over nine million Kenyans are pastoralists out of a total population of 50 million. Together they hold livestock worth over US$1 billion. Livestock is their source of food, health, and wealth.

But livestock also causes conflicts. In some Kenyan communities, clashes between farmers and pastoralists erupt due to the scramble for fodder, water and space. Farms encroach on rangelands while livestock invade farms.

These complex conflicts, which are rooted in history, respond to politics, and peak during droughts. The year 2021 was particularly fragile.

State and non-state actors engage in peace building, conflict resolution and reconciliation. What if they include livestock markets in peace-building? Could they mitigate conflicts between farmers and herders?

We believe they can.

We conducted research to understand how a different way of valuing the price of livestock could contribute to peace building. We did our research among livestock buyers in the Kerio Valley, Kenya, an area known for protracted communal conflicts.

The mechanisms influencing livestock pricing in Kenya have been studied extensively. In traditional price building, livestock values are determined through ad hoc negotiations.

But there is another system: the use of quality-based payments. Here, the price of an animal is determined through its weight, breed and health. Such systematic grading of animals is widely used in Namibia, Botswana and South Africa.

In our view, quality-based payments for livestock would set off a virtuous cycle. Firstly, it would lead to premium prices for livestock. This, in turn, could encourage pastoralists to reduce herd sizes, improve animal husbandry and increase forage demand. The end result would be farmers producing forage and trading in meat, milk and manure with herders. More forage would minimise the pressure on rangelands, improve animal health, lowers animal mortality during the dry season, and stabilise prices.

If co-designed with livestock buyers and sellers, we argue that markets will create better feeding systems and these, in turn, would address multiple goals of income, stability, environmental health and climate security.

The outcome, in our view, would be reduced conflict.

What it will take

First, livestock buyers must adopt trading behaviour. For example, they would have to weigh animals to determine prices. Weighing also gives pastoralists a fair value for their animals. Weighing is acceptable to butchers. But not to brokers, who buy two to three animals for sale to intermediate traders. They often use the absence of weighing scales as an argument against quality-based payments.

There are also complex cultural resentments of weighing among herders. Herders see price negotiations as part and parcel of their culture.

Similarly, traders also have a number of concerns, including the fact that weighing may expose their profit margins to herders. Traders are also concerned about the quality of the weighing scales, and the fact that it may not account for offal which meat inspectors tend to condemn due to parasite infestation.

Our second major finding was that quality-based payments only work if there is proper parasite and disease control as well as improved transport network.

The poor health of animals affects the whole value chain. This is because diseased animals are sold at every possible opportunity, prices are affected, and other animals are at risk of contracting diseases when infected animals are taken to a market.

Above all, trekking undermines animal immunity and increases the risk of spreading infectious diseases. For instance, cattle trek for three to four days and up to 200 km between the primary and terminal markets. They’re exhausted when they arrive at the market.

Using quality-based payments would necessitate enhanced veterinary and extension services for proper parasite and disease control as well as better transport. The transport infrastructure should be improved to encourage trucks to reach primary livestock markets. This would reduce the trekking of animals and related hardships.

The third finding is that quality definitions in the livestock trade need reframing. The cultural purposes often inform the standard definition of livestock quality. For example, the traditional consensus on the value of improved breeds leading to higher production and productivity is not necessarily important for the pastoral community.

Kenyan pastoralists prefer local breeds to improved breeds, arguing that large and heavy animals as well as those with long hooves cannot tolerate high temperatures or trek to distant grazing lands or to the market.

Therefore, the achievement of quality-based payments for livestock in socially, economically and environmentally fragile drylands is conditioned on agreeing on a broader definition of livestock quality. This should capture the animal’s physical and health attributes, its weather and trekking-tolerance and its purpose.