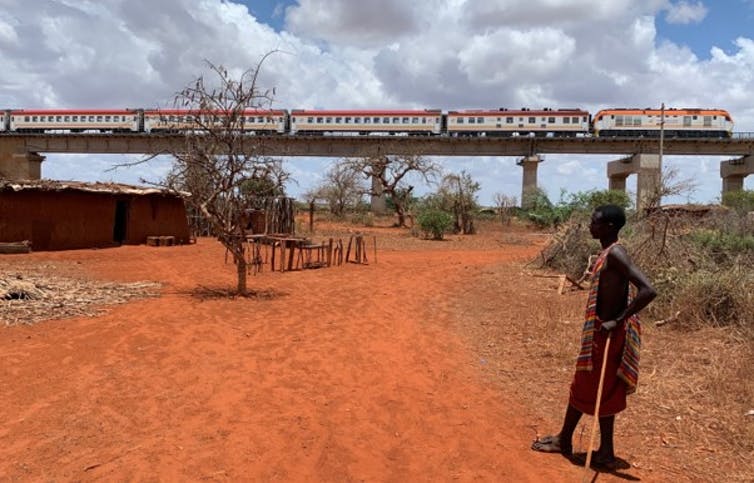 In 2014, Kenya started to construct a new railway to connect the Mombasa Port with the interior and on to landlocked Uganda and Rwanda. Today the Standard Gauge Railway stops abruptly at Naivasha, 120km northwest of Nairobi. Ultimately it is planned to reach the border with Uganda at Malaba, helping to connect East Africa’s regional transport and trade.

Costing US$3.8 billion, 90% of which has been provided by a bilateral loan from the Exim Bank of China to the Government of Kenya, this new passenger and freight railway is the biggest infrastructure project in the history of independent Kenya.

Alongside other large projects such as the Lamu Port-South Sudan-Ethiopia Transport (Lapsset) Corridor, the Standard Gauge Railway is central to Kenya’s current national development policy, “Vision 2030”. The policy frames these mega-projects as key in attracting the sort of private sector interest needed to fuel economic growth, increase exports and alleviate poverty.

According to China’s state authorities, the construction of the Standard Gauge Railway has driven Kenya’s economic growth by 1.5%, creating 46,000 jobs for local residents.

The reality, however, is far more complicated than such official narratives acknowledge.

In my study, I analyse the uneven sociopolitical effects of Kenya’s Standard Gauge Railway. In five months of fieldwork research, undertaken during several periods between November 2018 and January 2020 in different urban, peri-urban, and rural locations between Mombasa and Narok, I interviewed over 200 people to understand their experiences of the new railway project.


I found that, contrary to the government’s promises of prosperity, Kenya’s mega-railway is heading down the wrong track of development. My research shows that privileged groups, with sufficient access to economic resources, are experiencing several benefits. However, disadvantaged groups, particularly those in remote or historically marginalised regions, have found it more challenging to sustain themselves as a result of large-scale infrastructure development. The railway-related economic growth is not likely to remedy this, as the project planners expect.

In fact, I concluded that, instead of bringing prosperity to people, the railway project is further advancing inequalities in the country.

The railway and inequalities

With less than 0.1% (8,300 people) of the population owning more than the bottom 99.9% (more than 44 million people), Kenya is a highly unequal country. This is as a direct result of British colonialism and rampant nepotism and corruption since independence.

In rural Kenya, access to natural resources, like land, is one of the main determining factors of social mobility. Therefore, land acquisitions for the new railway was a significant development. The National Government paid US$29 million to acquire over 4,500 hectares of land for the first phase of the new railway.

However, this land acquisition primarily benefited large-scale landowners who have received sizeable financial compensation. As my research shows, many of these individuals have been able to reinvest the money in real estate or diversify their livelihoods by starting businesses.

Smallholders and squatters with no official land titles had to vacate the land they had occupied without any financial compensation.

As in other contexts across the Global South, large-scale transport infrastructures like the Standard Gauge Railway also advance the mobility of urban middle classes. With the new railway development in Kenya, this is particularly so for those who regularly travel between Mombasa and Nairobi for work, business or leisure. As the new railway is more efficient than long and exhausting bus trips or expensive flights, these groups are directly benefiting from the new railway line.

Rural populations still prefer to use bus and minibus services that offer more flexibility. To them, the railway also presents a number of direct challenges. In many cases, it blocks the existing travel and access routes, sometimes even dividing family land and splitting villages. Many people I interviewed see the Standard Gauge Railway as a government-controlled project that is only useful to people in Nairobi with no relevance to the rural poor.


The railway developments have also triggered an investment boom in central Kenya. Areas close to Nairobi have witnessed significant changes in real estate. Since 2016, in Maai Mahiu or Suswa, for instance, where new facilities like stations and depots are located, land value has increased three-fold. Here the construction of hotels, budget accommodation for truck drivers, and housing for other workers has increased to cash in on the emerging transportation economy.

Other regions of the country, such as Mombasa, historically neglected by the central government, are experiencing a decline in business opportunities. The old port’s customs clearing facilities are being shipped to the new Inland Container Depot close to Nairobi. With it, smaller scale business operations, whether in freight handling services, commerce, or hospitality, are also leaving Mombasa.

As a result, many local business people in my study describe Mombasa as a “dying city that will soon be a ghost town”. According to them, Mombasa was busy before the railway construction. It was common to get stuck in traffic for hours when large ships arrived. Now “it is emptier by the day, leaving young men idle, roaming the streets looking for work”.

The role of China

Besides funding the new railway, China also has a strong influence in the development of the project. China Road and Bridge Corporation, a Chinese state-owned company, was the main contractor.

To get quicker access to the areas allocated for the development, the corporation directly compensated individual households to vacate land. According to several company managers that I interviewed, the corporation paid US$10 million to meet the project delivery targets on time.

This directly undermines the work of Kenya’s National Land Commission that is mandated to regulate land compensation. Without direct supervision of an official state authority, some people have been able to negotiate better financial deals than others. As my interviews show, some lost out in the process.

Kenya’s government has been criticised by local civil society for ignoring regulations on project development and instead prioritising short-term stimulus effects over long-term social impacts.

The plan to extend the line from Naivasha to Malaba was put on hold in April 2019. The Exim Bank reversed its funding, citing the high number of court cases against the project. Other rail projects in the region, such as Tanzania’s, provide alternative options to connect East Africa’s interior with the Indian Ocean.

There is no indication when funding might be made available to extend Kenya railway farther inland. In the meantime, Kenya is paying through the teeth for the infrastructure project it once promoted as a “game changer”. It remains to be seen whether it will ever live up to the lofty promises.