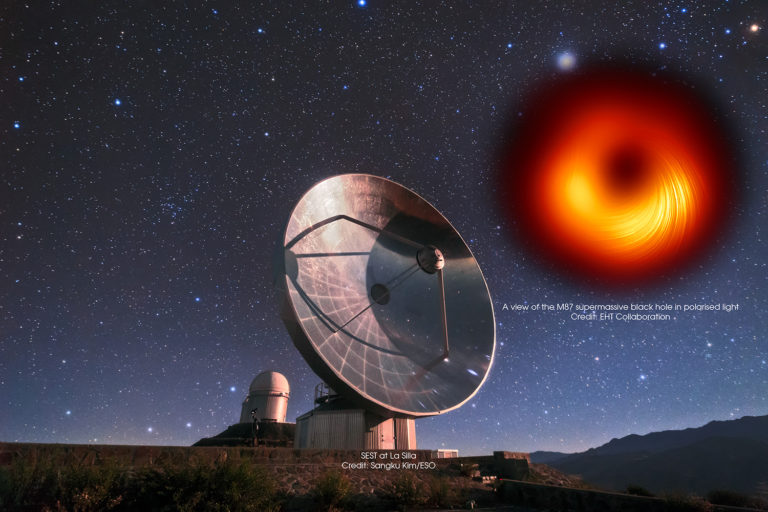 Thanks to Radboud University’s commitment of ten years of funding and support to the Africa Millimetre Telescope in partnership with UNAM, Namibia is poised to remain a significant location for space research.

This development has set in motion the start of the Africa Millimetre Telescope (AMT) project in Namibia – which aims to realise a radio telescope in the country. In addition, Radboud University guarantees a scientific and technical contribution to the Event Horizon Telescope consortium for the next ten years.

The first ever image of a black hole released in 2019 could only be taken using a global network of telescopes known as the Event Horizon Telescope (EHT). However, the addition of a telescope in Africa is necessary in order to improve future measurements and even create videos of black holes.

The AMT will be the first radio telescope in Africa that is sensitive to millimetre wavelength radiation. It is part of a large collaborative project between Radboud University, the University of Namibia (UNAM) and various international partners. The main goal of the project is to expand the telescope network of the Event Horizon Telescope with a radio telescope in Namibia.

“The addition of the AMT to the EHT network, will increase the number of connections between the telescopes, thus allowing for better images and videos to be taken of the black hole at the centre of our galaxy. This will enable us to further test our theories on black holes and understand how they generate gigantic amounts of energy”, says Prof. Heino Falcke, Principal Investigator (PI) of the project, who initiated it together with UNAM’s Prof. Michael Backes.

The AMT will also work as a stand-alone telescope – the only one of its kind in all of Africa. The telescope can monitor variations in brightness of small and large black holes, which it will also do in collaboration with optical telescopes and gamma‑ray telescopes such as H.E.S.S. in Namibia and the planned CTA in Chile.

“We can understand astrophysical objects such as black holes best, when we observe them at the same time with different types of telescopes. Hence, the proximity of H.E.S.S. and the AMT is ideally suited to study the Universe, even more so, considering also the close-by telescopes in South Africa: SALT in the optical and MeerKAT in the radio regime,” says Backes, Co-PI of the AMT and Namibia’s group leader for H.E.S.S.

The telescope, which will have a diameter of 15 metres, will be built according to a tried-out design and will be equipped with latest generation instruments. Similar telescopes have already been realised at the European Southern Observatory (ESO) in Chile and at the Institut de Radioastronomie Millimétrique (IRAM) on the Plateau de Bure in the French Alps. The AMT shall be powered in a sustainable manner, by using solar power, wind energy and possibly hydrogen.

Radboud University will guarantee 1 million euros per year to be used for the management and utilisation of the telescope, and participation in the Event Horizon Telescope. The guarantee is granted for the coming ten years. The money will be disbursed in phases, based on the project’s progress as well as to raising external funds and means. In addition, Radboud University guarantees an investment of 1.9 million euros for the realisation of the telescope itself. The guarantee of Radboud University sets a good foundation for the applications for further grants and investments.

Han van Krieken, Rector Magnificus of Radboud University: “This concerns appealing fundamental research that can only be carried out with large investments and long-term international collaboration. Radboud University researchers can keep contributing to this project over the following years and remain in a leading role.”

Namibia
The University of Namibia, together with local partners, are equally responsible for the realisation and the management of the telescope. This opens unique opportunities for astronomy in Namibia to conduct its own research and strengthen its position in science.

In order to prepare the next generation of Namibians for the AMT, the project has its own education and outreach programme, co-lead by UNAM’s Dr Eli Kasai, which has an active collaboration with partners from the local industry. For example, the first Namibian PhD candidate in the AMT Fellowship Programme will start in January 2022, and it is envisioned that from the summer of 2022 on, they will travel around Namibia visiting primary schools with a mobile planetarium.

UNAM Vice-Chancellor, Prof. Kenneth Matengu, remarked: “In many African communities, space is of symbolic significance. The AMT will function as a lighthouse project for the next generation of Namibian engineers and scientists in general. In particular, it provides UNAM with the unique opportunity to participate in progressive and international projects that can help science reach new heights. I look forward to exciting times.”

The Radboud Radio Lab will carry out the technical side of the project, supported by UNAM’s School of Engineering. Managing Director Marc Klein Wolt: “With this unique support from Radboud University, the realisation of the AMT telescope five years from now is becoming a reality. The AMT is excellent science in Namibia and with Namibia. We are truly grateful for the great collaboration with the country.”

International collaboration
The AMT project is a paragon of international collaboration: partners like Rössing Foundation, Walvis Bay Corridor Group, and KLM already signed support statements in 2019. The research programme for AMT is being prepared by scientists from the University of Amsterdam, MIT, ESO, Oxford University, University of Turku, the Joint Institute for VLBI-ERIC (JIVE), UNAM, and others. There are also ongoing negotiations with additional parties regarding their participation in the project.

Within the EHT, Radboud University already collaborates with the European stakeholders such as the Max Planck Gesellschaft, Goethe Universität Frankfurt, and the Institut de Radioastronomie Millimétrique.

Huib Jan van Langevelde, director of the EHT (JIVE Dwingeloo / Leiden University), is enthusiastic about the Radboud University’s guarantee. He endorses the importance of the support for the AMT project: “The AMT is an essential expansion from Europe to the global network and an important step towards improving the future of science by way of the Event Horizon Telescope.”