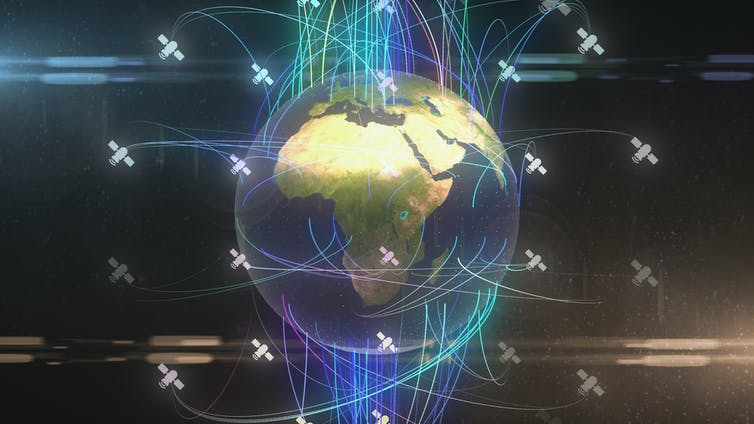 South African space science had a big day on 13 January 2022. The Cape Peninsula University of Technology, based in Cape Town, launched its third satellite mission into space from the Cape Canaveral rocket launch site in Florida in the US.

The nanosatellite constellation – consisting of three satellites – is called MDASat (Marine Domain Awareness). A nanosatellite is smaller than standard satellites, weighing between 1kg and 10kg; it’s an affordable, functional option. The mean mass of each of our satellites is 2.1kg.

MDASat is designed to collect data that will enhance the security and protection of South African marine resources. The constellation will detect, monitor and identify foreign vessels within the country’s exclusive economic zone. This could help track illegal dumping and fishing.

Our hope, as the team that developed and designed the constellation – I am the acting chief engineer on the project – is that MDASat will enhance the country’s ocean sovereignty and protect our marine resources.

This mission follows on from the successful development, launch and operation of two other nanosatellites: ZACUBE-1, known as TshepisoSat, and ZACUBE-2’s.

It’s an exciting moment not just for the institution and for South Africa, but for the African continent more broadly: this is the first constellation of satellites developed and designed in Africa.

Other African countries, among them Kenya, Morocco, Nigeria and Ghana, have sent satellites into space. But these were not developed and designed on the continent; they involved partnerships with non-African nations or companies.

This is important because the more countries and scientists are involved in space the better: this provides better collaborations and presents new technical techniques to process information. Different data can be used for all sorts of purposes, like tracking space weather and monitoring natural and marine resources.

The January 13 launch sent three satellites of the MDA constellation (we hope to launch nine in total as part of this constellation) into space. MDASat-1 will use Automatic Identification System data to monitor ships’ movements within South Africa’s exclusive economic zone.

Automatic Identification System is a radio system used for the tracking of maritime traffic. The location messages received by the satellites from ships in the ocean beneath is downloaded daily from the satellite when it passes over the ground station at the university’s Bellville, Cape Town campus.

The satellites can do a number of things. For instance, they can receive over the air upgrades, meaning software can be developed and uploaded to the orbiting satellite when ready. They can also collect raw data, enhancing the opportunity for diagnostic testing on signal interference and decoding messages.

This information allows us to track the satellites’ health status – if they experience software bugs or electronic malfunctions we can study that information, then apply fixes or backup manoeuvres.

MDASat also has an enhanced data interface. This means it uses the entire available bandwidth so it’s operating optimally and can put through maximum data.

These enhancements pave the way for the future MDASat-2’s development and launch. They also minimise the risk of damage to the current payload from space weather conditions.

Each satellite will initially pass the ground station an average of four times a day, but that will steadily increase. The satellites will drift apart over time and, as they eventually spread further apart, we will have an average of 12 passes per day. We expect an average of 1883k bytes of data to be generated per pass per satellite.

At the same time we are also still tracking the previously launched ZACUBE-2. It is also tracking ships, as well as forest and vegetation fires. Since its launch in 2018, ZACube-2 has provided cutting-edge very high frequency data exchange communication systems to the country’s maritime industry, as a contribution to Operation Phakisa. This government initiative aims to fast track several priority projects.

Space engineering projects started at the Cape Peninsula University of Technology in 2008. Today these are coordinated by the institution’s African Space Innovation Centre.

We work from laboratories near the institution’s Bellville campus. Our satellites are built to last and to stay the course: they undergo a rigorous flight acceptance review that confirms not only that they’re fit to go into space but that they’ll work once they get there. The review includes environmental testing to ensure mechanical shocks don’t obliterate satellite and thermal testing to ensure they can operate within designated temperature ranges.

There was another South African element to the 13 January launch: MDASat was launched by SpaceX, the company founded by SA-born entrepreneur Elon Musk. SpaceX provides affordable ride share options into space and MDASat was just one project launched aboard the aerospace company’s Falcon 9 rocket on this occasion. The rocket carried a total of 105 spacecraft which will all gather data for different entities.

This project represents a big step towards autonomy of South Africa’s precious natural resources: data from and about the country, for its own use.