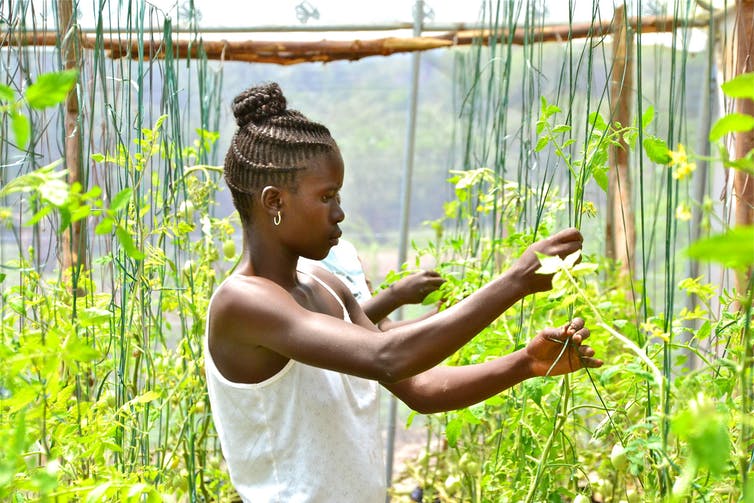 As an agricultural and environmental scientist, I’ve worked for decades exploring the practical challenges that smallholder farmers encounter in East Africa. These include controlling weeds that can choke their crops and looking for new ways to deal with pests or diseases that threaten their harvests.

I focus on smallholder agriculture because most of the food in the region is generated by farms that are only a few acres or hectares in size. And, while African economies are diversifying, most Africans still depend on crops and livestock production for income.

Across the region there is a strong link between fighting hunger, poverty and improving productivity and incomes on smallholder farms. But we must be careful to avoid pursuing solutions that damage the broader ecosystem.

In my research, I have explored how farmer innovations and local knowledge can contribute to maintaining crop varieties, livestock, pollinators, soil micro-organisms and other variables essential for a sustainable agriculture system. What scientists call agriculture biodiversity or agrobiodiversity.

My work puts me firmly on the side of people who today advocate for an approach to food production that’s called “agroecology” or “environmental conservation.” This means a focus on farming methods that protect natural resources and vulnerable ecosystems while respecting local knowledge and customs.

At the same time, however, in certain contexts I do support approaches that are viewed as “wrong” to many contemporary advocates of agroecology. These include the use of certified, commercial seeds for improved crop varieties, fertilisers, and genetically modified crops.

Opposition by agroecologists is rooted in a mix of concerns. With certified seeds, there is wariness about the cost to farmers and the impact on the common practice of saving seeds from one season to the next. For fertilisers, the focus is on run-off caused by their excessive use in places like North America and Europe. Opposition to genetically modified crops involves unease with using genes from unrelated species to improve crops. In addition to this is the potentially higher price of modified varieties.

While this may seem contradictory to some, I know that agroecology and advanced farming practices can co-exist in Africa. Indeed, to ensure African farmers and food markets can thrive while protecting local ecosystems – especially as climate change presents a host of new food-related challenges —- they must co-exist.

In my view, supporters of agroecology who strongly oppose new inventions are sincere in their beliefs that they are advocating for the interests of Africa’s farmers and the preservation of vulnerable ecosystems. Unfortunately, if successful, such hardline positions will narrow the options available in ways that will be harmful to both.

Weighing up the options

The three issues that appear to be most contentious for certain advocates of agroecology: fertilisers, commercially produce improved seeds and genetically modified crops.

Let’s start with synthetic fertilisers. The main concerns with fertilisers are related to their misguided and excessive application. In some places, this has contributed to the degradation of freshwater and saltwater ecosystems. However, rather than an absolute ban on using them, I prefer strategies that consider their safe and, modest use.

There are many situations on African farms today where modest amounts of synthetic fertilisers – applied in combination with other sustainable soil management strategies, such as crop rotation and intercropping – will do more to restore degraded landscapes than cow or sheep manure alone.

Some agroecology advocates also firmly oppose commercial seeds in favour of those saved by farmers from season to season. There are concerns about the cost of new seeds to farmers and also that crop diversity will narrow as varieties, that farmers have planted for generations, will be lost.

Again, I look for evidence of outcomes, as do most farmers I encounter. Overall, the farmers I’ve worked with in Africa are radically practical and carefully evaluate their options. They will purchase a commercial seed if they see clear evidence that it is worth the investment. For instance, that it provides superior yields, or other qualities, while retaining the flavour and texture they and their customers prefer. If not, they will use seeds saved from previous years.

Expanding their options with commercial seeds can empower farmers. It helps them make choices that can help to improve both household income and sustainably boost production to meet consumer demands. These outcomes align with agroecological principles.

For example, varieties of maize, cotton and cowpea are now being developed for, and increasingly cultivated by, African farmers. The genetically modified traits are used to help address pests and other stresses, including drought. These crops undergo extensive trials and national regulatory reviews to assess their safety and consider their release to farmers for use.

New varieties of genetically modified maize and cowpea that can fight off destructive crop pests are especially attractive. They contain traits acquired from a safe, naturally occurring soil bacteria called Bacillus thuringiensis or Bt. It has also been used for decades as an organic crop protection spray. Incorporating Bt traits directly into the crop itself reduces the need to treat fields with expensive and, in some instances, potentially toxic pesticides that may result in huge problems for people and the environment from inappropriate use. In this context, the genetically modified seeds —- if affordable – could be the optimal choice from an agroecological perspective.

Bt cowpea was recently approved in Nigeria and Bt maize is being evaluated as an option for fighting destruction caused by the recent arrival of fall armyworm pests on the continent. Bt cotton is already grown in several countries in Africa where it offers higher yields and reduces the need for pesticides.

However, farmers in Burkina Faso are no longer growing Bt cotton due to concerns about the quality of the fibres produced by the variety available to them, though not its pest-fighting properties. These quality concerns point to the need to support local breeding efforts, as Nigeria is now doing with its Bt cotton varieties, as opposed to rejecting the technology itself.

The difficult issues around Bt cotton production in Burkina Faso are evidence that there are no perfect solutions.

But we know the results of a lack of choices – where African farmers plant only the seeds from varieties they have been cultivating for decades and have limited options for maintain soil health and dealing with crop pests. It has contributed to a situation where crop yields have stagnated, lands are degraded of basic nutrients, consumers’ demands must be met with costly food imports. Those who depend on agriculture suffer high rates of poverty and hunger.

We also know from the experience of farmers in other countries about the pitfalls of an over-reliance on a small range of commercially produced crop varieties and unchecked use of fertilisers and pesticides.

But we will not overcome these challenges by narrowing the options for addressing them. Instead, we should be open to a wider range of practices and innovations.

For me that means embracing the core focus of agroecology – supporting environmentally sustainable food production that benefits local farmers, consumers and ecosystems – while avoiding the wholesale rejection of certain technologies that, in the right context, can be instrumental to achieving this critical goal.