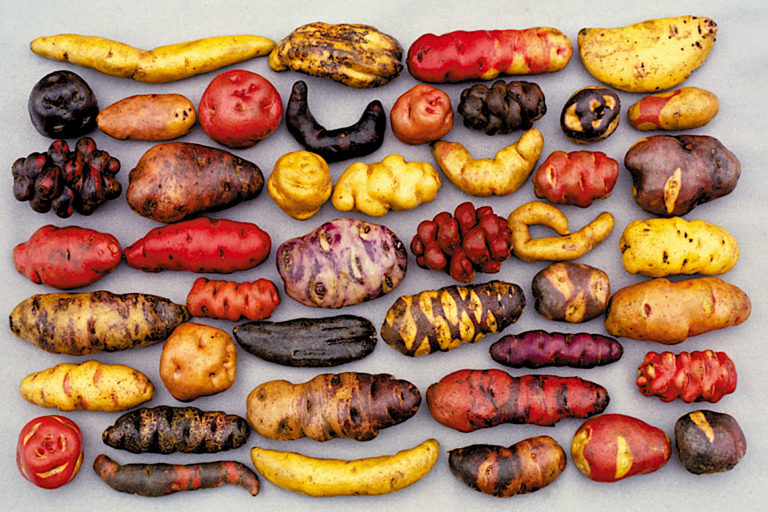 Two of the world’s most ubiquitous and important crops have a 7,000-year-old backstory, which can be traced to the Andes in South America, where maize and potatoes have long been cultivated for food.

And still today – despite a growing reliance around the world on just five staple crops – this remote mountain region is so replete with diverse cereals, roots and pulses that it is regularly the origin of the next global “super food,” whether that’s quinoa, maca or amaranth.

But in terms of potential dietary diversity, the latest food booms and busts are just a fraction of what the Andes has to offer – for people, planet and prosperity. Not only is this corner of the Global South a rich source of many different food crops, but within these crops are hundreds of different ancestral varieties, most of which have as yet untapped potential for nutrition, livelihoods and biodiversity.

Underexploited crops in all their forms continue to thrive in the vast Andean ecosystem, which has more microclimates than anywhere else in the world, playing a unique nutritional and environmental role. As a result, it is the natural place to turn to identify “future foods” that can cope with the rapidly changing conditions of a heating world.

In particular, the Andes offers valuable lessons from its recent experience of the quinoa boom, which sidelined many smallholder farmers and incentivized rapid expansion of just a few commercial sweet varieties. Soaring demand led to a reduction in the traditional long fallow periods between harvests that allowed the land to recover and jeopardized soil health as well as domestic food security.

However, investing in research and partnerships that support “future foods” can potentially bring positive economic impacts to the households that cultivate, protect, and transform crop biodiversity while also improving nutrition and protecting nature.

To begin with, investment in science and innovation can help develop stable and sustainable markets for a greater range of crop varieties that suit different geographies or nutritional needs. The promotion of only one type of quinoa or maca, for example, might be commercially efficient but it endorses the kind of monoculture that creates a vicious cycle of soil degradation and increased fertilizer dependency.

Instead, science-based market differentiation would support smallholders to grow the crops and varieties best suited to their region, climate and dietary needs, which in turn would provide a more consistent food supply, higher incomes for farmers and sellers, and better nutrition.

Every crop variety has distinct nutritional and environmental advantages, which can also be combined and compounded. Some of Peru’s 3,000 varieties of potato contain more than four times as much iron and five times as much vitamin C as others, for example. Meanwhile, other roots and tubers like arracacha and yacon, which grow at lower altitudes, are useful in mixed-species fields, contributing to higher levels of dietary diversity.

With more research and evidence, scientists can help make the case for growing a range of different varieties. A recent study found that each additional crop grown by smallholders increased the chances of a basic diverse diet by 17% among women of childbearing age in the Huánuco region of Peru, indicating a positivelink between crop diversity and improved dietary quality.

The second benefit of greater investment in agrobiodiversity research would be the ability to balance promotion of different crops across external and domestic markets.

Unfortunately, the maca and quinoa booms were characterized by a heavy focus on foreign demand and export, rather than national opportunities, leading to poor-quality produce that stifled domestic trust and devalued the crops.

While some cultivated species, like amaranth grain and tarwi beans, have tremendous potential to be used more widely, either as health foods or for their contribution to the protein transition, the undomesticated species are generally prone to overexploitation.

Some of them are part of traditional food systems, and are not yet sufficiently abundant and protected for wider use outside the communities where they grow. Therefore, a basic principle for all species is that their promotion, commercialization and use should adhere to the principles of sustainability and regeneration, which includes protecting genetic crop material.

Finally, governments need to support the protection and branding of Andean “future foods” which includes greater recognition for the smallholder farmers who are providing environmental services as stewards of traditional crops.

The Association of Potato Guardians (AGUAPAN), whose members collectively protect more than 1,000 ancestral varieties of potato, is one of only very few examples of tangible models and practices that compensate farmers and their communities.

By increasing the range of foods grown and eaten, it is possible to promote healthy diets while also adapting food systems to climate change, preserving genetic material, and minimizing the impact of agriculture on the environment.

So much of our global food heritage can be traced back to the Andes, a region that can also help secure our food future with future foods if we can learn the lessons of the past.