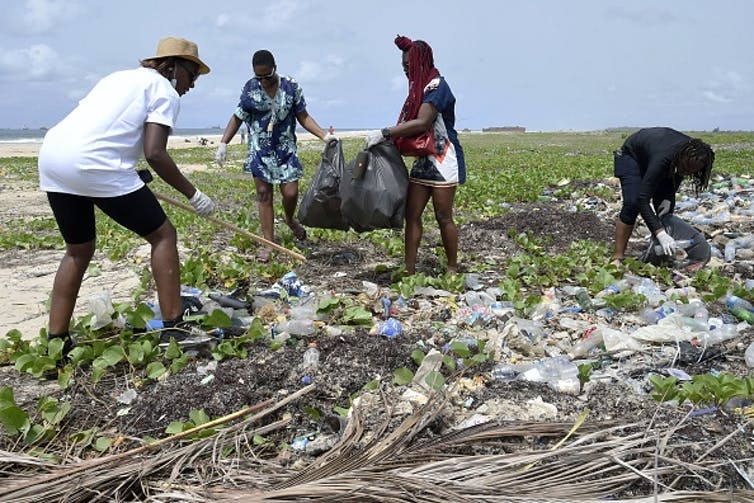 Plastic pollution is a prevalent issue across the globe. Countries in Africa are no exception. The state of plastic pollution in parts of Africa is dramatic as a result of weak policies and indiscriminate dumping of solid waste.

In 2015, five African countries (Egypt, Nigeria, South Africa, Algeria and Morocco) are listed among the top 20 nations with the highest mismanaged plastic waste. Each generates between 0.31 and 0.97 million tonnes per year. While the first and last position held by China and the US generates an estimated 8.82 and 0.28 million tonnes per year, respectively.

More recent scenarios have suggested that due to end-user demand for plastic products on the continent, by 2060 eight African countries will be in the top 10 nations with the highest plastic waste generation rates.

Overall, this results in large volumes of waste ending up in open and uncontrolled dump-sites. Eighteen of the 50 largest dump-sites are located on the continent. For example, Agbogbloshie Recycling Site in Accra, Ghana. It is situated along the Odaw River and has received between 1.75 and 2.5 million tonnes of e-waste in a 13-year period. This loosely equates to between 292,000 and 417,000 male African elephants.

Mismanaged waste has a high probability of entering the surrounding environment, with peak concentrations mostly associated with urban centres. Rivers may be particularly vulnerable to contamination due to their close proximity to multiple sources. They are also considered important pathways for waste to enter other environments.

Urban rivers in south-east Asia and West Africa have been flagged as major pathways for plastics to enter the marine environment. But data used for the report are largely based on studies outside the continent. Considering the social and economic importance of the 63 transboundary river basins – which currently support 77% of the continent’s population – it is essential we are able to accurately access the severity of this issue in Africa.

As my research colleagues and I point out in our paper there’s a big gap in our understanding of environmental micro(nano)plastic pollution on the continent. This is because studies are performed predominantly by – and in – wealthier countries.

We argue for the development of Pan-African research networks and analytical nodes. These would support intra-African research exchange and training. They would also drive evidence-based policy relevant to an African context. This would facilitate more inclusive conversations around the harmonisation and standardisation of methods typically more accessible to the Global North.

Research into the impact of plastic pollution is still in its infancy. Nevertheless it’s been shown to have negative effects on a wide range of animal and plant life. Once in the environment larger plastic items can breakdown into smaller micro (<5 mm) and nano-sized (1-100 nm) particles. These sizes are near impossible to remove. So, clean-up efforts are unlikely. This leaves us with a legacy pollutant of unknown consequences.

Understanding micro- and nanoplastics as pollutants requires advanced equipment and skills. But equipment capable of characterising plastic particles (smaller than 500 microns) into their polymeric groups (e.g. polyethylene, polypropylene) is largely unavailable in most African countries.

This is one of the reasons for the paucity of data on microplastic pollution from Africa. For instance, only 13 out of 54 countries were represented in a 2020 review.

Access to analytical equipment is not a challenge faced only by researchers in Africa. It, however, may have disproportionately larger effects.

Most researchers require collaborators from laboratories in wealthier countries (often outside Africa) to meet reporting and publishing guidelines. Funded exchange programs have provided some researchers with the opportunity to visit well-equipped microplastic laboratories across the globe. But African researchers are limited in their ability to transfer their newly gained skills because they lack the required analytical facilities back home.

Overall, this weakens Africa’s ability to gather comparable long-term data. This is needed for monitoring, risk assessment and the successful implementation of intervention strategies. We agree that investing in sustainable and smart waste management strategies are key. But failure to improve monitoring capabilities for the smaller plastic particles will leave Africa in a serious blind spot.

We therefore propose African governments and international funding partners focus on building collaborative laboratories in different regions. These would support research that will provide data needed for plastic waste and pollution management.

In 2020, four researchers from Nigeria, Ghana and South Africa established a Pan-African network of micro and nano plastic researchers. Modelled on similar networks in the UK and Germany the initial aim was to encourage the sharing of facilities and expertise across national boundaries.

The network now has around 200 members from 25 countries. The African countries represented are Algeria, Benin, Egypt, Ghana, Kenya, Nigeria, South Africa, Tanzania, Tunisia, Zambia and Zimbabwe. The network organises and promotes events that allow researchers to network on a regular basis to enhance collaborative efforts across the continent.

The experts hope to attract support both from African governments and international funding partners to establish fully equipped laboratory “hubs” that meet international requirements. These “hubs” could then become the epicentre for researchers. They could visit them to perform various steps along the analysis pipeline, access training workshops and discuss innovative ways for future research.

A central database of experts and equipment would also assist researchers find collaborative partners with complementary skills and infrastructure.

These first steps would help drive evidence-based recommendations relevant to the African context. It could also facilitate Africa’s inclusion in conversations on harmonisation and standardisation of analytical methods now solely dictated by wealthier countries.