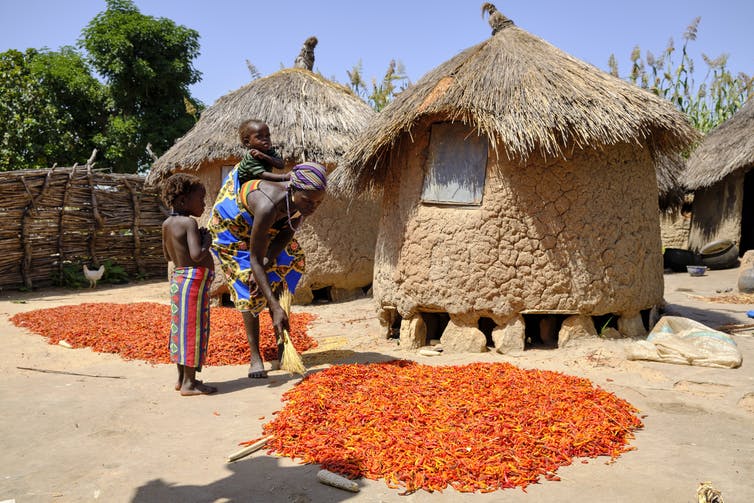 Agriculture is an important part of development and poverty mitigation in low income countries. It depends on infrastructure such as good roads, safe drinking water, adequate power supply, a market network, modern communication services and facilities for processing and storing farm harvests.

But inadequate and unreliable infrastructure services are common in rural communities in Africa. Nigeria is no different. Its rural population faces a range of difficulties that hinder agricultural productivity. They include environmental hazards, technological constraints, rising production costs, inadequate agricultural incentives and lack of sustainable rural development programmes.

To show how various factors affect farming in Nigeria, we had a closer look at some rural communities in Ogun State.

What did we do?

In this study, we interviewed 160 farming households from 20 communities in Ogun State. The study locations were the state’s major food crop producing zones, where cassava, maize, fruit and vegetables are grown. They contribute significantly to the local economy as well as the Nigerian food system. We focused on the state of rural infrastructure, level of development in the selected villages and how infrastructure affects the production efficiency of food crop farmers.

We found that the main livelihood for rural people in the area was subsistence farming, but more than half of the food crop farmers also engaged in trading. This suggests that the majority of these households were experiencing constraints in their farming activities and needed additional income sources.

We looked at which inputs made the most difference to efficient production of food crops: labour, capital or the state of infrastructure. The last of these included how close the farm was to market and storage centres, tarred roads, health centres and potable water.

Most of the participants were male, with a high school certificate. The average age was 48 and their farming experience was about 19 years. Participants mostly use family labour on their farm. Literature has confirmed that labour and capital make a difference to rural household incomes and farm competitiveness.

The participants indicated that the majority of the roads linking their farms to the city were in a state of disrepair. Health centres were no longer functioning due to poor funding by government and inadequate medical personnel. Potable water, electricity supply and storage facilities were also identified as inadequate. And most of the smallholder farmers said they didn’t receive adequate agricultural extension services.

We used an Infrastructure Index Estimation to gauge the level of development of the study area. It allowed us to group the communities within the area according to development level. The index was based on the cost of transport to get to each type of infrastructure (school, storage, health centre, potable water, market, tarred road and processing facilities). The study used the standard indicators of infrastructural development. Out of the 20 communities sampled, 12 were found to be developed while eight were less developed.

The study further compared the return on farm investment by farmers in these communities. We found that farming was more profitable in developed communities than in the less developed communities. Farming output is a function of area of land cultivated, family labour, planting materials, distance to tarred road, distance to market, distance to agro-chemical centres, storage facilities and assess to extension personnel. But the main contributor to efficient crop production was the availability of infrastructure.

The findings suggest what Nigeria can do to increase food production and farm profitability.

Effective extension and rural advisory services are needed to improve farming skills and techniques. But other studies have confirmed that smallholders’ readiness and ability to accept innovations in agricultural production depends largely on infrastructural facilities and market structures.

Therefore the government, NGOs and the private sector should repair and rehabilitate rural infrastructure.