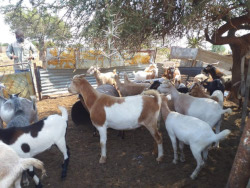 According to a study involving 183 goat keepers, communal farmers in Limpopo Province have significantly reduced their goat breeding practices, citing the repercussion of socio-economic impact

Goat breeding practices in South Africa are comparatively low at 1% in the world’s listings and only account for 3% in the African continent. In South Africa, Eastern Cape Province has more goats sitting at 38%, followed by Limpopo 17%, Kwazulu-Natal 13%, and North West at 12%.

The scope of the study, led by Dr Louis Tyasi, Prof Jones Ng’ambi and Stanley Mogashoa focused on Limpopo Province, where they discovered that limited knowledge of genetic improvement was the main cause of dwindling goat breeding practices among communal farmers in Limpopo Province.

“The process of breeding requires a bottom-up approach where livestock specialists assist farmers to identify and understand their production challenges before designing an improvement program,” explained Dr Tyasi, who is a senior lecturer and researcher in the Department of Agricultural Economics and Animal Production at UL.

The study, titled “Breeding practices and trait preferences of goat keepers at Lepelle-Nkumpi Local Municipality, South Africa: Implications for the design of Breeding Programmes,” aims to detect breeding practices and trait preferences by farmers to determine their relevance in establishing a Community Based Breeding Programme (CBBP).

The paper also focused on breeding trait preferences by livestock keepers for the selection of breeding animals to be parents of the next generations. According to the study, the most common traits preferred by goat keepers among the surveyed villages were their twinning ability, mothering ability, and body size in breeding, while in breeding bucks it was mating ability, growth rate, and body size.

According to Tyasi, this limitation led to South Africa having approximately 6 million goats under communal farming, and this became a barrier for communal farmers to participate in commercial farming.

Another observation in the study is that goats under communal farmers are kept for manure, conducting traditional ceremonies, skin, milk, meat, and bush encroachment control, whereas commercial farmers keep Red Kalahari, Savannah, and Boer goats for meat production, Saanen and Toggenburg goats for milk production, and Angora goats for mohair production.

Prof Ng’ambi, co-researcher and lecturer at the Department of Agricultural Economics and Animal Production at UL, said results from this study are useful for designing CBBPs for goat production in the communal areas of Lepelle-Nkumpi Local Municipality to improve livestock breeding. Stanley Mogashoa, Agricultural Advisor at the Lepelle Nkumpi Local Municipality, acted as co-researcher in the study.