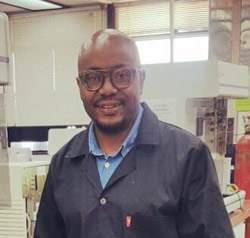 A Senior Lecturer in Chemistry at the University of Limpopo, Dr Mulisa Maumela believes that investing in biomass energy  (renewable energy from plants and animal) can help sustain the country’s petroleum industry as it provides low-cost biofuels while saving the environment

Through his research project themed the “Conversion of Biomass Material into Biofuels”, Dr Maumela says there are prospects of finding an alternative, cheaper, sustainable, environmentally friendly methods for the production of transportation fuels and other important chemicals such as fuel additives.

Biomass is renewable organic material that comes from plants and animals and its use for transportation and electricity generation is increasing in many developed countries as a means of avoiding carbon dioxide emissions from fossil fuel use. According to Dr Maumela, conversion of biomass material into biofuels is the process in which organic compounds like Levulinic Acid (LA) are extracted from biomass materials such as grass, nutshells, and wood via the hydrolysis process in the presence of an acidic catalyst (H2SO4).

He underpins that the extracted compound, which is Levulinic Acid, can be converted via a hydrogenation process in the presence of a catalyst (such as ruthenium, platinum or palladium and a solvent (H2O or dioxane) to an organic compound called Gamma-Valero-lactone (GVL). “Gamma-Valero-lactone compound can further be catalytically hydrogenated to produce liquid alkenes having similar chemical properties as those found in transportation fuels.

“These newly developed methods for the production of biomass-derived fuels will help the community to start perceiving biomass materials as very useful materials instead of treating them as just waste materials of no important use in our daily lives,” he maintains.

He adds that the use of biomass-derived fuels will help in reducing health problems associated with carbon emissions to the environment reiterating that there is a need to create awareness to the science community and the general public on the great potential that biomass materials possess in improving livelihoods.

Dr Maumela says the need for exploring the biomass is informed by the fact that crude oil/coal currently the main sources of fuels produced globally can deplete over time because these fossil fuels are not renewable. “An alternative renewable source for the production of greener fuel has to be identified for the future,” he determines.

His review article was selected to feature under the special issue of “New Trends in the Use of Catalysts for Biofuel and Bioproduct Generation” and early this year was published in a peer-reviewed international chemistry journal – Catalysts, journal (impact factor: 3.5).

Before joining UL in 2019,  Dr Maumela was a Postdoctoral Research Fellow at the University of Johannesburg (UJ) from 2017 to 2019.

UP Entrepreneurial Challenge to Encourage Growth Of Start-ups Across Africa