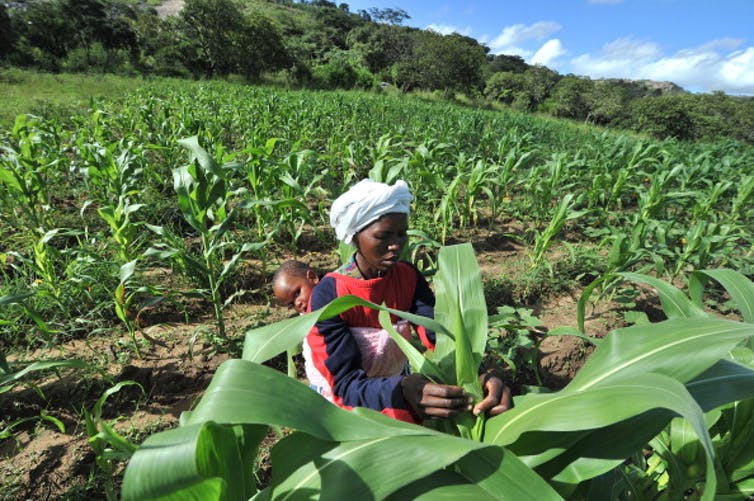 Right now, countries in the Horn of Africa are in the midst of a multi-season drought. There have also been years in which the rains have come with such force that floods wash out the season’s labour, sometimes along with homes, as happened in Mozambique just two years ago.

Climate change is making these disasters more common. It is hard for rural families whose livelihoods depend on the food they can grow. A 2015 study by the World Bank estimated that climate change over the next 20 years would increase the number of desperately poor people by 122 million, if nothing was done about it.

While the drivers of deep-seated poverty in rural Africa are many and complex, climate shocks are one of the most important.

Research I’ve done with colleagues in the past has shown how climate shocks affected rural households in Ethiopia and Honduras. We found that acute shocks – a devastating hurricane or prolonged drought – could push households into chronic poverty and hardship.

Not only can climate shocks push families into poverty, it can also keep them there. The dreaded anticipation of shocks, or risk, discourages investments that could otherwise raise families’ living standards and reduce their vulnerability to poverty.

From the Sahel to Central America, small-farm households keep their modest savings in the form of food stocks. While understandable, indeed optimal given the constraints they face, this behaviour closes the vicious circle of shocks, risk and poverty.

But there may be a way to reset this relationship between risk, shocks and poverty. An emerging body of evidence reveals that new risk management tools that make households resilient to shocks further empower them to invest more in available technologies and economic opportunities.

My recent work in Mozambique and Tanzania , with colleagues (more on this later), adds to this evidence, showing what farmers can achieve by combining these tools.

Tools and their limitations

One of these risk management tools is agricultural index insurance. It provides payments in the event of crop losses, so a household doesn’t lose everything in a bad year. Experiments with index insurance have shown that when protected, farmers increase investment in their farms by as much as 30%, and reap matching increases in income.

I was involved in what has been one of the most successful index insurance interventions to date. In a 2010 collaboration, researchers from the International Livestock Research Institute, the University of Wisconsin and Cornell University launched a scheme like this for pastoralist households in northern Kenya. In 2015, it was adopted by the Government of Kenya and paid out over US$10 million to vulnerable pastoralists in the first five years.

Emerging evidence also shows that genetically encoded risk management technologies can achieve some of the same benefits as financial instruments. They include stress-tolerant crop varieties.

Both types of resilience-building technologies – financial and agronomic – have shown considerable promise but also have limitations. Insurance can be an expensive way to manage risk. It also brings costs each year whether or not insurance pays out.

An improved seed variety has no such continuing costs. Beyond the initial, substantial cost of developing the new variety, the seeds can be reproduced and purchased for little more than any other seed variety. But the seeds only protect farmers against specific peril (limited flooding or a specific type of drought). Beyond this they provide little or no protection.

These observations suggested to us that bundling different risk management technologies might be the way to unshackle Africa’s small-scale farmers from the vicious circle of shocks, risk and poverty.

In Mozambique and Tanzania, my colleagues and I conducted a four-year randomised control trial that combined index insurance and stress-tolerant maize to exploit the synergies of both together. The insurance expanded the protection that the seeds gave. The seeds’ tolerance of some drought reduced the cost of the insurance. It would also provide higher yields than other varieties even in normal years.

We designed the bundle so that in a severe drought, seeds would be replaced and farmers would be able to plant again in the next season with the same stress-tolerant seeds.

The project had a surprising result: farmers who experienced the steepest losses to drought grew a bigger harvest than they ever had before in the year immediately after.

When we analysed the data, we found that insured farmers could not only feed their families following a drought, they also increased the amount of improved maize seed they purchased. In fact, they invested more improved seed than they ever had before. Those additional purchases drove the increase in yields in the following year as farmers became convinced that the technologies worked, enabling them to deepen their investment and increase their incomes.

A new ending to the same old story

These and many other field trials are building evidence that effective tools to manage risk can create a new ending to the same old story about shocks, risk and poverty. These tools not only protect current well-being and promote resilience, but can also provide a solid foundation for future improvements. Together, resilience to shocks and the resulting investments into growing more food build what we call Resilience+.

Accelerating climate change has made it especially urgent to create flexible bundles that improve resilience.

If tools are effective and provide value, farmers will use them to increase their agency to choose improved inputs, to expand or diversify their planting, or to try new and unfamiliar practices that may produce more food. We believe this approach could have a transformative impact where risk is primarily what holds families back from stronger livelihoods.