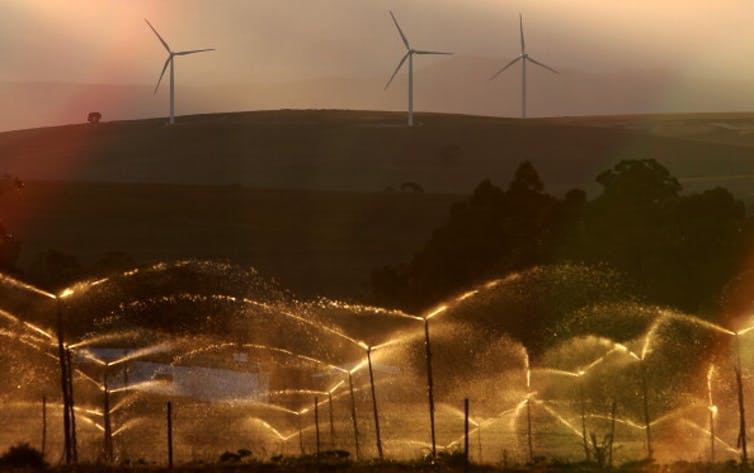 South Africa’s economy has taken a number of very heavy body blows recently. These include a slowdown due to measures taken to control the spread of COVID-19, on top of increased state dysfunctionality due to corruption. The country has also just experienced the worst riots since it became a democracy in 1994.

All have left it struggling financially, while investor confidence has been shaken.

The country’s president, Cyril Ramaphosa, and finance minister, Tito Mboweni, have put in place measures to try to soften some of the hardships caused by the pandemic, and more recently the arson and violence. But a host of additional adjustments need to be made – to economic plans as well as budgets.

One of these is the country’s power generation and electricity supply programmes.

Electricity demand projections are interlinked with economic progress. Changes in the economy therefore have a direct impact on the energy sector. In addition, energy generation technologies are evolving rapidly, affecting available technological choices and associated costs.

A reappraisal of the country’s long-term electricity requirements – and a review of technologies best suited under the circumstances – has therefore become a priority.

South Africa’s energy policy is managed through the Integrated Resource Plan. The document is prepared by a panel of experts and sets out the preferred evolution of the power generation landscape (additions, closures, technologies to be used) based on scenario planning. These plans are supposed to be reformulated every two years.

The most recent one was gazetted in 2019.

Since then there have been a number of significant developments in the sector.

The first revolves around technology, in particular electricity storage, a major enabler of wind and solar as sources of electricity generation. Renewables currently make up only 10.5% of electricity generation in South Africa. But there’s widespread recognition that this needs to be increased. The push factor is that the country needs to reduce its dependency on coal. The pull factor is that it has ample supplies of both wind and sun.

The cost of storage is a massive obstacle. Wind and solar can only function at specific times. The way round this is to store some of the electricity in batteries, to be released at times when the sun or wind aren’t available. At the moment building batteries large enough to see the grid through dozens of hours without wind or sun is both impractical and too expensive.

But batteries with more capacity are being developed with the use of hydrogen. Better and cheaper storage will make the intermittent renewable electricity generating technologies more viable and increasingly attractive.

The other reason the plan needs to be revised is that it would allow South Africa to settle the lingering confusion about possible future nuclear builds. The 2019 plan did not envisage any new nuclear developments until at least 2030. Despite this, and in the face of opposition from various quarters, the government has been encouraging the nuclear sector to engage in preparatory work leading to a new build.

In my view this option should be left out of any revised plan. The main reasons are South Africa’s national fiscal shortages – nuclear is very expensive – as well as the ongoing global decline in nuclear technology.

The other reason that the plan needs to be revised urgently is the changing patterns of demand.

A number of assumptions that were used to develop the integrated resource plan two years ago are no longer accurate.

One has been a drop in electricity demand from the power utility Eskom. This has been driven by slower economic activity as was evident during the COVID-19 lockdowns.

In addition, demand has been dampened by steep rises in electricity rates. Power cuts have also been a contributor to the drop in demand.

This trend is likely to continue as the move to solar generation accelerates. Mines have been keen to set up their own on-site solar plants and there has been significant growth in solar installations on domestic rooftops and in shopping malls and factories.

This will be given further wings by the fact that the government is changing the regulatory environment to make it easier for independent developers to set up power plants up to 100 megawatts.

While a quicker than imagined economic recovery is always possible, this would be accommodated in future electricity plan revisions. But even here caution is required. Economic growth only leads to slightly higher electricity demand – an increase that’s always been overestimated in the past.

Plugging the gaps in the interim

The national power utility Eskom has been unable to provide a steady power supply due to ageing infrastructure and an abnormally high number of breakdowns. This has led to periodic electricity blackouts at times when demand has exceeded supply.

To alleviate power shortages in the interim, the Ministry of Mining and Energy launched an initiative to solicit 2,000 MW of emergency power from private developers.

But the plans aren’t panning out very well.

Most of the capacity awarded under the programme was to a Turkish company that operates a fleet of ships with gas power stations on board. Three ships were to be moored off South Africa’s coast.

But the floating power stations have run into major difficulties related to environmental authorisation requirements. There are also court challenges.

The remainder of the interim plan was to be taken up by renewable energy based projects. But a new requirement in the plan for emergency power was that wind and solar plants must be able to deliver power continually from 5am until after 9pm. This means that renewable projects require supplementation when there is no sun or wind, making them expensive.

The most problematic aspect of the emergency power programme is that it will award 20 year contracts to successful bidders. So a short to medium term power shortfall is to be settled by long term contracts that will supply electricity at considerably higher cost than alternative sources.

The emergency power programmes were supposed to be operational by 2022. This deadline is clearly not going to be met.

South Africa needs a detailed and thoroughly researched set of scenarios mapped out to inform a new electricity plan.

These would weigh up the various options – from renewables through to nuclear, coal or gas plants.

They would also factor in the eventual completion of the three remaining much-delayed units at the Kusile coal plant. These will add 2,400 MW when they come on line in the next few years, corresponding to about 5% of the country’s electricity generating capacity.