To Save Chocolate’s Future, ‘Start Now and Go Big’ On Agroforestry (Commentary) 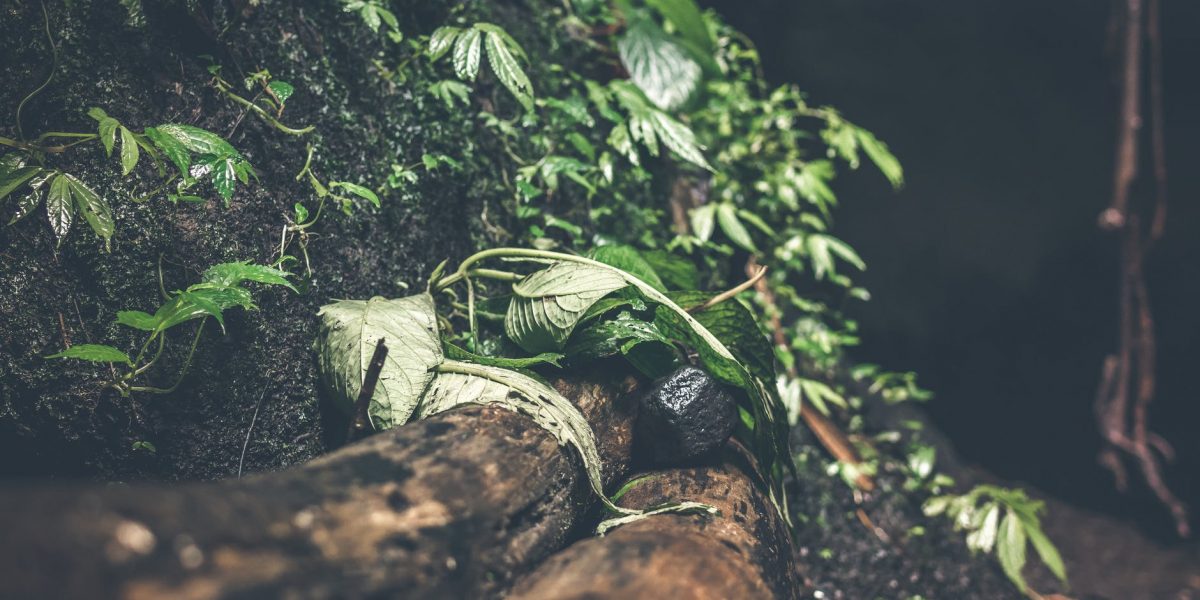 In May 2017, the NGO Mighty Earth revealed the destruction of government forest reserves in Côte d’Ivoire by cocoa cultivation: out of 234, only six were still relatively intact. Deforestation outside reserves, largely due to cocoa, was also severe: 94% of Côte d’Ivoire ’s humid tropical forest was gone.

Many had known what was happening. But the Mighty Earth report was a turning point after which the crisis could be openly spoken of.

Cocoa agroforestry had long been of interest. The industry knew that cocoa grew with other trees in Central America and in complex multi-strata agroforestry systems in Cameroon with up to 20 types of tree. In 2014 my organization World Agroforestry (ICRAF) interviewed 355 Ivorian cocoa farmers: an overwhelming majority (338) knew the benefits of growing it with other trees.

But there was always hesitancy. 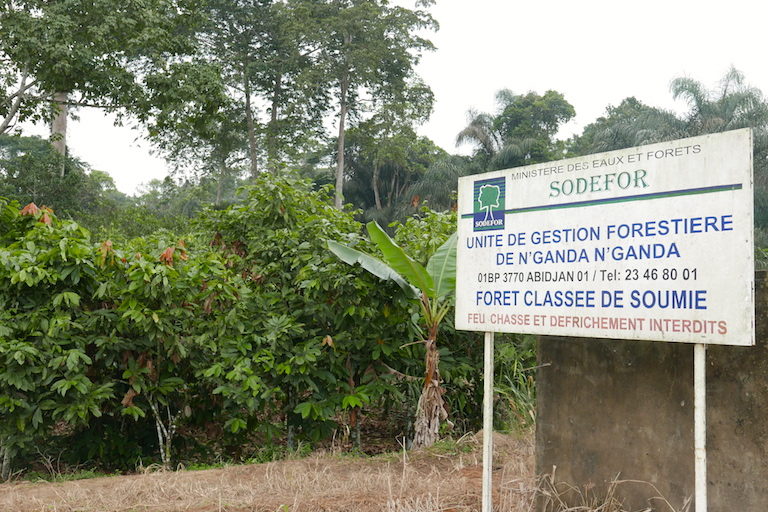 This forest reserve has been heavily encroached by cocoa cultivation (as seen in foreground here in 2017). The Ivorian government now intends to increase tree cover in such reserves with agroforestry. Photo courtesy of Cathy Watson/CIFOR-ICRAF.

The release of the Mighty Earth report changed this, however. There was no rush to solve the crisis. Deforestation did not stop. But there was a new openness. Cocoa agroforestry was no longer on the fringe.

Companies like Barry Callebaut and Mars Wrigley began trialing it, and in 2019, Côte d’Ivoire’s top cocoa body, Le Conseil du Café et Cacao (CCC) pronounced that it “could without doubt address the problems of climate change caused in part by the reduction of forest cover” and that the cocoa sector would be “required to address the ecological situation.”

Since then, actors have converged on cocoa agroforestry with increasing conviction. Today no one argues for full sun cocoa in West Africa, and a consensus prevails that cocoa agroforestry – along with zero deforestation of the remaining forest – is the way forward.

But what exactly is cocoa agroforestry and why is it so key?

The answers have not always been clear. Fortunately, resources have just come out that can help us to grasp this more nature compatible way of raising cocoa. Among them is a new electronic Cocoa Agroforestry Library from Mighty Earth and the Smithsonian Migratory Bird Center.

In its consultation paper for the 2020 Cocoa Barometer, Dutch NGO Tropenbos describes cocoa agroforestry as a practice able to bring a “wide range of benefits, including biodiversity conservation of flora and fauna, carbon sequestration, and stimulating rainfall.” 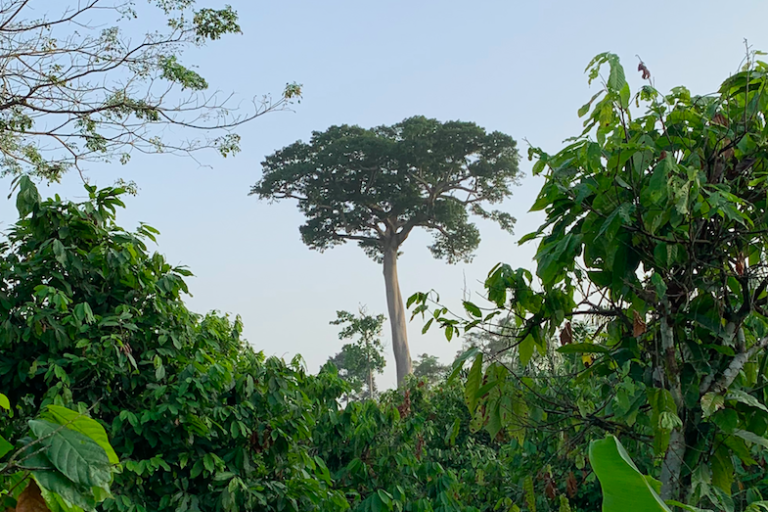 In its repository of cocoa agroforestry systems in March 2021, French NGO Nitidae calls it “a lever for the cocoa sector to regenerate degraded post-forest land and help plots with shading, pest management, and maintenance of soil fertility and microclimate.”

And in its 2021 Easter score card, Mighty Earth says cocoa agroforestry is “better for farmers’ food security and income diversification and a more ecologically-sound way of growing cocoa and restoring farming landscapes.’

It states too that if companies support farmers in their supply chains to transition to agroforestry, cocoa could even become “an agent of re-greening.”

Researchers on the ground agree: “Cocoa agroforestry is the intentional growing of other trees among cocoa trees to create a forest like effect,” says Dr Christophe Kouame, head of World Agroforestry ICRAF in West and Central Africa.

“It is vital because without it, Côte d’Ivoire and Ghana will not be able to continue to produce 60% of the world’s cocoa and will experience the full brunt of the climate and biodiversity crises and contribute to them,” says the agronomist turned agroforester.

He explains that in Côte d’Ivoire, where cocoa is produced usually by internal migrants or migrants from Mali and Burkina Faso, “farms were set up at the expense of forest. We relied on deforestation. We moved to monoculture full-sun cocoa in the 1970s because it maximized yields. But it is unsustainable. Farmers say, ‘Our trees die fast. They are burnt by sun. They suffer from wind, drought and disease.’ We need a new way.”

Kouame also says that worries about cocoa agroforestry have paled. Cocoa yields can remain high under agroforestry if done right, and far from increasing the devastation caused by the cocoa swollen shoot virus by introducing trees that harbor its mealybug vector, cocoa agroforestry can mitigate its severity,

Despite all these endorsements, however, a great gap looms. How to “do” cocoa agroforestry is not fleshed out, leaving the door open to watered-down versions, such as cocoa grown with one fruit species like oranges or one type of commercial timber tree. The risk is these being passed off as cocoa agroforestry that’s unable to deliver the benefits.

No one wants an edict on how many trees of which species should be planted at what spacing. But even companies buying cocoa want more precision.

One lamented to the Cocoa Barometer that in Ghana the guidance is merely to “plant up to 18 emergent trees (≥12 m height) per hectare providing permanent canopy cover corresponding to 30–40% shade,” while for Côte d’Ivoire, “regulatory authorities have defined a canopy cover by forest trees of 30 to 50% with no specific number per hectare.” 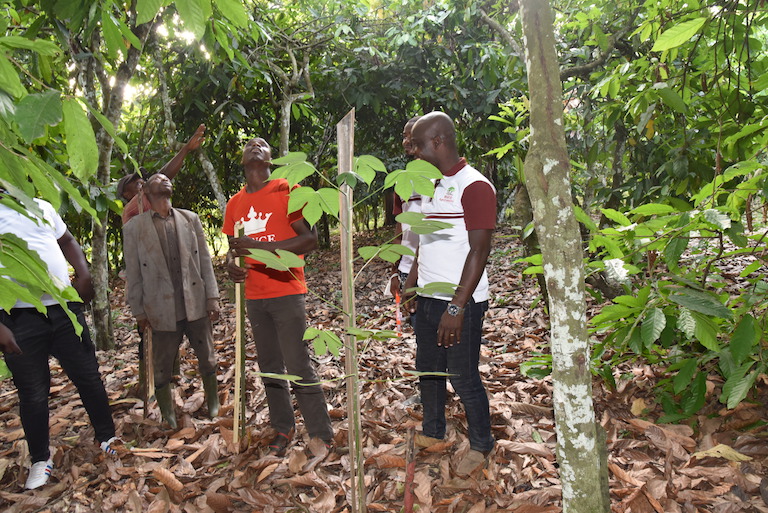 Farmers and ICRAF staff in a cocoa plot where an Akpi sapling (foreground) has been planted as part of a nascent agroforestry system: it will eventually break through the cocoa canopy and provide shade and other services. Photo courtesy of Gilberte Kofi/CIFOR-ICRAF.

My organization has worked on cocoa agroforestry in Côte d’Ivoire for 15 years and has a model to bring trees into existing cocoa farms (redensification). Where cocoa trees were cut because they were old or diseased, we have a model to grow new cocoa trees with other trees right from the start (rehabilitation).

Our guidance is clear: look for species that are wanted by the people who grow the cocoa. “To be truly successful, tree planting for economic, social, ecological, cultural, medicinal or aesthetic reasons should consider the objectives and needs of local farmers,” says World Agroforestry’s Alain Atangana.

Then select species from among those that the farmers highlight that have the ability to maintain or even improve cocoa yields, provide ecosystem services, diversify incomes, and support biodiversity. Then find additional species for as much variety as possible. Trees should be largely indigenous.

In early 2021 we started a project with 3,500 farmers in central Côte d’Ivoire to assist them to transition from zero shade cocoa to agroforestry by growing an additional 550,000 trees on their land, a total of 14,000 hectares.

We are promoting an additional 40 trees per hectare of cocoa of a dozen “companion” tree species. This is more complex than recommendations by certification schemes, some of which recommend 12 additional trees. And we did not pull the species out of a hat. We drew on evidence.

In 2018-19, Atangana and colleagues asked 683 cocoa-growing households which trees they had planted and which they had spared when they cleared land for cocoa. Their findings gave a baseline. 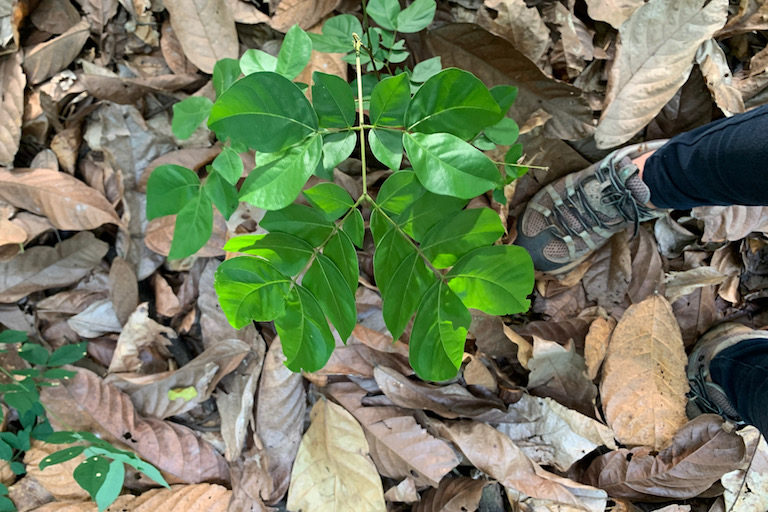 An Albizia grandibracteata wildling in a cocoa plot in Divo, Côte d’Ivoire. Naturally regenerating trees are important for a farm transitioning to cocoa agroforestry. Photo courtesy of Cathy Watson/CIFOR-ICRAF.

(If this is too much botany, welcome to the future. We are not getting out of the quandary we are in by being vague about trees.)

From these, we discarded species that might amplify cocoa diseases: kola nut, oranges, baobab, Ceiba pentandra, and mango, which was also deemed space-hogging with excessively dense shade. And we left off Triplochiton scleroxylon with its branches that break and damage cocoa.

Trees that came out as good for people and cocoa included avocado, Iroko, Akpi and the Terminalia species. We then added others we knew were also compatible and had reason to believe would provide new income streams and increase ecosystem services.

Our system for an existing cocoa “orchard” has three strata like a forest. Stratum one is the cocoa trees: 800-1300 per hectare is the advised planting density in Côte d’Ivoire. 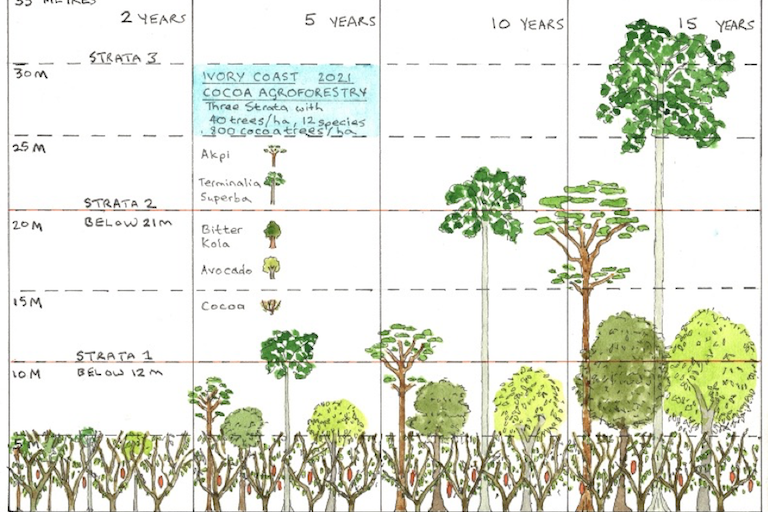 Here’s how four species would gradually break through the canopy of the cocoa (an understory tree) at about 5 years and eventually begin to form two strata. Sketch courtesy of William Pike.

Stratum two has, in each hectare of cocoa, 28 individuals that reach 20 m. The species include avocado and indigenous Kplé (Irvingia wombolu), the seeds of which produce shoots that are dried, pounded and used in local dishes, and bitter kola (Garcinia kola), which can reach 12 meters in 12 years and also has valued seeds, produces useful chew sticks, and is vulnerable on the IUCN list.

Stratum three has, in each hectare, 12 trees of native tree species that attain 30-50 meters: Fraké and Framiré  (Terminalia superba and invorensis), very fast-growing pioneer species that can reach 30 m in 20 years; Bitéi  (Beilschmiedia mannii) and Akpi that have protein rich nuts; and stately forest trees Iroko, Niangon (Heritiera densiflora) and Makoré (Tieghemella heckelli). The latter can attain 9-11 m in 20 years and is one of West Africa’s largest trees. Its seeds make an edible butter that is also a pomade.

Farmers are particularly excited about fast-growing, straight-boled deciduous Akpi, which improves soil, withstands high rainfall and drought, and has seeds that are a prized addition to soups, traded regionally and sold globally on Amazon.com.

None of this is easy. There is no central seed supply. We have trained and equipped local nurseries to raise the seedlings. They collect the seed from forest remnants and lone standing trees. Moving the seedlings to farms is a logistical mountain. But we have the support of cooperatives and French chocolatier CEMOI as well as ANADER and the CCC. 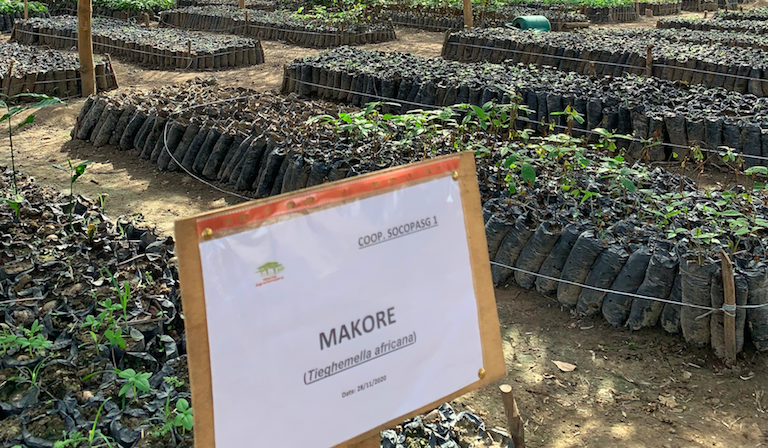 Cocoa agroforestry is here to stay but it is no small task. It is a feat of imagination for farmers to envision what their farm will become. But they are determined to introduce these trees.

It has become normal to talk flippantly about planting trees as though it is easy. Yet every single of these 550,000 trees will have to be positioned precisely on the farm. Distance between trees matters. It cannot be slapdash.

Let us all step up to recognize the complexity and dignify these projects with the funding they require. There is no turning back for countries that have lost their forest to a delicious everyday snack in the northern hemisphere.

Cathy Watson is Chief of Partnerships at CIFOR-ICRAF.