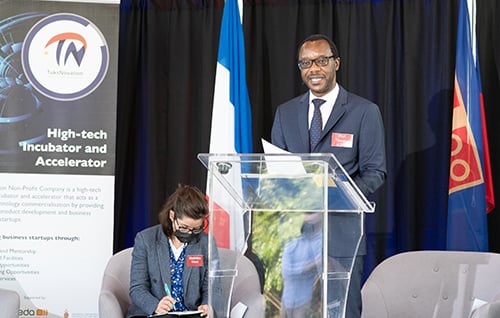 The University of Pretoria’s (UP) high-tech entrepreneurship incubator, TuksNovation, recently launched the Blue Ocean Corners Initiative along with several other stakeholders, including the Technology Innovation Agency.

Led by the French Embassy, the initiative provides training to key South African incubators in Blue Ocean strategy, which refers to a market where there is little to no competition.

With the support of the main municipalities, the aim is to empower SA incubators and their entrepreneurs to create new, inclusive services, exposing them to new local and global markets. The Blue Ocean Corners initiative follows the success of the first South African Blue Ocean Awards in May 2021.

The hybrid event was aptly hosted from UP’s tech-forward, state-of-the-art Engineering 4.0 facility, which focuses on research on smart transport, cities and infrastructure.

South African incubators and universities that are involved in the initiative are TuksNovation (UP), the University of the Witwatersrand’s Tshimologong digital innovation precinct and the University of Southern Africa (Unisa).

“We believe that the establishment of Blue Oceans Corners at our business incubators will enhance our capacity to support entrepreneurs during these challenging times,” said UP Vice-Chancellor and Principal Professor Tawana Kupe at the launch.

He cited the Global Entrepreneurship Monitor and its report ‘Entrepreneurial responses to the COVID-19 pandemic’ to illustrate that the health crisis had placed additional strain on entrepreneurship and businesses.

“[The report] suggests that in the vast majority of economies, the pandemic made more people close businesses, rather than start a business. This could be due to a variety of reasons, driven largely by COVID-19-related restrictions, health reasons or because of economic contraction. Clearly, the pandemic had a significant negative impact on businesses and most likely discouraged some aspiring entrepreneurs to start new businesses.”

Prof Kupe also took the opportunity to acknowledge the French Embassy’s support for this initiative. “Our partnership has continued to grow from strength to strength,” he said. “The support of the embassy for TuksNovation emerged out of a well-established relationship between UP and the French government. TuksNovation’s establishment of the Blue Oceans Corner at UP is partially supported by the French Embassy with an amount of €10 000 (about R170 000).”

Prof Kupe also made a definitive call to action to the French business community. “Through the embassy, French companies would be well encouraged to explore how they can take opportunities to increase foreign direct investment into South Africa through the Equity Equivalent channel.” 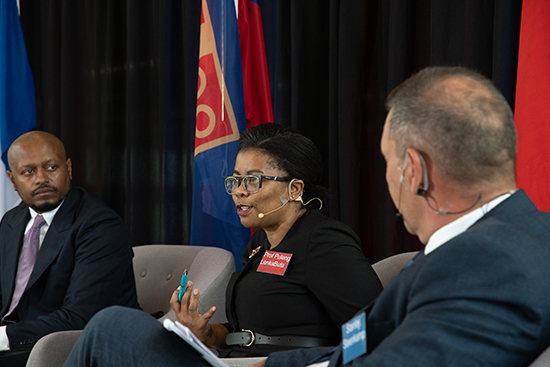 Asked about how business and academia can help support initiatives such as Blue Ocean Corners, Steenkamp said: “We take these initiatives seriously, because the incubation of today is how we get the results we want to achieve tomorrow. Our ethos as a company looks at the impact we have on the environment. I think this is something that’s very important.”

Prof LenkaBula offered perspective on how women entrepreneurs can be empowered. She began by explaining that her response would not only be informed by her gender, but also by her role as Vice-Chancellor of Unisa, which is one of the partner organisations of the Blue Ocean Corners initiative.

“Thinking through innovative ideas of how we can engender research, innovation and inventive aspects in the context of South Africa, the continent and the global arena [is part of our goal]. The second aspect I’d like to speak to is when we joined in through the participation of our students in the Blue Oceans competition, it is precisely because we as universities form students as intellectuals and inventors through knowledge. The outputs of their research have the possibilities of commercialisation.”

The next practical steps for the participating incubators are to have their business coaches trained by the Blue Ocean team and select a group of participating entrepreneurs who will go through a series of training sessions and induction on the methodology.