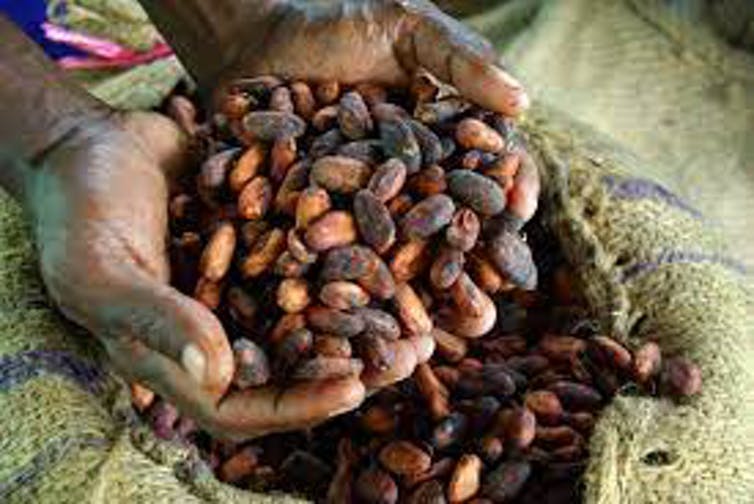 A cocoa pricing agreement designed to protect farmers in Côte d’Ivoire and Ghana from destitution is being circumvented by multinationals, the main buyers of cocoa beans.

Cocoa is the plant from which chocolate is made. Côte d’Ivoire and Ghana together account for 65% of global cocoa production, but farmers in these two countries earn less than 6% of the chocolate industry’s total revenue.

Cocoa growers’ share of the final product has reduced over the years as traders, brands and retailers have taken a bigger cut. For example, according to Fairtrade, when cocoa prices were high in the 1970s, cocoa accounted for up to 50% of the value of a chocolate bar. This fell to 16% in the 1980s and today farmers receive around 6% of the value. Cocoa farmers in Ghana now make roughly $1 a day (this often includes being subsidised by the Ghanaian government). Those in Côte d’Ivoire make around $0.78 a day.

The living-income differential programme, launched last year, was designed by both countries to help cocoa farmers escape poverty by adding a premium to the prevailing market price. But only a month after the launch of the programme, authorities in the two countries disclosed that confectionery multinationals were refusing to pay farmers the agreed living wage.

The US multinational Mondelz, for instance, was recently accused of paying a negative country differential. Last year another US firm, Hershey, bought from futures exchanges to avoid paying the differential and other companies are changing their buying patterns as well.

I have studied the relationship between growers in the two countries and global buyers in previous articles. As it is currently structured, the living-income differential programme is sending the wrong signal to cocoa farmers. And multinational buyers will benefit from it at the expense of farmers.

Just before the October 2020 cocoa growing season, Ghana announced that the guaranteed sum paid to cocoa farmers would increase by 28% per tonne for the new growing season. Côte d’Ivoire implemented a 21% increase in the price of the main crop of the 2020/2021 season.

These announcements were part of the living-income differential programme, which made headlines in 2019 when the two countries came together to form an agreement to provide a living wage to more than a million small scale cocoa farmers.

On the surface, the agreement looked like a cartel; it was even dubbed “COPEC”, a snide reference to the oil exporting cartel OPEC. But there are many problems with this arrangement. Both Ghana and Côte d’Ivoire were betting on the willingness of multinational companies to exhibit compassion by declaring their support. Instead of restricting supply to increase prices, the mechanism simply adds a premium of $400 per tonne to prevailing world market prices (which are mainly affected by the amount of cocoa in the market), without addressing market leakages and the effect of the premium on both world market prices and future supplies.

Unsurprisingly, there has been a general decrease in demand since the programme was launched, along with reports of confectionery multinationals’ buying indirectly to avoid the premium. Hershey openly diversified its cocoa sources the moment the living income differential came online. Other confectionery multinationals are doing the same indirectly, because the official demand is now significantly lower than in previous years. Multinationals are blaming this on the effect of COVID-19 on cocoa demand.

However, this explanation could be an excuse, because there is some evidence that confectionery sales have actually increased during the lockdown. Both Ghana and Côte d’Ivoire are likely to have a great deal of unsold cocoa at the end of the season, which will further reduce the market price.

Indeed, the Ivorian government has already announced a reduction of producer prices by 9% by April 2021; Ghana may not follow suit but the debt incurred by the Cocoa Board could well increase. Both countries have promised to name and shame companies that are not complying with the payments.

The obvious problem with the differential is that it is bound to increase cocoa supply (because more farmers will move into cocoa production) and reduce demand through official channels. Both outcomes will further increase the supply of cocoa and drive prices downward. The $400 premium or more could be wiped out of cocoa prices as a result of the extra supply that the programme creates.

One bargaining position available to African countries is to exclude from sustainability programmes any firms that fail to comply with the programme. Multinationals claim that sustainability programmes are for the good of farmers, but they actually perform practical commercial functions such as guaranteeing supply and giving certain firms the stamp of ethical sourcing needed to placate environmental and humanitarian groups and possibly avoid lawsuits.

One solution to the above problem, which both Ghana and Côte d’Ivoire are trying to solve, is to control and restrict supply instead of simply adding a price premium.

In 1987, when cocoa prices collapsed, the then president of Côte d’Ivoire, Félix Houphouët-Boigny, responded by implementing a withholding scheme. The country then controlled roughly 40% of the market. However, this was not enough to control cocoa prices. Scholars have often suggested that Houphouët-Boigny failed to control cocoa prices in the 1980s because new supplying countries (such as Malaysia) made up for the shortfall.

Restricting supply is the one sure way to influence price. However, this measure must be implemented differently from Houphouët-Boigny’s rash decision in 1987. Together, Ghana and Côte d’Ivoire control 65% of the world cocoa market; they would only need to team up with three other countries (Indonesia, Nigeria and Cameroon) to gain a share large enough to fully control cocoa prices.

However, given the current structure of the sector in both countries, this would be difficult to achieve for two reasons. First, the IMF has already liberalised the marketing system in both countries, so what Houphouët-Boigny did in 1987 would now be almost impossible. The second, and perhaps most important, reason is that the so-called sustainability programmes organised by multinationals in both countries are in effect productivity programmes, in that they are structured to increase production and supply. Hence, they are inimical to any attempt to control supply.

Why Culture Is Key In Tackling Malnutrition