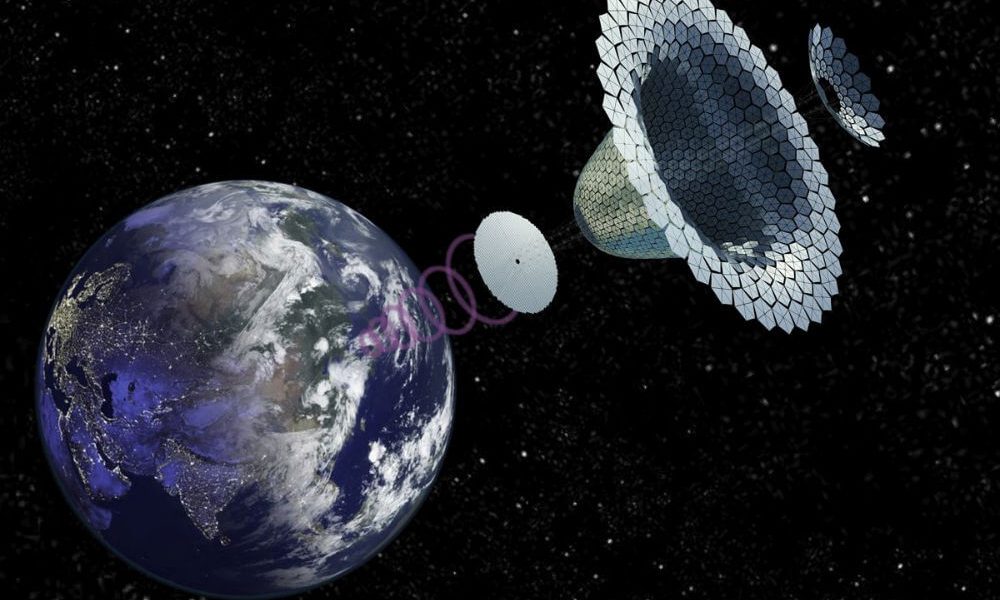 Over seven decades ago in 1941, Isaac Asimov wrote a short story, “Reason” (PDF), in which energy captured from the sun was transmitted via microwave beams to nearby planets from a space station. Flash forward to today, scientists are looking to make that very science fiction dream a reality for Earth.

There has been tremendous research on space-based solar power (SBSP) or space solar power (SSP) since the mid 20th century. Here is a great timeline of the various international studies and projects related to SBSP.

With SBSP, we could solve our energy and greenhouse gas emission problems with little environmental impact. Professor Sergio Pellegrino of CalTech recently said an SBSP system would receive eight times more energy than Earth does. With SBSP’s continuous massive energy output capability and the fact that our sun is slated to exist for another 10 billion years, we can safely assume we will not run out of this energy source anytime soon.

One of NASA’s most extensive studies ever devised, the Satellite Power System Concept Development and Evaluation Program (PDF) was specifically on SBSP and cost over $50 million, taking place from 1976 to 1980. Another fundamental study NASA funded to re-evaluate and understand the feasibility of SBSP was the Space Solar Power Exploratory Research and Technology (PDF) program. An enormous amount of solid research was accomplished in the study, but the general conclusion was that:

Large-scale SSP is a very complex integrated system of systems that requires numerous significant advances in current technology and capabilities… A technology roadmap has been developed that lays out potential paths for achieving all needed advances – albeit over several decades…
— John C. Mankins, 7 September 2000

With all that being said, let’s dive in to better understand this exponential technology and its viability.

So What Exactly Is Space-Based Solar Power?

Space-based solar power is the concept of capturing solar energy in outer space and transferring it directly to Earth or other nearby planets.

In simple terms, we would put some mechanism in outer space to capture the sun’s energy almost continuously and transmit that energy to Earth. This would happen day or night, rain or shine. Once we have received the energy on Earth at a rectenna (a special antenna for receiving energy), we can then easily distribute the power through our normal methods. Easy enough.

There are many ideas related to the SBSP mechanism configuration and architecture we could utilize. Location of the SBSP system, satellite architecture, energy collection, and energy transmission are a few basic areas to look at when understanding the different SBSP systems. Given the number of proposed concepts, we will only look at a few of the more notable options.

Where exactly will we put this SBSP system? Geosynchronous orbit (GEO), mid Earth orbit (MEO), and low Earth orbit (LEO) are a few of the proposed choices. The most promising is utilizing GEO due to the simplistic geometry and alignment of the antenna to rectenna, scalability, and nearly constant power transmission. The main problem with GEO is the large amount of radiation exposure. General space hazards like micrometeors or solar flares also pose a threat.

From creating lunar factories with mass drivers or mining asteroids to fabricate these self-assembling SBSP satellites, creating autonomous space-based factories is still rather challenging. Designs built in space utilizing local and free materials (e.g. lunar materials) to build these SBSP systems allow for different concepts compared to those that can be much more complex to construct on Earth.

One interesting setup we are currently ahem, building on Earth, is a modular roll out solar array being developed by Caltech and Northrop Grumman. The researchers discuss their functional prototype in the video below.

Another interesting concept is from private company Solaren. They plan to experiment in the future with building a 250 MW SBSP solar array plant in GEO. They even struck a deal with PG&E, California’s biggest energy utility company, in 2009 to provide space solar power (PDF). Solaren also maintains multiple patents and will definitely be an interesting player in this field to watch for new developments.

Even NASA’s SPS-ALPHA via Arbitrarily Large Phased Array concept (developed in 2012) has been getting some recent attention from John C. Mankins, one of the top SBSP experts in the world.

The two basic concepts related to energy collection are utilizing photovoltaics (solar panels) or solar thermal. One concept of solar thermal essentially captures solar energy by using mirrors to concentrate light and heat up a liquid. This in turn spins a turbine to generate electricity (e.g. by generating steam). This concept allows for a potential weight advantage over solar panels, as it could reduce overall mass per watt. The majority of concepts, however, look to utilize ultra lightweight and highly efficient photovoltaics in their prototypes.

Microwave power transmission is the typical choice in SBSP designs due to general efficiency, but utilizing laser power beaming is another highly regarded option due to lower weight and cost. However, there is the first initial thought of potential misuse wherein one could turn either choice into a space weapon (e.g. a death ray). Safety protocols can easily deter this unlikely threat given the technology being utilized. Designs incorporate microwave transmission power levels to be within OSHA’s required workplace exposure limits. There would be no worry of microwaving cities and all the living beings within it. A simple handshake between antenna and rectenna would disable the transmission if it came off course.

Now that we have a better understanding of what SBSP is, let’s delve into its biggest limitation.

There is always a catch. Some general safety issues were noted above, but the main impediment is related to the cost in sending all the materials required for the SBSP.

Current cost estimates to send roughly 1 kg of payload into space vary from $9,000 – $43,000 depending on the rocket and spacecraft utilized.

If we look at sending up solar panels alone, the low end of the spectrum for launch costs of an ultra-lightweight 4 MW SBSP system is 4,000 metric tons (per Wikipedia). However, Energy.gov estimates a SBSP to be more likely in the 80,000 metric ton range.

While these numbers are not totally accurate to state-of-the-art systems and are simply an estimate, we are still looking at a very rough low cost of $36 billion up to a slightly more expensive cost of $3.4 trillion. Utilizing a lunar or asteroid factory suddenly seems within budget.

NASA’s SERT study results show that space solar power is “economically viable” if recurring launch costs range from $100 – $200 per kg of payload. While prices continue to fall thanks in part to SpaceX’s reusable rockets, there is still a long way to go. Nonetheless, this trend will follow Ray Kurzweil’s Law of Accelerating Returns and the prices of these launches will continue to come down, from billions to millions to thousands and, finally, into the hundred-dollar range.

Needless to say, it is not the tech that is the problem, it is the cost.

The Future of Solar Energy

SBSP’s ability to provide clean, reliable power for the planet 24/7 at a cheaper cost than any other energy source is real. It will take decades of investment, building, testing, and successful implementation before the system can begin to recoup its initial costs.

Isaac Arthur explores this concept in this incredibly informative video, and looks beyond the next decade of where this exponential technology can take us.

Nonetheless, one key component to moving SBSP forward as the de facto energy source is the right political climate, including leaders to drive this innovation. Bruce Dorminey from Forbes sums up this general sentiment to any future world leaders by stating:

If President Trump were to champion space-based solar energy as a means of delivering unlimited, renewable electricity from Earth orbit, it’s arguable that his administration could leave the US and the world at large with a revolutionary new source of energy.

Where Do We Go from Here?

Politics aside, if we get SBSP (or nuclear fusion) successfully running in the next decade, some of these sci-fi concepts could become reality:

While there are still many unknown factors related to SBSP and its implementation in the coming years, one thing is certain: political implications in the energy sphere will be critical for SBSP to expand beyond the concept phase and into a new type of reliable renewable energy. Ushering this new phase of energy into the world would change society in profound ways.

We are a participant in the Amazon Services LLC Associates Program, an affiliate advertising program designed to provide a means for us to earn fees by linking to Amazon.com and affiliated sites.