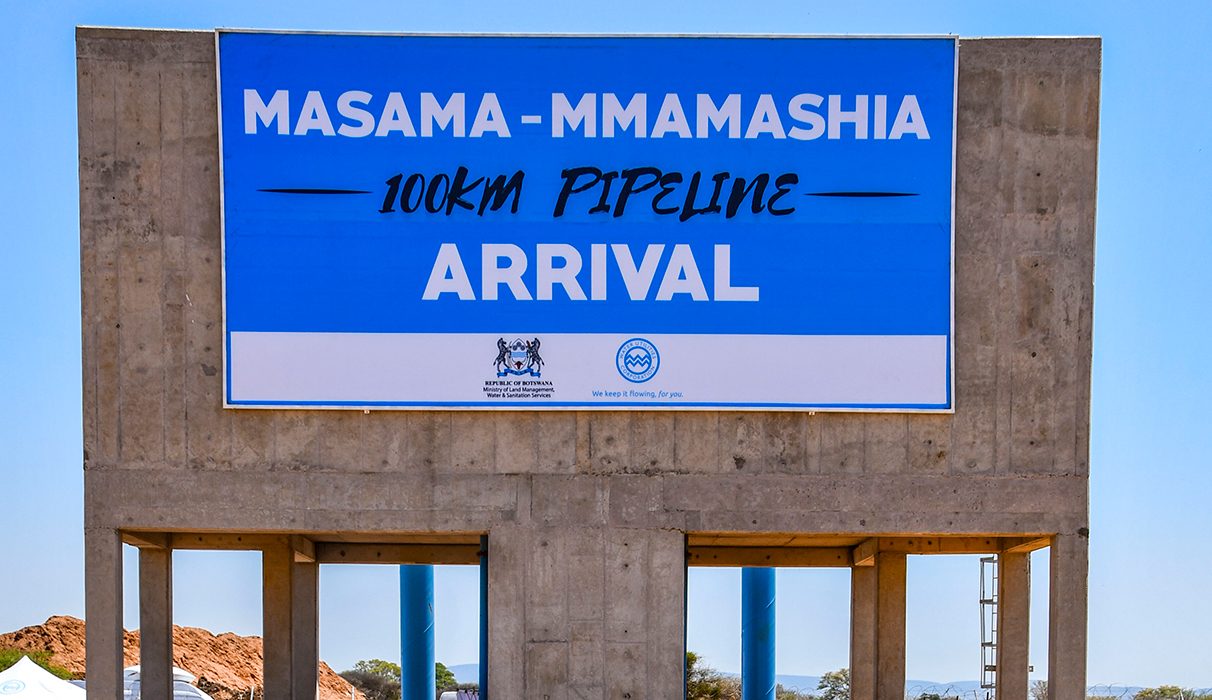 Dr Mokgweetsi Masisi, President of Botswana has praised Khato Civils for delivering the 100km-long Masama-Mmamashia pipeline ahead of schedule, averting a water supply crisis that would have crippled business in the capital city of Botswana.

Engagement with local communities and a commitment to creating local job opportunities were key elements in Khato’s successful project delivery. The approach won praise from the highest levels of government.

President Masisi said “I wish to urge other contractors to complete government projects on time and within budget.

“The pipeline did not only improve the reliability of water supply but also enhanced the socioeconomic status of the people living along the pipeline corridor.

“I am informed that more than 700 Botswana, both skilled and unskilled, were employed during the construction of the project.”

Good morning. I am deeply honoured to be at the Mmamashia Water Treatment Plant this morning to officially open the 100km Masama-Mmamashia Water Pipeline & infrastructure. This is yet another project delivered. Next will be Gamononyane-Molepolole & Lobatse Water Masterplan. 🇧🇼 pic.twitter.com/tTslyJdiqp

Facing Up To Botswana’s Water Crisis

Globally, leaders are searching for solutions to an ever-growing water supply crisis. The world faces a severe water shortage by 2030, and with climate change exacerbating the situation, Africa is likely to bear the brunt.

Over 300 million people in Sub-Saharan Africa lack access to clean drinking water and over 700 million live without access to good sanitation.

According to the World Resources Institute, Botswana faces the highest levels of water stress in Africa.

Botswana is situated on an arid landscape and has suffered from a perennial water problem for many decades. It enjoys scarce surface water supplies and a flat terrain that is mostly unsuitable for reservoirs.

In 1990, Botswana acknowledged that it needed to upgrade its water infrastructure and began a 30-year plan. However, implementation of the plan proved challenging.

In 2015, Gabarone started experiencing rolling water outages. Climate change, population growth and demands from industry and farming were combining to place unmanageable stress on the water supply. It was a situation that distressed residents in the capital city of a nation considered one of the wealthiest and best-run in Africa, threatening to reverse decades of economic growth.

At the time Botswana had access to water sitting in dams in the north but faced an inability to move it down to Gaborone in the south. The real problem facing the nation was a lack of infrastructure, rather than a lack of water.

The North-South Carrier pipeline project was established as Botswana’s means of moving that water from the north of the county to the south. The NSC is the largest engineering project ever undertaken in Botswana and was divided into two phases called NSC-1 and NSC-2.

However, Ntshambiwa Moathodi, Technical Services Director of the Water Utilities Corporation explained “NSC 2 was supposed to be completed in 2008 but that hasn’t been the case. The situation necessitated the construction of the Mmamashia project to address the water shortages in Greater Gaborone.”

Given the failure of successive administrations to resolve the situation, water supply became the key issue in the 2019 elections and a major campaign item for all the presidential aspirants. The Emergency Water Security and Efficiency Project, with its deadline to address water shortages by 2021, was a central point of national debate.

The issue became a key campaign promise for the current administration, helping it win the 2019 election.

Hon. Kefentse Mzwinila, Minister of Land Management, Water and Sanitation Services, described the task facing Khato Civils as an emergency project at a time of crisis, saying “Botswana is dealing with a serious water deficit and the contractor is taking on an emergency project. The crisis has been compounded by the pandemic and the situation has been dire.

“If the water crisis is not addressed soon, other sectors of the economy will be hampered. The planned Lobatse Special Economic Zone focusing specifically on meat and leather beneficiation will be dysfunctional without adequate water supply and thus hinder employment creation.

“Some of the infrastructure projects being undertaken such as the construction of the Moshupa Hospital will also be in jeopardy without enough water supply. Other projects are also dependent on the contractor to complete the water project on time.”

The 100km pipeline project, if delivered according to plan, would resolve the 49 million litre daily shortfall facing Greater Gabarone by bringing an extra 74 million litres of water per day to the area.

Khato Civils entered the project tasked with ensuring the national government would deliver on its election promises to the people of Botswana. 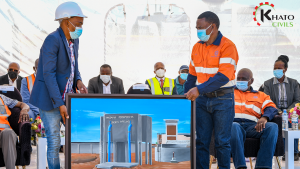 Khato Civils CEO Mongezi Mnyani said of the project “The biggest highlight of 2021 was working to ensure we complete the 100km project there on time. It’s been a challenging period with lots of sacrifices that have ended up paying dividends. I am glad to say that water is now flowing freely in the greater Gaborone area thanks to the project. The project had many detractors in the beginning but we rose to the occasion and got it done. We solved the challenges that we came across and ended up completing the project in record time.”

The success of the project can be put down to three pillars that define Khato’s approach to work: 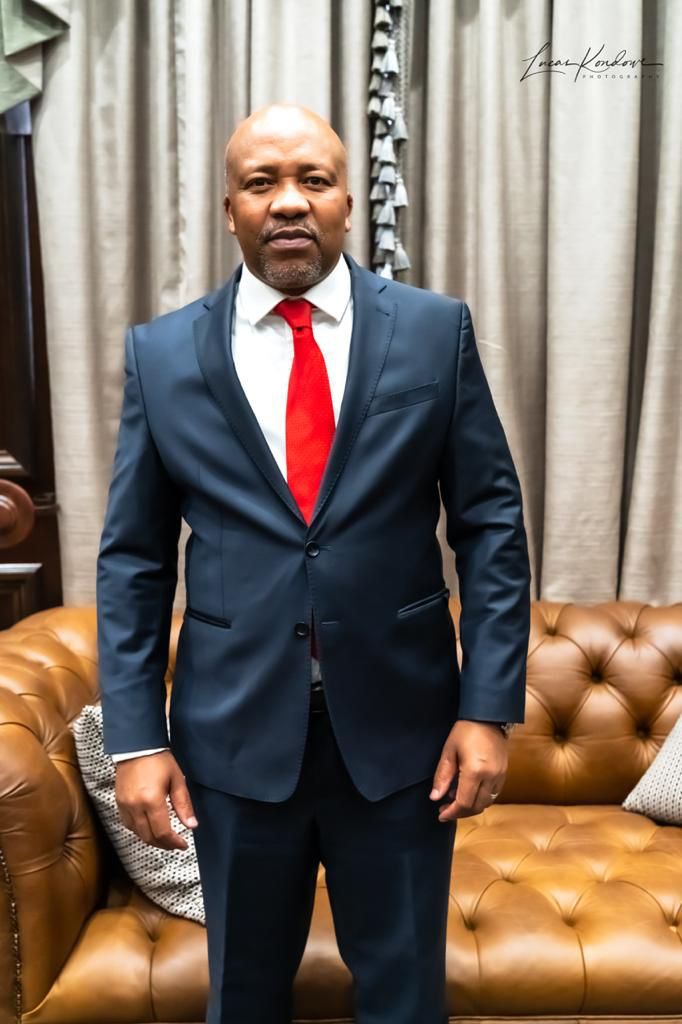 CEO Mongezi Mnyani explains the three pillars and how they were implemented on the ground in Botswana.

“Our approach was to reduce cases of conflict as much as we could. Our recruitment system had to change and become more inclusive.

“We ensured that we had workers from each village where the pipeline was crossing through. We had to train all the recruits because some had not worked on such a project before. We have adopted a policy that ensures we hire locals wherever we work. We can’t just parachute our staff from site to site without being sensitive to the employment needs of locals.

“We have seen conflicts arise where locals feel international contractors and foreign interests are being imposed on them without any consultation. International companies are welcome if you ask me, but they must be willing to listen to locals while also involving local contractors. Consultation must begin before the project has begun and it must be a series of meetings.

“Anyone who thinks that one meeting with local leaders and other stakeholders will do may just have to learn the hard way. We as a company have a division that meets with the local leadership in the places we work. The members of staff we send to those meetings are always people who speak the language and have an idea of the cultural norms.

“We love to initiate dialogues and listen to their needs and concerns. We also screen local people, train them and hire them for our local projects. We also keep people posted on our progress and ensure that we empower the locals. We empower the locals by spending money with local businesses for materials, food and even accommodation.”

Mr Mnyani further explains in a feature on AfricaLive the five threats to African infrastructure that come from the lack of local participation and leadership in infrastructure projects. 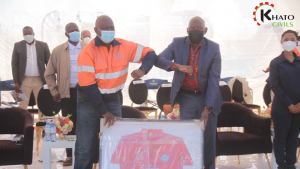 “We have improved our skills as well when it comes to dealing with our workers. Hiring people on payroll is not that efficient for us because they clock out when their hours have passed. Some of the local labourers have made a habit of clocking out at 5 PM whether the work for the day is done or not. We have tackled that by grouping workers into consortiums.

“The consortiums are paid an agreed amount when certain project goals are hit. Our workers are now led by goals and incentives and not by time worked. This has helped us move faster while also getting high-quality work done. We have also improved our communications with suppliers. Suppliers can hinder a project if they don’t supply materials on time and that has to be addressed through forming great relationships. It’s all about improving skills to make sure we are better with every coming project.”

Ownership of State of the Art Technology

“We acquired Tesmec Trencher machines which have helped set us apart from our competition. The machines helped us trench faster and move quicker. Each of the machines, which we acquired from Italy, can trench three kilometres a day on soft terrain and one and a half kilometres in hard rocky terrain. This is a big improvement from our previous capacity.

“We acquired eight of them with two deployed here in South Africa, four in Botswana and two in Malawi ahead of a new project there. The machines are efficient and easy to use with the ability to do three to five kilometres a day. We love their ability to handle rocks because they save us the additional costs of blasting through rocks.

“Using the latest technologies is critical for the success of any construction project. We must also venture into new areas that are beyond our comfort zone for us to grow. New trends are also worth looking at especially when it comes to new technologies from Europe and Asia. We have to emulate the Chinese for example because of their success in projects. A lot of their success has to do with the constant adoption of new technologies which help them work fast without compromising quality.”

Mr Moathodi added “You will see in the next two years, we will be delivering similar projects just as cost-effective, there is no doubt we can bring down the cost of mega water projects”

Hon. Kefentse Mzwinila, Botswana’s Minister of Land Management, Water and Sanitation Services, spoke of the impact that the project will have for the people of Botswana saying that “there are significant water shortages in the area and the completion of this project will alleviate those.”

The project will bring a significant socio-economic benefit to the region and Khato Civils are working to attract funding to address Africa’s annual $35bn water infrastructure deficit. In Forbes Africa magazine, Khato Civils Chairman Simbi Phiri highlighted that every $1 spent on water infrastructure brings between $3 and $24 of economic benefits.

However, it is by creating economic opportunities for Africans and mentoring younger firms in the sector that Khato Civils looks to build a legacy on the continent.

Chairman Simbi Phiri explains “I absolutely believe that African business leaders have a responsibility to reinvest in the next generation. If we don’t, there will be a major vacuum. If my generation is on its way out, there must be a new one coming in.

I want to ensure that more than ten big black-owned construction companies are built, thanks to my influence before I retire.  I emphasise black-owned, to counter racist notions that have been propagated in the past that dark-skinned people cannot build. Lack of entrepreneurial flair amongst black people is caused by a shortage of entrepreneurial black success stories.

When black people succeed in their numbers, it will change a lot of mindsets. Local people succeeding will ensure that we have local companies ready to participate in national development. This will help avoid a scenario where only foreign companies are building our infrastructure. We should never allow any foreign companies to come and build infrastructure in Africa without the participation of local firms. Our local firms must also have the drive to learn and the ability to apply themselves properly.

We plan to expand into 42 African countries and give 30 per cent of each project to local companies. We plan to allocate resources to a few local companies in each of those countries to expose them properly. They will come in and see how we work and how we prepare. “

On Instagram: Simbi Phiri explains what is needed to deliver on African infrastructure megaprojects.